We be causin' a mosh pit like Cro-Mags at L'amours... 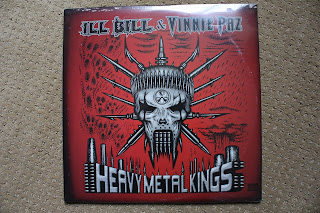 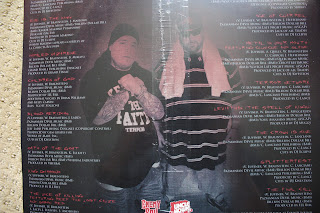 Here is my sealed copy of Heavy Metal Kings which is Vinny Paz of Jedi Mind Tricks and Ill Bill of Non-Phixion. Pretty solid album, I wouldn't say its a soon to be classic or anything like that, but one of the better hip hop releases of 2011. I'm surprised more hard core kids don't fuck with these dudes. They use a ton of hardcore references in their songs, which is fucking awesome. "I'm hardcore like Paul Bearer in Sheer Terror" - Vinnie Paz, or "Where to go, we gotta know, like Harley Flannagan" - Ill Bill.   Vinnie Paz is even rocking the Keepers of the Faith shirt on the back cover! My favorite song on this album is "Age Of Quarrel", with the "We be causin a mosh pit like Cro-Mags at L'amours" chorus, here it is below:


If you don't have anything by these guys I would recommend Jedi Mind Tricks "Legacy of Blood", "Visions of Ghandi" or "Violent by Design" or Ill Bill's "What's wrong with Bill?" first. Don't get me wrong, this is a solid release but some of the tracks seem rushed and in my opinion they should have just kept them on mix tapes. I bought this when I went to see them at Slim's in SF last year. They had Danny Diablo (Lord Ezec) from Skarhead/Crown of Thornz open for them on his hip hop shit, and wow that was really sad. He really needs to stay with the hardcore shit, he has no business at all in hip hop. I felt bad cause half the crowd was just clowning on him the entire time. Heres some footage from Heavy Metal Kings' set that night on my youtube channel:

Posted by Across Your Face at 3:26 PM