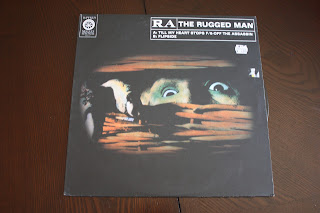 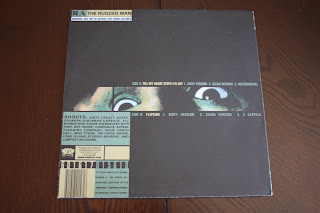 Here is an old RA The Rugged Man single on Rawkus Records. This is unfortunately the only Rugged Man vinyl I have. All of his Vinyl is very rare and usually gets blown way out of proportion any time you see it on Ebay. For those of you that aren't familiar with RA you should really check him out. He was one of the first white MCs to really gain credibility in the NYC hip hop scene. This dude is an absolute beast, and even Biggie Smalls said that RA was one of the "illest ever". I stumbled on this in the dollar bin at my local record store. The album cover is a bite off "Basket Case" an awesome 80s horror flick, which makes this album cover even more awesome. "Rugged films"? I wonder if that influenced his name? Here is a video for "A Star is Born" which is funny as fuck! In it he goes over a little history of his career, like getting signed to Jive way back in the day and then getting dropped and some of his legal troubles. This song is actually like 5 years old but he just made the video recently. This video is seriously so funny, my favorite parts are the white record executive saying "I'm practically black!" And Prince Paul next to him agreeing, RA at the end kissing the broom and when the white executive is ripping up the posters and then calls in ICP - "the real talent" HAHA. Must see!

Posted by Across Your Face at 2:26 PM