I ain't no joke, I used to let the mic smoke 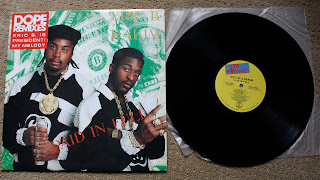 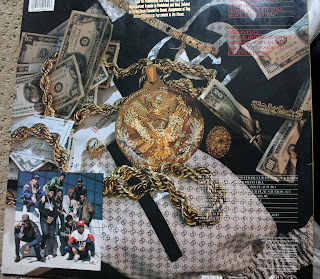 Here it is, one of the best hip hop records ever made: Eric B and Rakim's "Paid in Full". This is an original pressing on 4th and Broadway with the Yellow labels and "Dope Remixes" Sticker. It also has a gold promo stamp on the back. I don't have a great story behind this, I had been looking for one on ebay for a while and finally got this one for under $20. Sometimes patience pays off, I had to sit on the sidelines will some broke $70. Like most hip hop original pressings, this one was probably pressed a million times so it's definitely not as rare as an old hardcore record, but original pressings still aren't always that easy to come by in decent condition. The overall quality of the jacket and vinyl seems very poor. Similar to my Wu-Tang press below, this vinyl is super thin and flimsy. The jacket itself seems thinner than normal, even considering its age. Gave it a spin and it doesn't sound that great either. Oh well, I'll stick to the mp3's I guess.
Posted by Across Your Face at 11:17 AM

Email ThisBlogThis!Share to TwitterShare to FacebookShare to Pinterest
Labels: Eric B and Rakim, Hip Hop