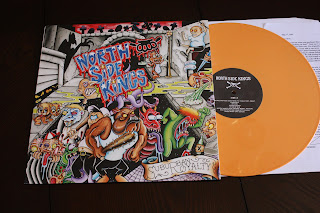 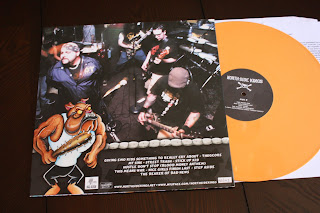 My old band played with these guys in San Jose, CA when they were out here on tour in 2007. They were real good live and super cool guys. This record comes with just a simple white piece of paper as the insert with a little story behind the record. According to the insert, there was only 300 total of this record pressed, 100 each on orange, white and green. On the back of the record it is hand numbered #90/103. It says in the insert that the "next pressing will be black and all of the records will be numbered." I don't know if they ever ended up pressing those or not, I really haven't heard anything about North Side Kings since 2007. I have never seen the other colors but I love this color, it looks just like a creamsicle.

But what North Side Kings may be most famous for is that their singer Danny knocked out Glenn Danzig on film! I don't know what the whole situation was with that, but all I can say is that when I met the North Side King guys they were all super cool and friendly. Here's the video below:

Posted by Across Your Face at 3:59 PM

Email ThisBlogThis!Share to TwitterShare to FacebookShare to Pinterest
Labels: Hardcore, North Side Kings