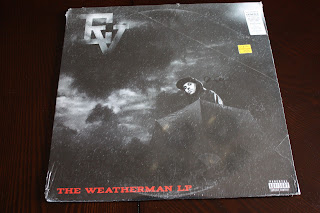 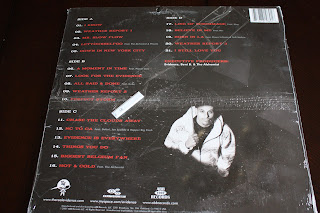 So exactly one year ago today was the Earthquake and Tsunami in Japan. I will never forget where I was when I first heard. I was at the Catalyst in Santa Cruz, CA seeing Evidence and Fashawn when they announced on stage what had happened. The whole atmosphere of the show changed after that and it was much more solemn. Here is a sealed copy of "The Weatherman" by Evidence, found it for only $5, ironically at Streetlight Records in Santa Cruz. Here is a video I shot on my phone of Evidence that night exactly one year ago performing "Mr. Slow Flow" from the Weatherman LP:

I'll never forget being in Santa Cruz the night it happened because the next day Santa Cruz was majorly effected by the Tsunami, with surges causing destruction and boats to be carried out to sea or crashed into each other in the harbor. That day people were actually panicking and leaving Santa Cruz thinking another tsunami might hit on the pacific coast, and I remember how Highway 17 was gridlocked with people trying to get out of Santa Cruz. Pretty surreal. Here is some footage I found of the destruction in Santa Cruz:

Obviously the damage of some boats is nothing compared to all the lives lost in Japan and my heart goes out to them. This just put it in perspective for me, the fact that mother nature is so powerful an event half way around the world was felt all the way out here. Ironically, I'm going back to Santa Cruz tonight on the one year anniversary to see Backtrack and Alpha & Omega.
Posted by Across Your Face at 2:27 PM