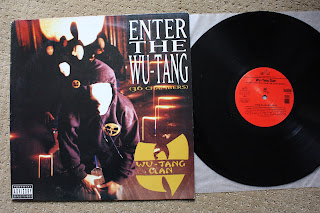 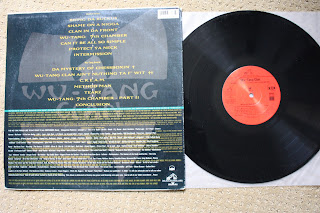 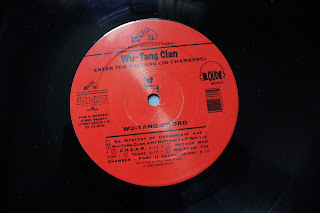 Here is my original pressing of Wu Tang's 36 Chambers. Even your grandma probably knows most these songs so theres not a whole lot to be said. One thing that 80's to early 90's hip hop original pressings are known for are their terrible quality. Most of the records are so thin they feel like a fragile piece of paper, and its always a bunch of long songs crammed onto ONE record so the sound is usually as thin as the record itself. That's why all hip hop records now (and represses of these old records) are all released as 2LPs. This copy isn't necessarily rare, I'm sure there were a million pressed, but it has been repressed a million times also so it's always nice to own the original. My copy is a little beat up, but there is no promo stamps, saw cuts or cut off edges or anything like that so it was a regular consumer copy at one point.

Posted by Across Your Face at 3:56 PM