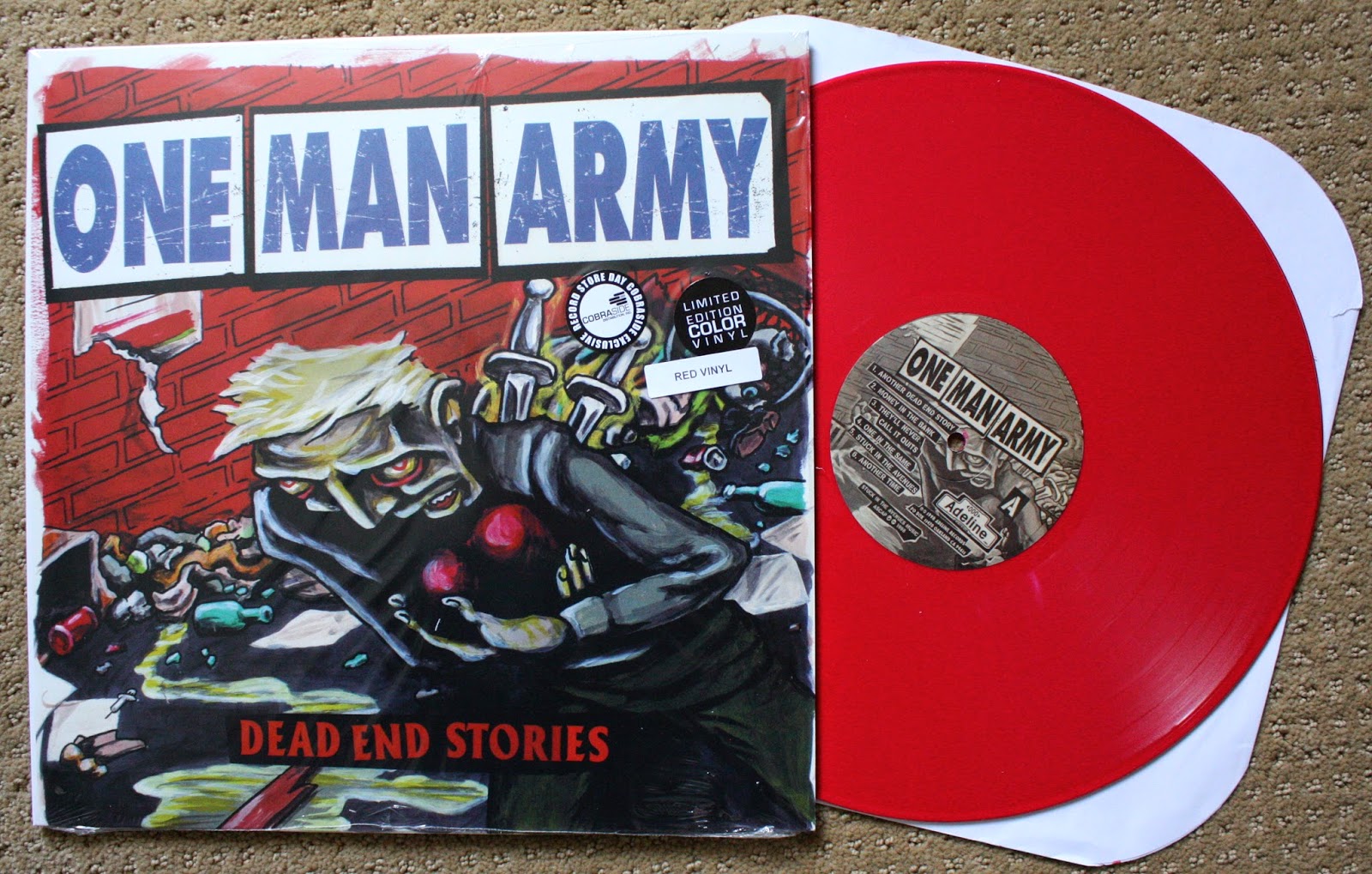 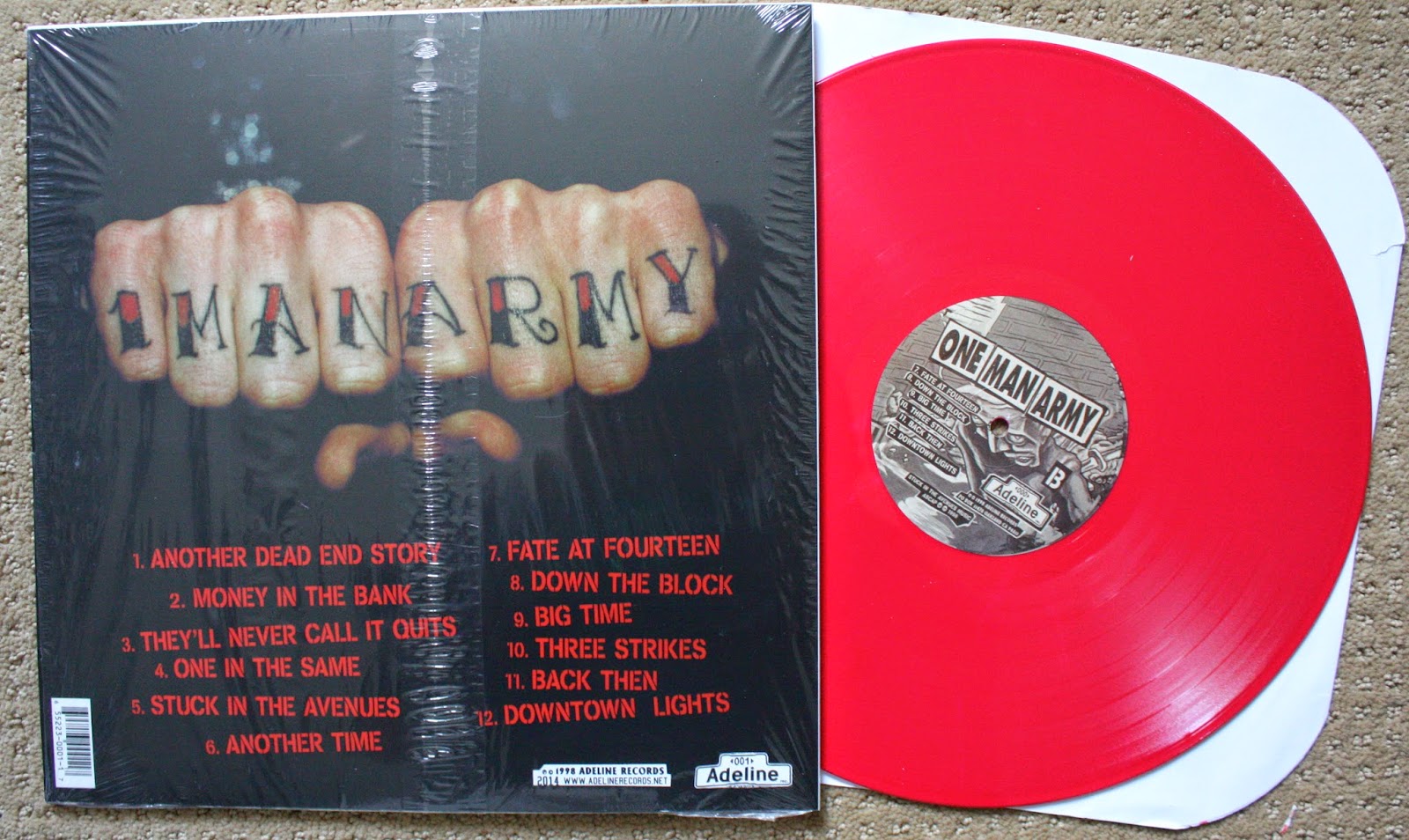 One Man Army's "Dead End Stories" was another re issue that I was drooling over for Record Store Day. I have never been fond of One Man Army's later poppy releases but I've loved "Dead End Stories" since it came out. This album has that unique San Francisco late 90's/early 2000's street punk sound similar to Reducers SF and Swingin' Utters. Over the last decade, this album has logged countless hours of listening time to me. I can pretty much recite the lyrics for every track off the top of my head. Every single song on this album is a banger. I think this album never got the "street cred" that it deserves because it was released on Adeline Records, which was started by Green Day's singer of course. If this was released on TKO Records, I think it would have been forever remembered as one of the best street punk albums of all time.

Either way, I have never owned a copy of this on vinyl so I was really happy to pick this up. As far as I know they only pressed it on red. I'm not sure of the pressing info on this, but I'm assuming it's in the thousands. This wax takes me back to Freshman year of high school all over again!

Posted by Across Your Face at 2:47 PM No comments: 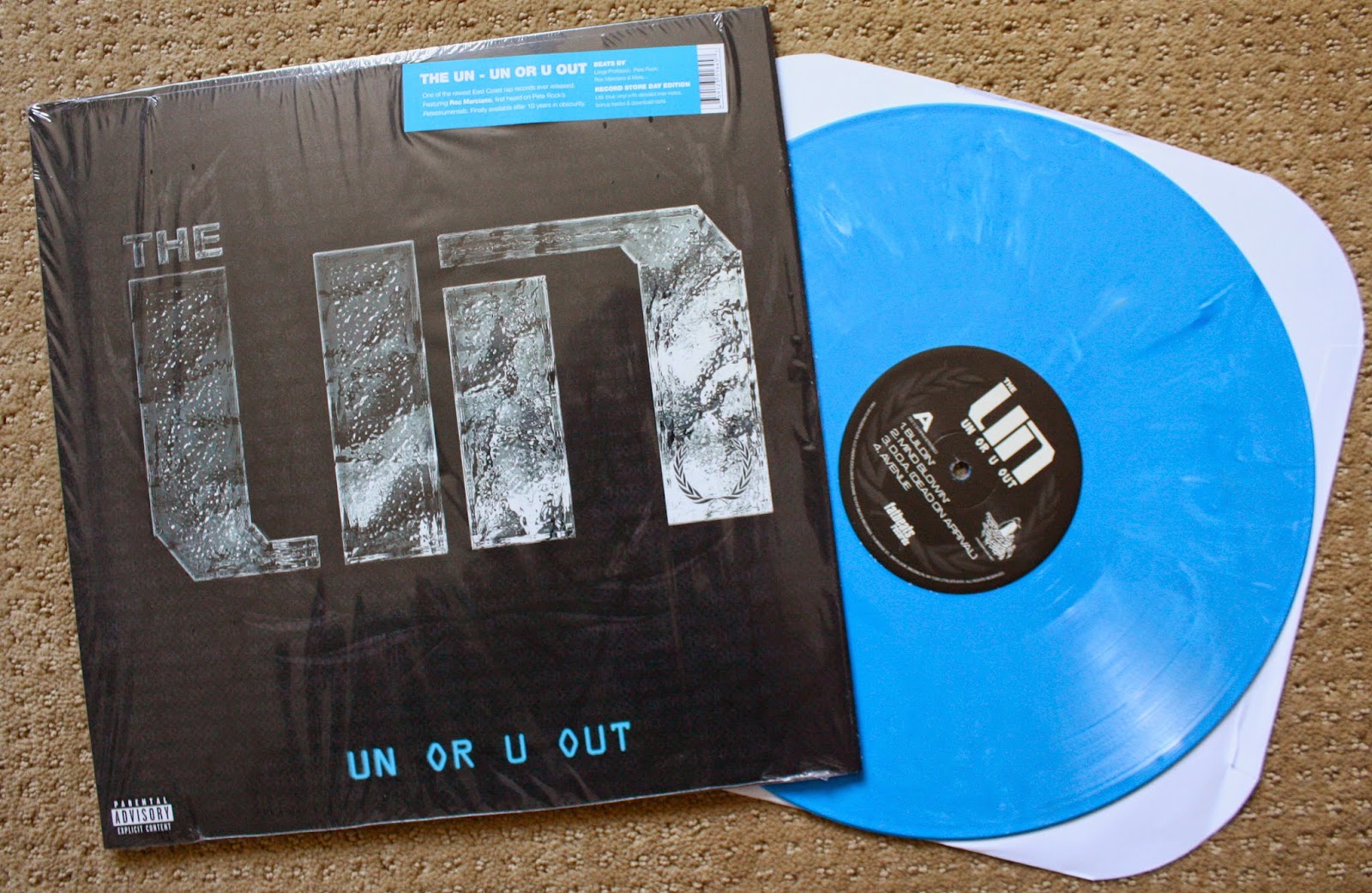 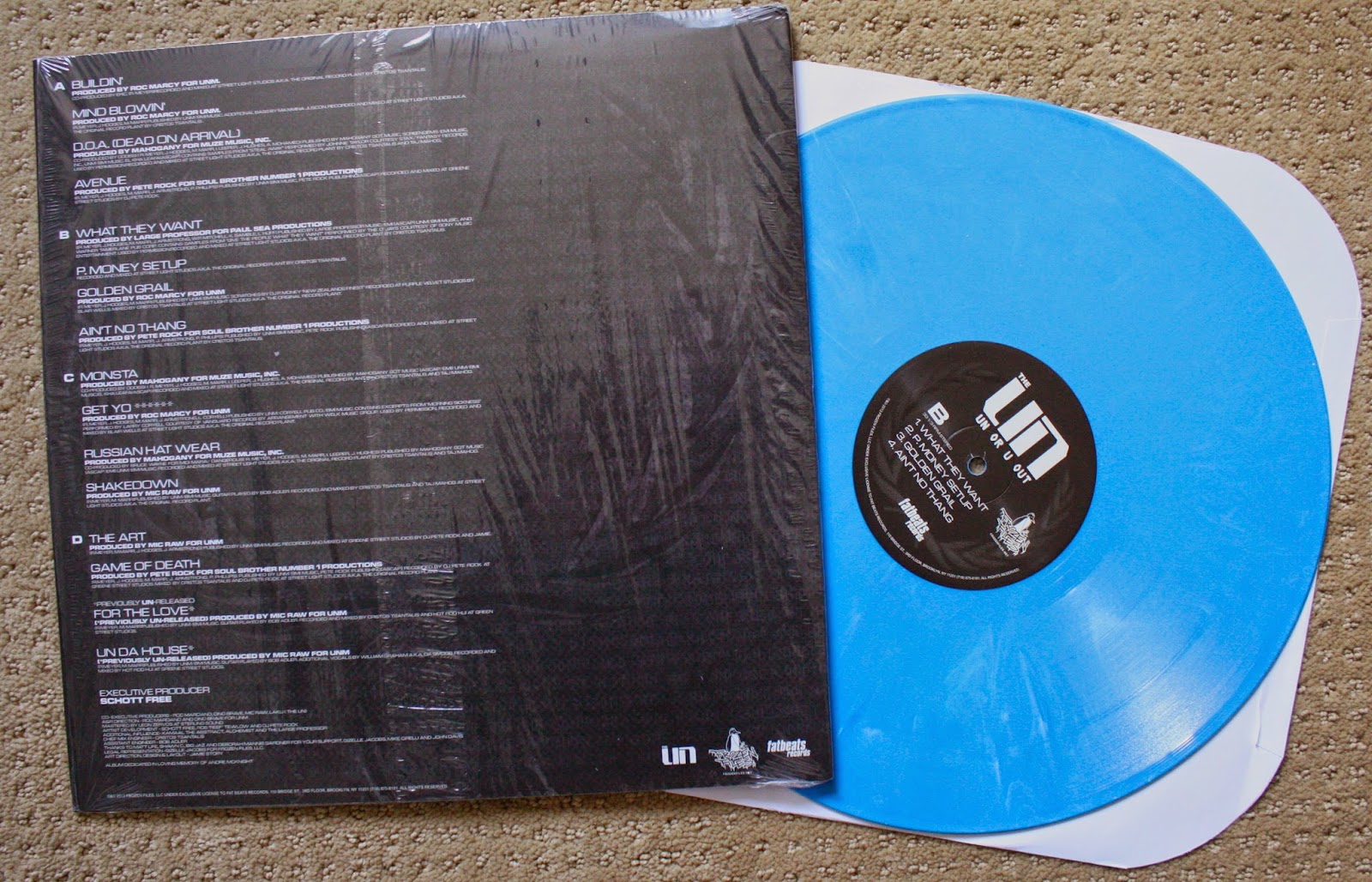 This years Record Store Day was very good to me. I never left the house, and did all of my shopping online. I ended up getting (almost) everything that I wanted, and a few releases I really wanted came out. This was the 2nd most important release for me to get. Above is the limited blue vinyl version of The UN's - UN or U Out album. The UN was a New York rap group fronted by one of my favorite rappers ever Roc Marciano before he went solo. This album is an underground classic and has been pretty much impossible to find since its release in 2004. Fat Beats decided to release this for the 10 year anniversary of this album. When I heard Fat Beats would be releasing this a few months back I was ecstatic. I was even able to grab the limited version on blue vinyl which sold out really fast. 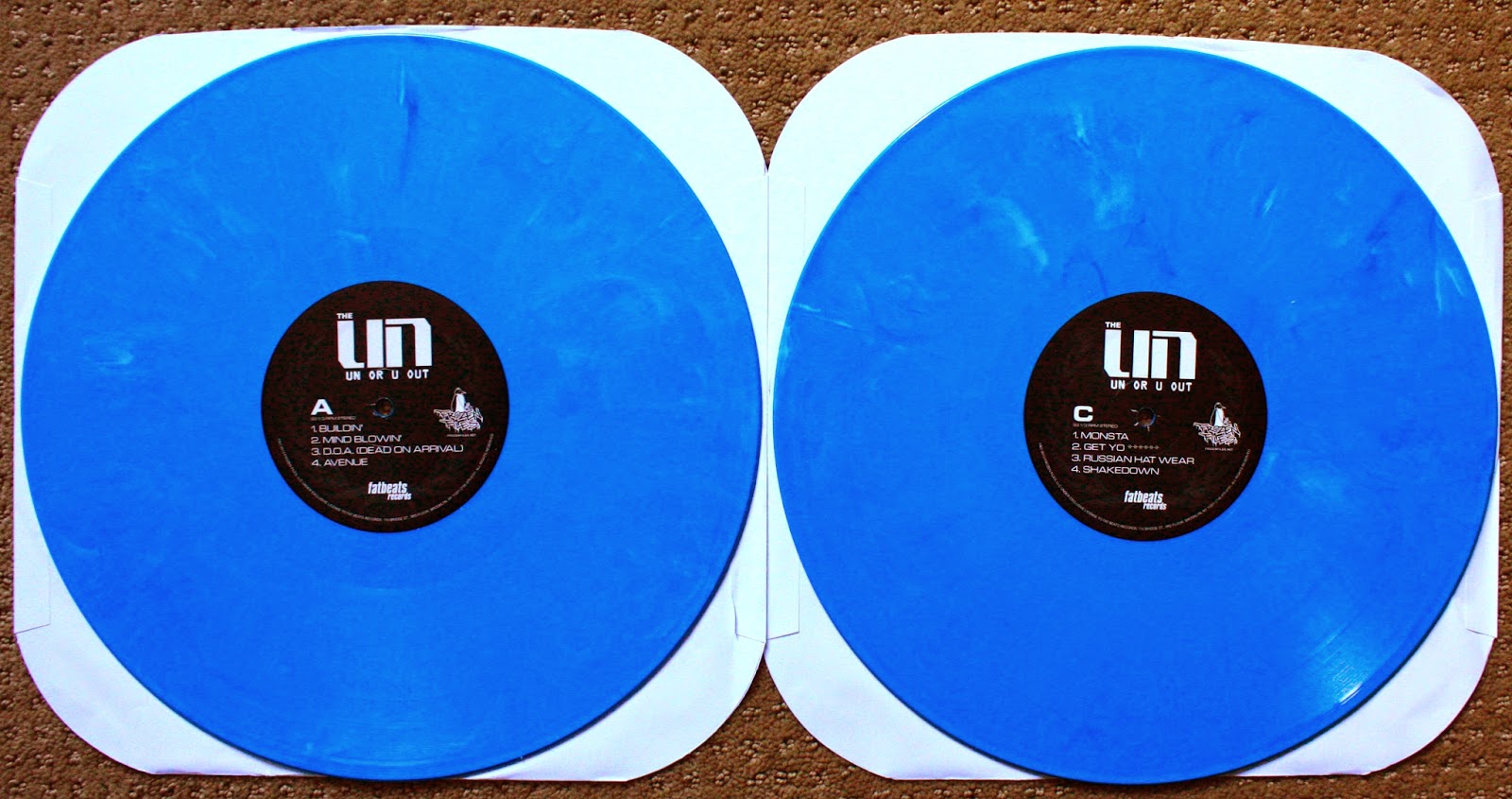 This is such a cold ass album. Roc Marciano is simply one of the best MC's to ever grace the mic and it's great to hear him early in his career with the UN. If you get a chance to pick this up, do it!

Check out "Ain't No Thing" above. This is true hardcore gutter rap, not for the weak or faint of heart. The second verse from Roc Marci is BRUTAL.

Posted by Across Your Face at 5:53 PM No comments: 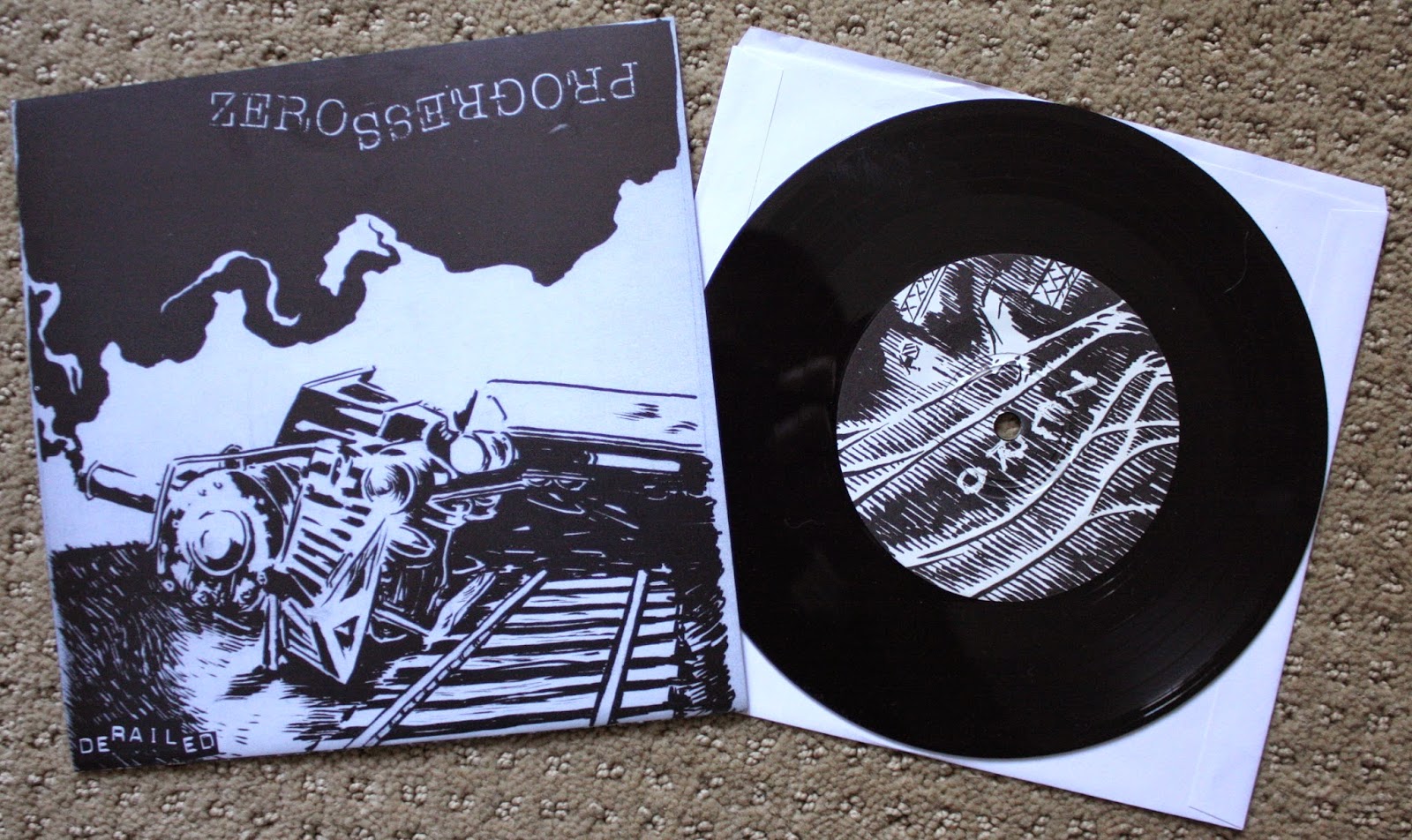 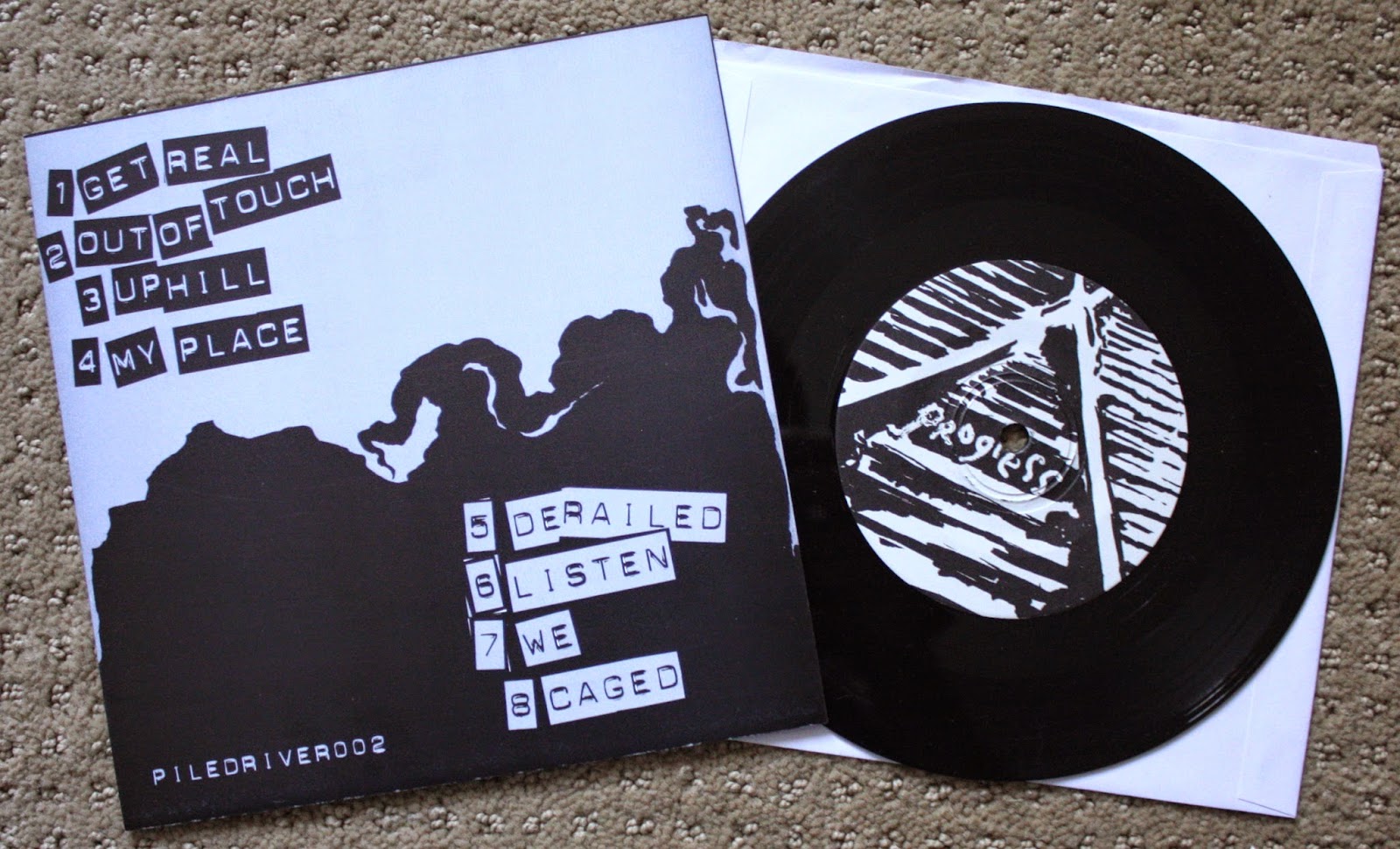 Here's the debut 7" from East Bay punk rock freaks Zero Progress. I have been absolutely loving this band ever since I saw them live last summer. I don't enjoy this release as much as "The Void" EP, but this release is still fantastic. To clarify, the Void EP has become one of my favorite releases of the last few months, getting constant rotation on the Ipod. The Void EP has a more a frantic, urgent feel to it and rougher vocals. This release has a bit more refined old school feel to it with a touch of snottiness reminding me of 80's LAHC like Adolescents and Black Flag while the Void EP is purely Antidote and the Abused inspired.  Either way this is an excellent release, and this a band that you should not be sleeping on at all if you still are. 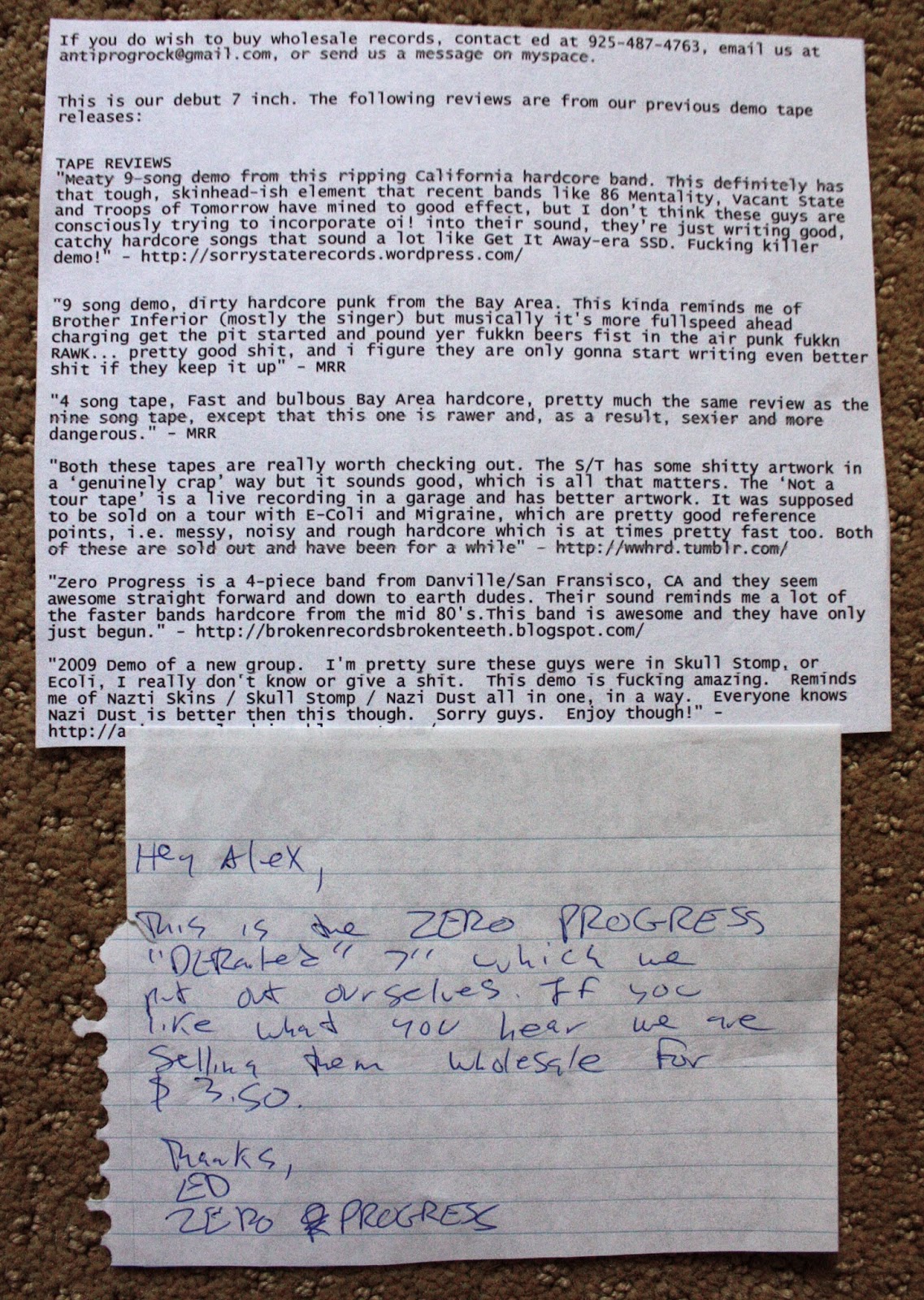 When I ordered it from Grave Mistake, this little note from the band to Alex at Grave Mistake fell out. Kind of cool I guess, I'll take it.

I talked about in my first post on this band how hilarious their singer is talking shit to the crowd. Apparently they pulled up to the Burnt Ramen in a fucking limo and were talking all kinds of shit to get the crowd angry at their record release. The singer refers to himself only as "The Champ". They opened up their set at this show saying shit like "I wear the finest clothes, I show up to the show in a limousine, I got pretty girls, I got money, and the best band in the world. What do you got?!" I love it!!!

Posted by Across Your Face at 8:22 AM No comments: 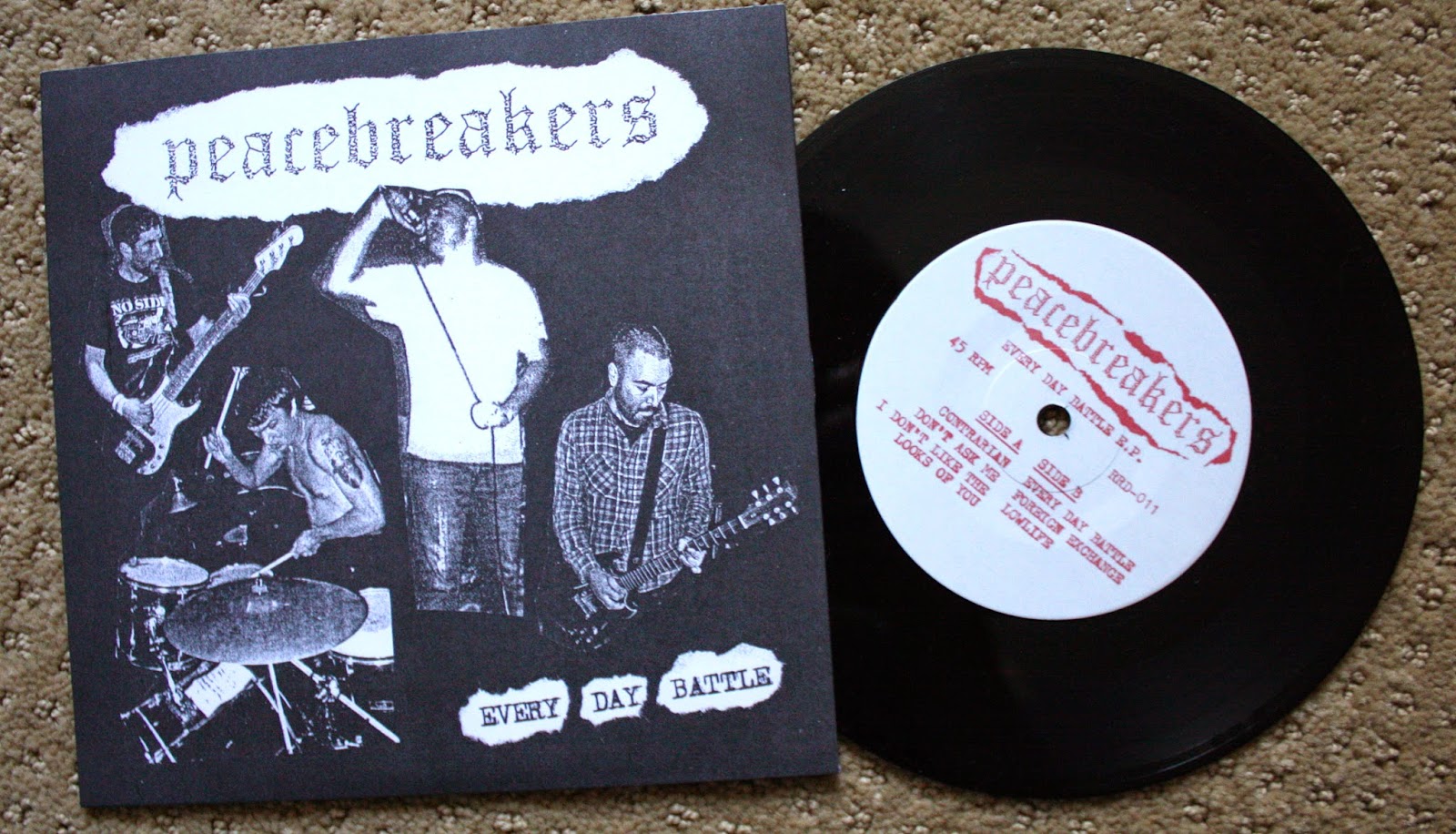 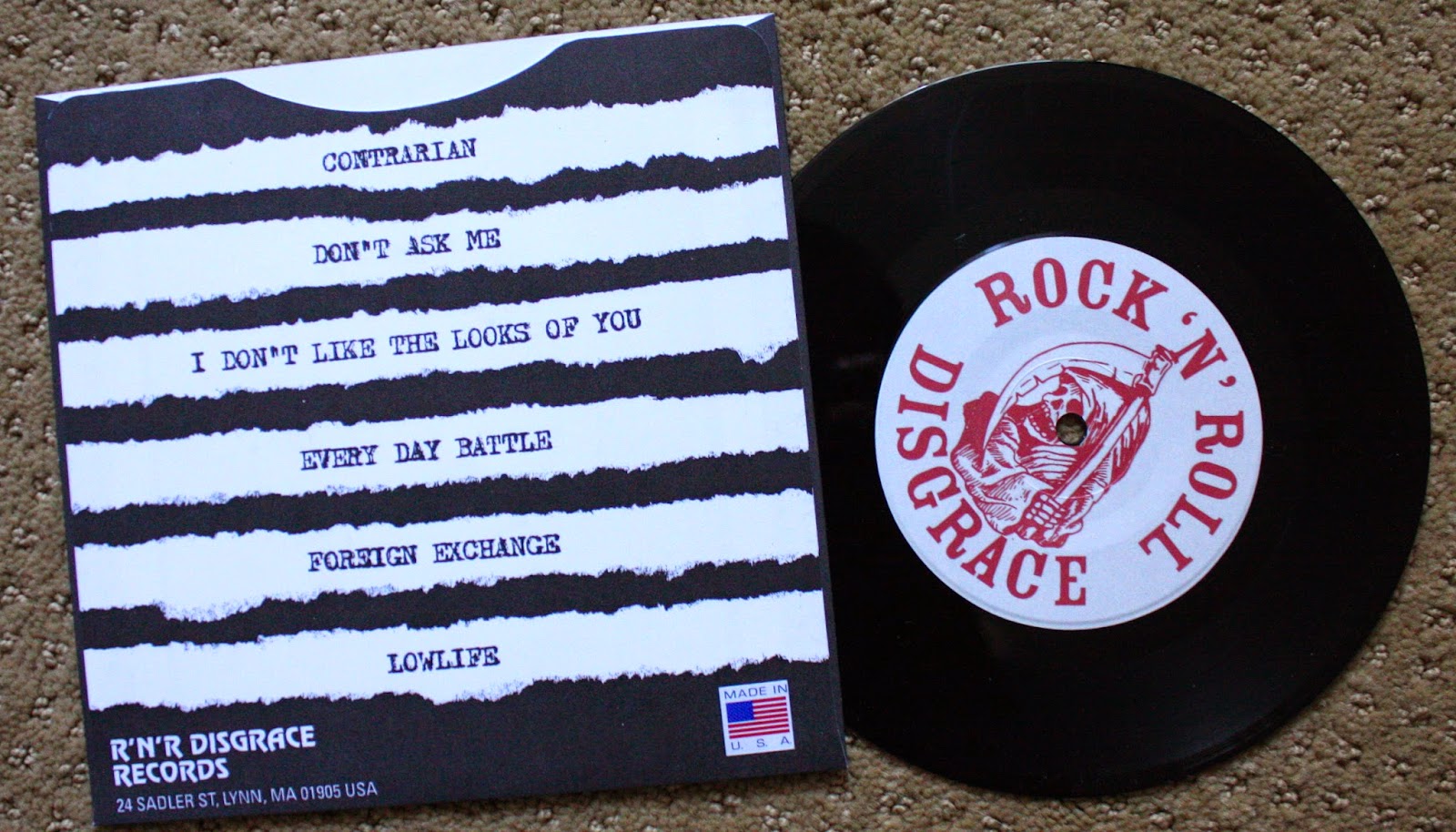 Here is a band that has been getting a ton of attention lately. This Boston band sounds like much of the late great knuckle dragger hardcore and you know I got no complaints about that. Their members play/have played in bands like Boston Stranger, Waste Management, Social Circkle, Blank Stare, Scapegoat and more. This is a fantastic 7" and was really difficult for me to track down. I believe it was pressed out of /500 on black. 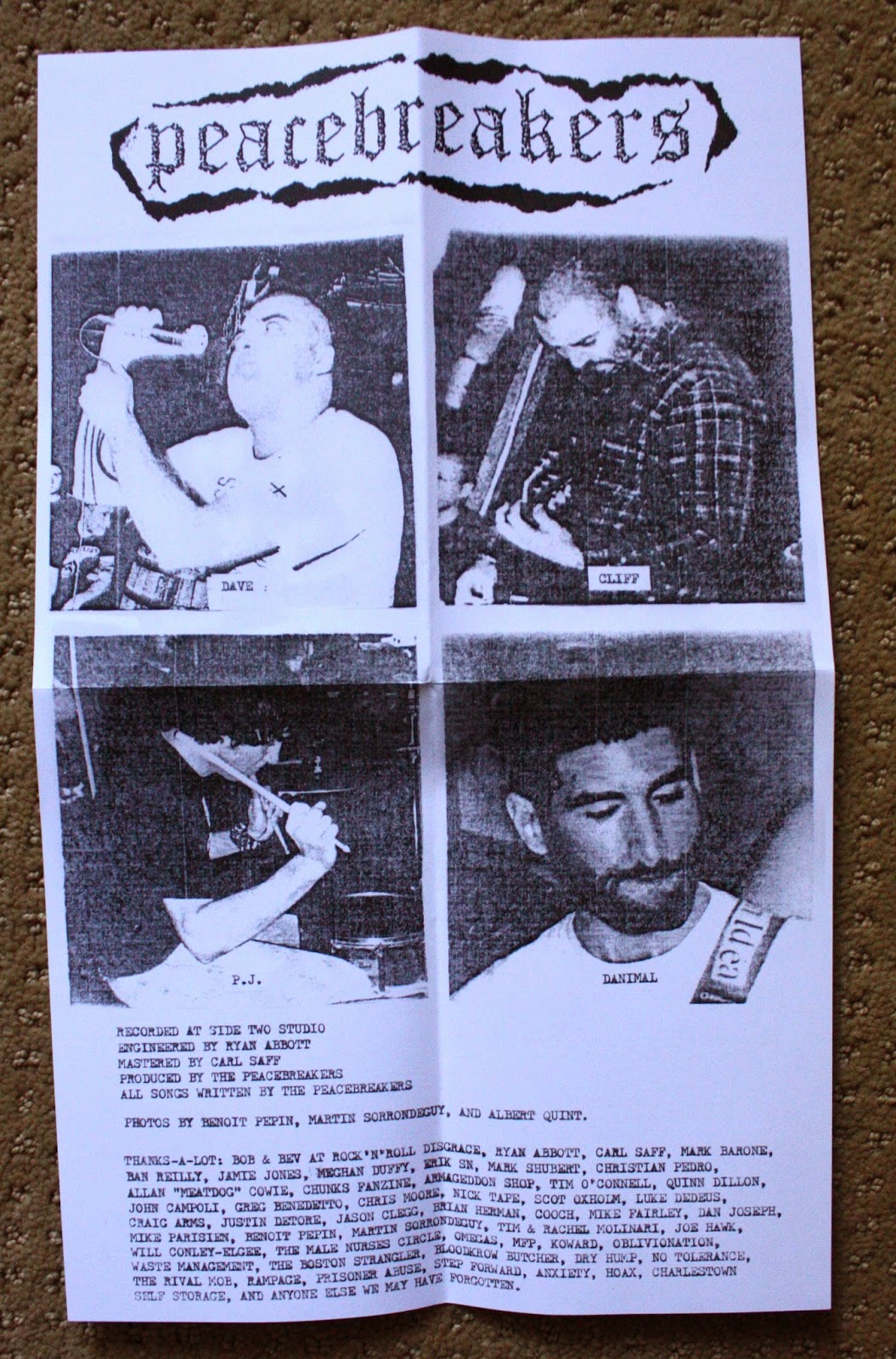 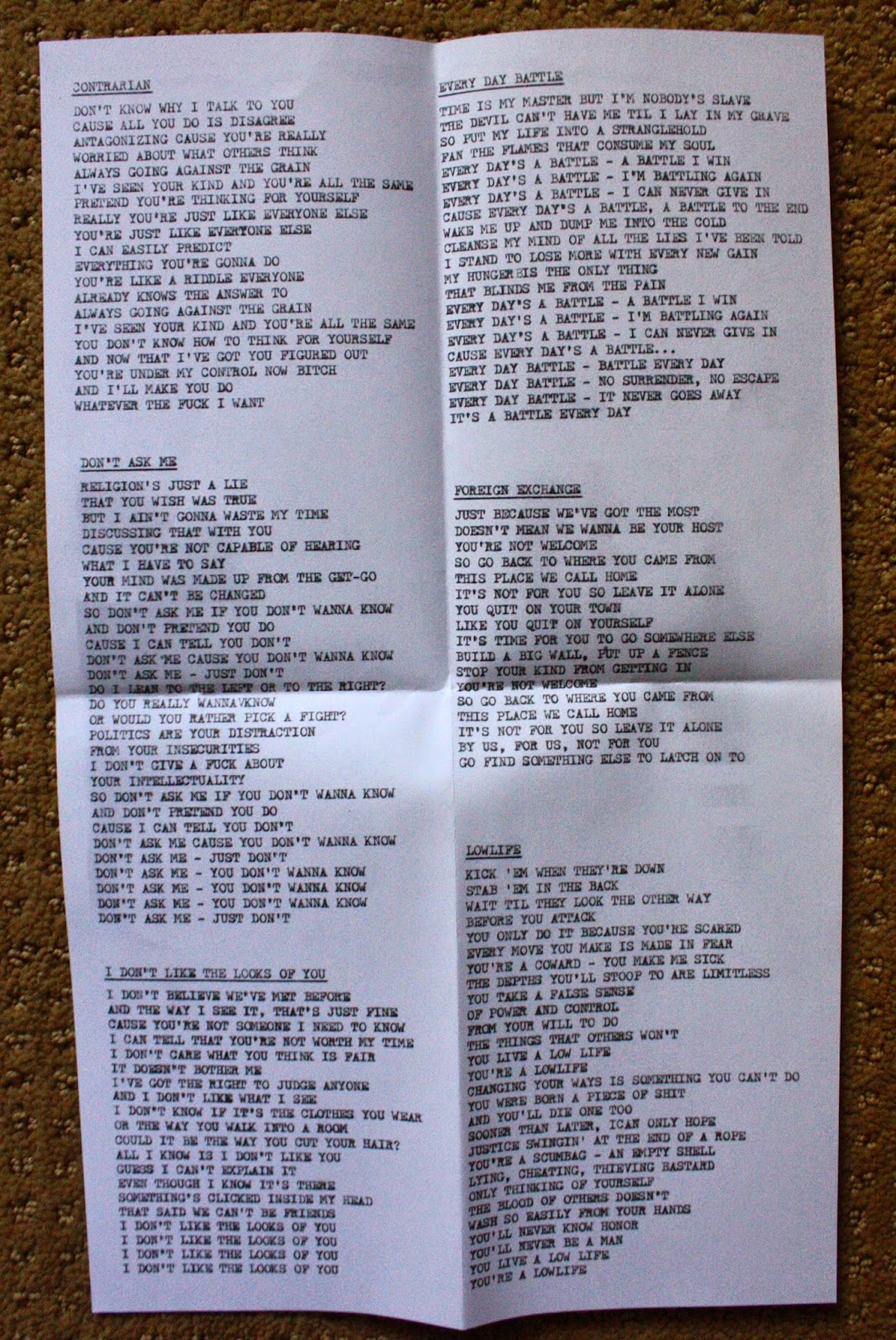 Part of the controversy surrounding this band revolves around a song called "Foreign Exchange" which does sound like an anti-immigration song. However, I would be really surprised if that is what they meant by it. When I hear it, I hear it more so about pieces of shit trying to get in their scene, and they're telling them to get the fuck out. I don't know if there have been any "official" statements made yet but it's amazing how quick people can jump to conclusions. Maybe this controversy helped this become one of the most sought after pieces of vinyl this year? Either way, this release rules and I actually prefer this band to Boston Strangler and the rest of the bands mentioned above. 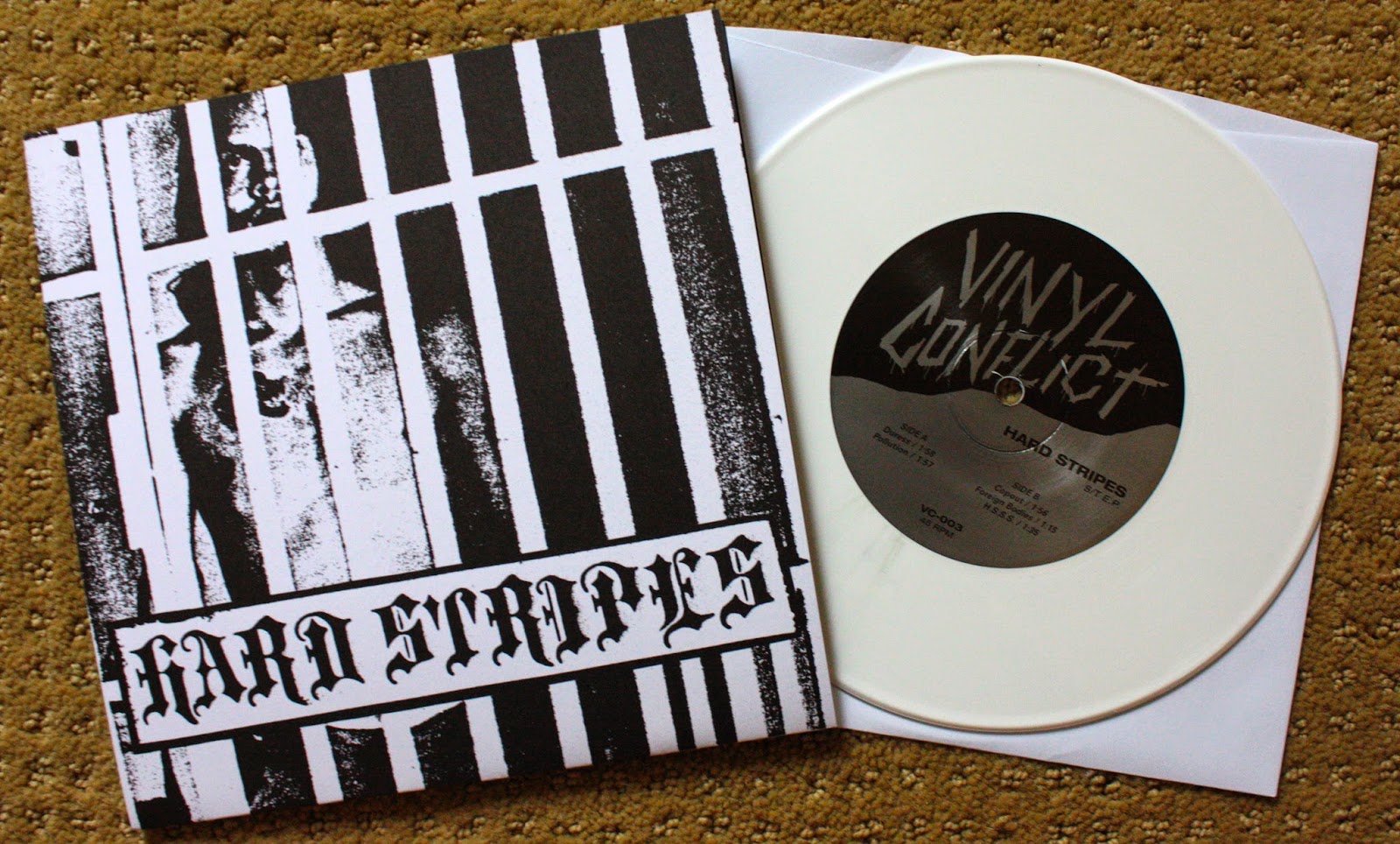 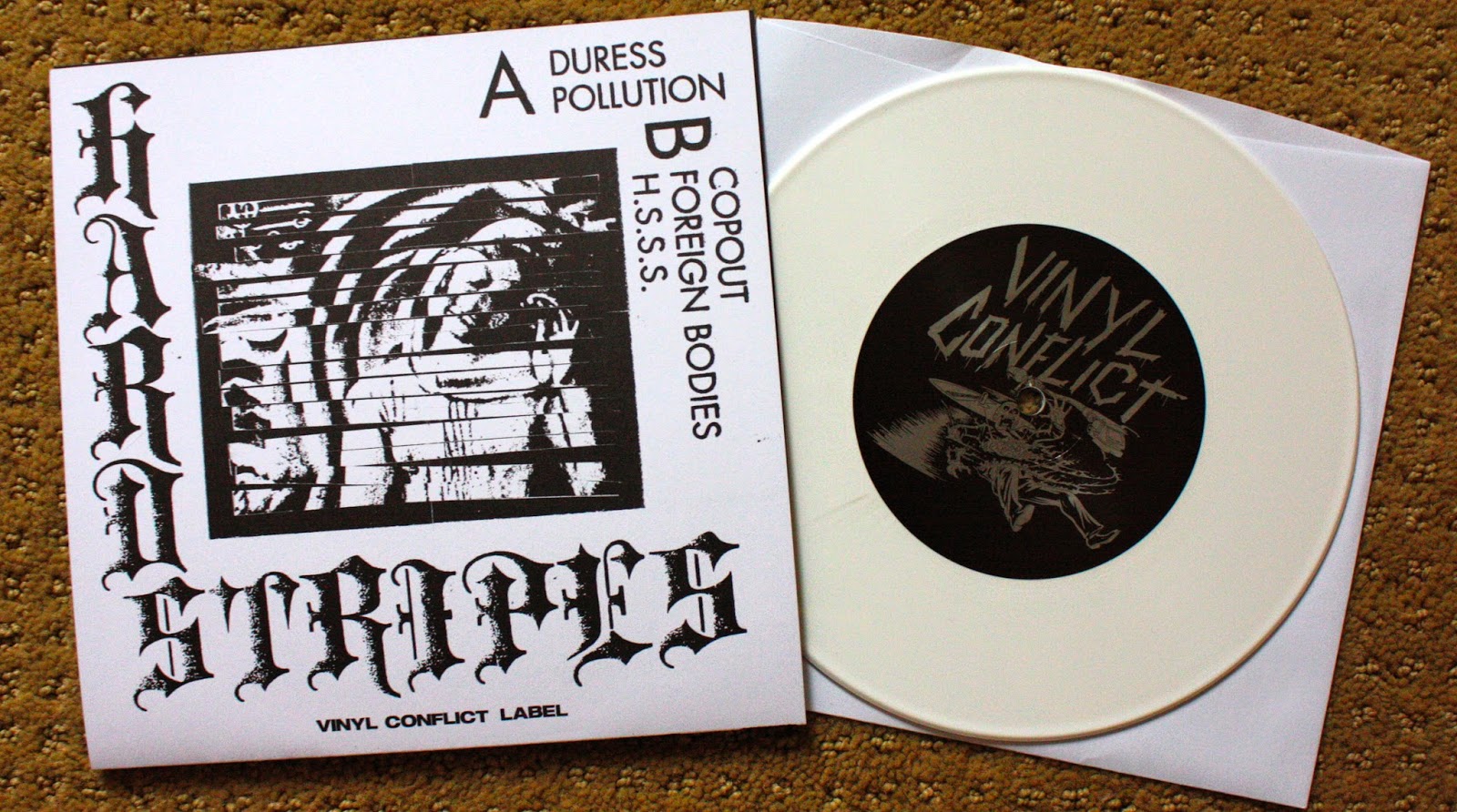 One of the most brutal releases of recent years is this Hard Stripes demo. This thing absolutely rules. This is such an amazing period in hardcore right now, with all this excellent knuckle dragging Neanderthal hardcore/Oi! going on, I'm in heaven. Amazingly, the limited color of this is still available at the Grave Mistake webstore. I think it's either out of /100 or /200, either way I can not believe it's available and if you don't have a copy of this then you are a damned fool. This was put out by Richmond VA's Vinyl Conflict, and they have been on fire with some of their recent releases. At this point, I will basically purchase anything and everything that Vinyl Conflict releases.

Posted by Across Your Face at 9:37 AM No comments:

Pay the Price for FREEDOM 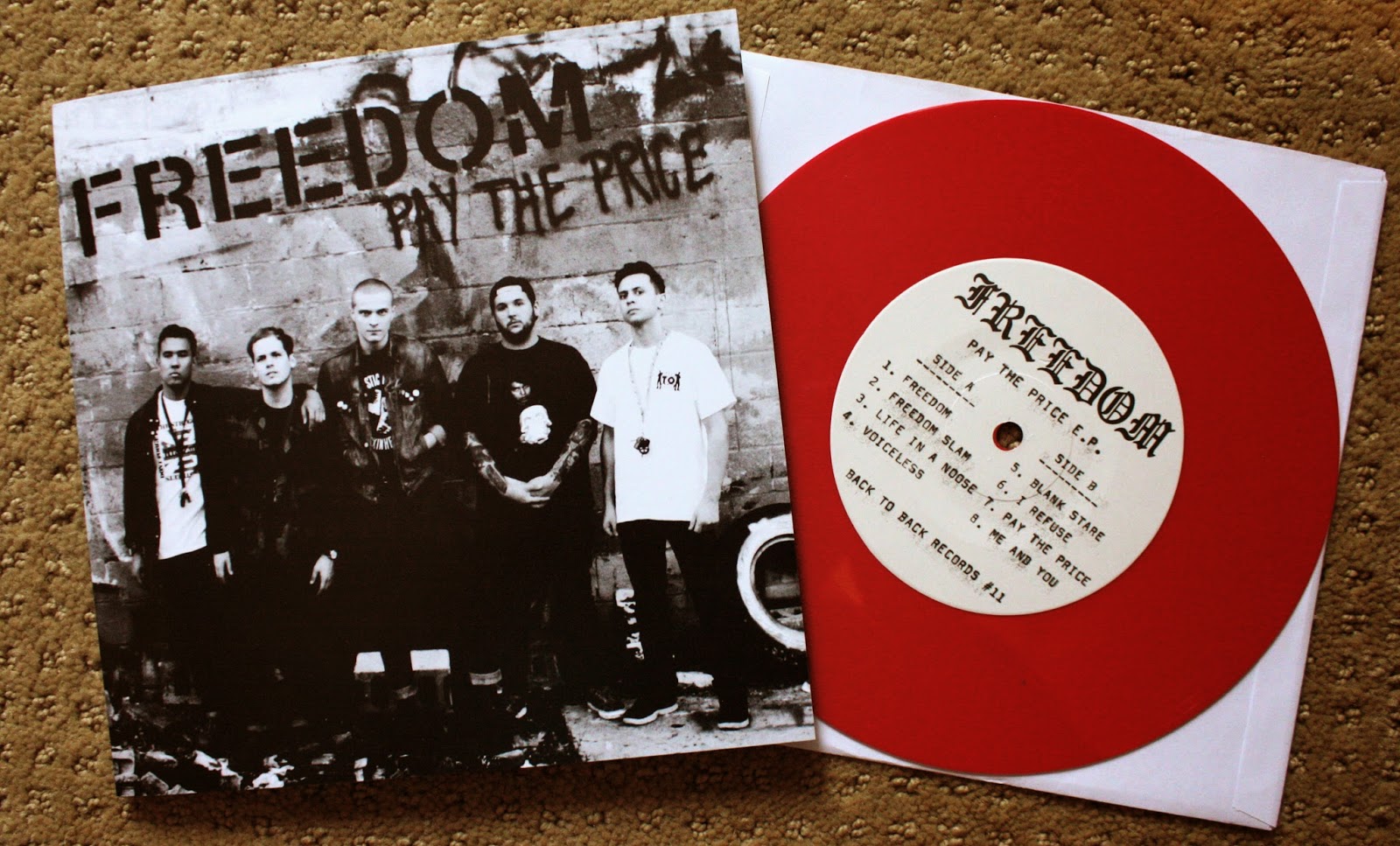 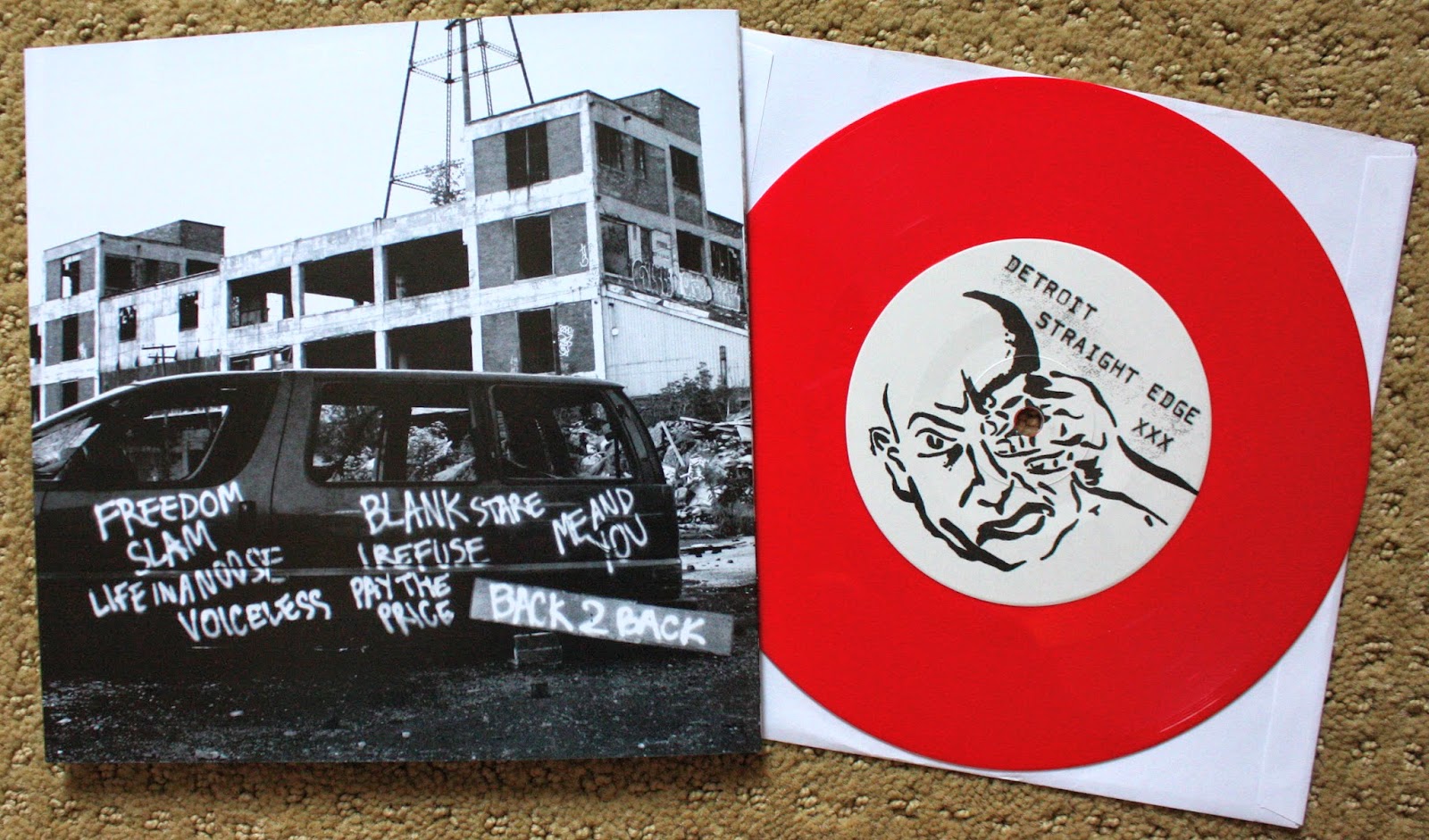 Without a doubt, this will be one of my favorite records of the year. Detroit's FREEDOM is hard hitting knuckle dragger hardcore mixed with Oi! style vocals. They sound almost exactly like 86 Mentality, one of my favorite bands ever. I love this seven inch and can't stop listening to it! I love the lay out, at first I thought the cover art was just done with photoshop but then I realized it's all really spray painted. This is on red out of /100 (the most limited color). 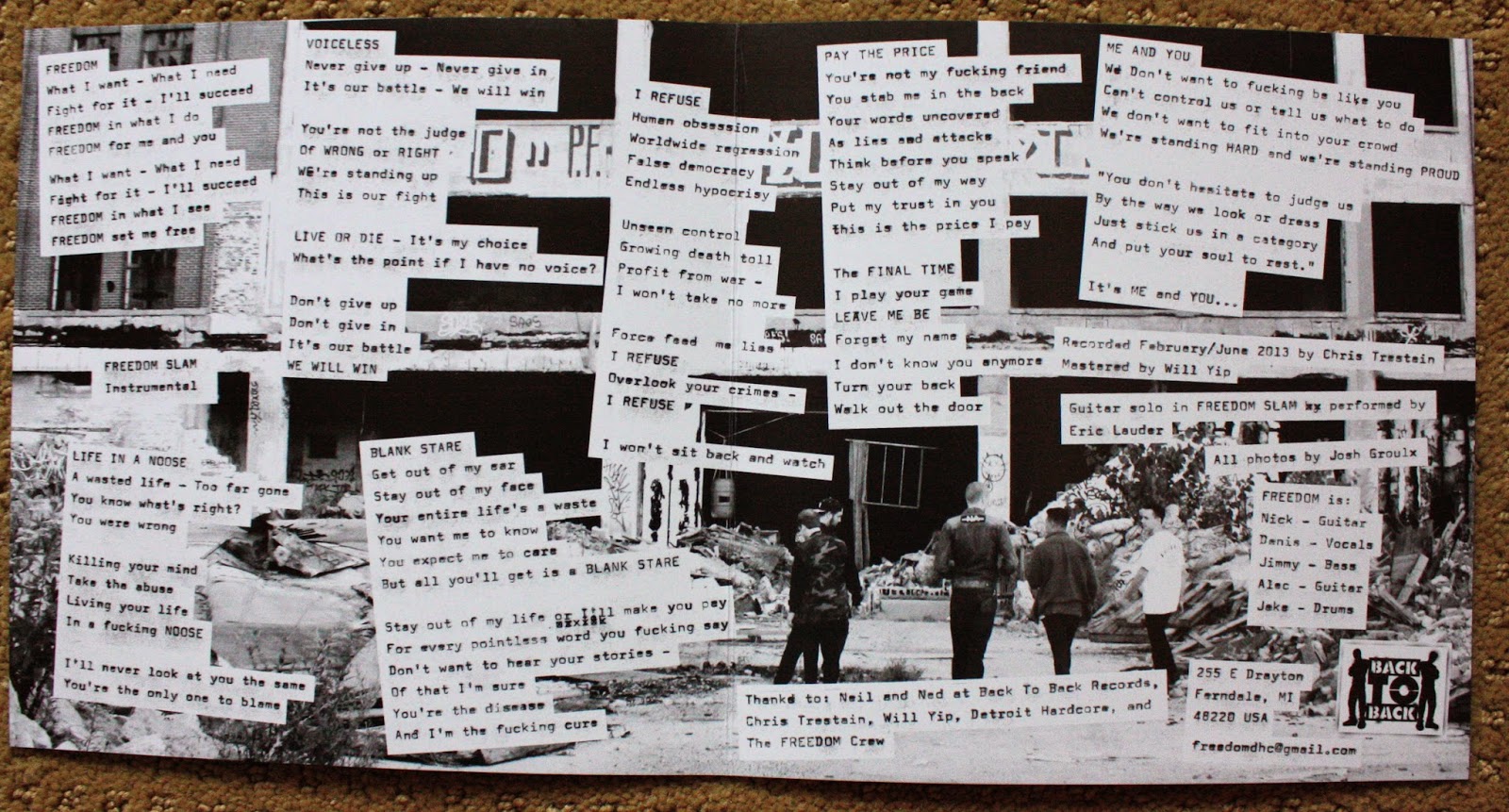 So awesome, the band walking around Detroit that looks as if a bomb went off there. I like how they put the lyrics around the band. Everything on this is top notch. I can't recommend this release enough, and they still have some on white out of /150 left. Excellent job again Back to Back.

Email ThisBlogThis!Share to TwitterShare to FacebookShare to Pinterest
Labels: Back to Back, Freedom, Hardcore
Newer Posts Older Posts Home
Subscribe to: Posts (Atom)