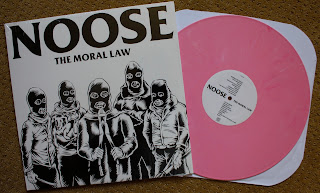 Over the last year, I have grown a huge soft spot for Noose. Militant Vegan Straight Edge and hard as nails. Why do opposites attract? These guys would probably hate me if they met me, because I will fuck up some meat and some alcohol. However, there are some things that we can agree on. I absolutely LOVE the lyrics to "Indefinite Detention". Myself and Noose can both agree on some things... This pink copy was the most limited and the proceeds went to some sort of charity. The pink looks great and is out of /150. 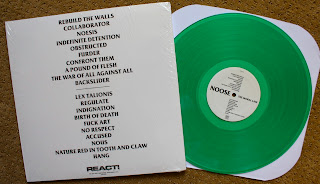 Green was the next most limited color out of /350, and not looking to shabby either. Great color scheme React. There was also a black press out of /500, but I'm assuming that React has a mystery press (as they always do) that they gave to the band. Time will tell what that is. 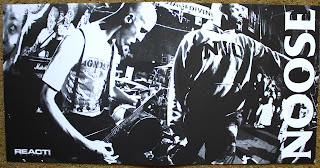 Rotting Out - The Wrong Way 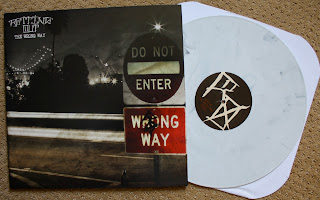 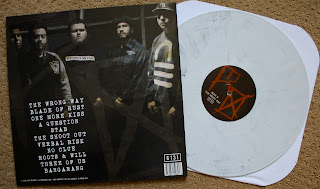 Here is Rotting Out's latest release "The Wrong Way". I knew the hype would be pretty big around it considering Rotting Out has officially blown the fuck up, and with good reason. I got on there about a half hour after the pre orders went up since I was busy at work, and the most limited version of gray/black out of /100 was out. I ended up getting the white/black copy pictured above out of /400. Pretty bummed, I was hoping to get something a little more limited. The light blue/green copy of /1000 sounds like it may be the coolest press out of all of them, and I'm considering getting a copy.

As for the record itself, it is really outstanding. I actually prefer it over "Street Prowl". I feel like Rotting Out really found themselves on this release and honed their style to perfection. They knocked it out of the park in other words. You already know this is going to be on a whole bunch of top 10 lists for the year. 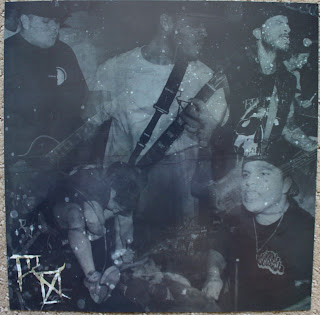 The record came with one sheet with a band pic and lyrics on the back. Not quite the packaging treatment that Street Prowl got, but that's okay. If you haven't picked a copy of this up yet then quit messing around and get on it. 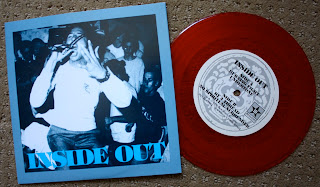 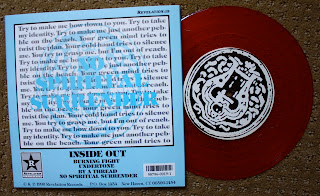 Sometimes all of the Rev represses can get pretty over whelming, but I was real excited when I saw that this was finally getting a repress. Some have questioned the color of red vinyl, but blue and white (the most logical colors perhaps) have already been used. This thing is out of /550 and looking sharp on red.  I'm already predicting another press on clear, you heard it here first. Recordo-damus, what's up!

I've always loved this EP and I was stoked to finally get it on vinyl. I think this is super slept on compared to alot of the stuff coming out back then, but a classic in it's own right. Sometimes I wonder if the Rage Against the Machine connection hurt this bands legacy or helped them. Or was it that they were on that cusp of late eighties and the dark years of the early 90s? 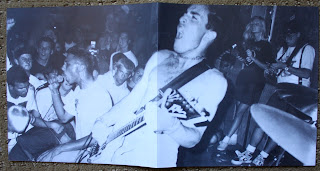 More importantly what's up with the blonde chick taking pictures?Was that someone in the bands girlfriend? Apparently the hottest girl at hardcore shows back then... shit!

Email ThisBlogThis!Share to TwitterShare to FacebookShare to Pinterest
Labels: Hardcore, Inside Out, Revelation 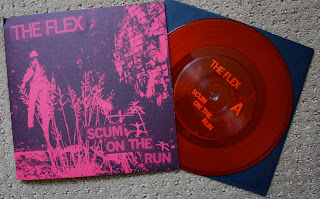 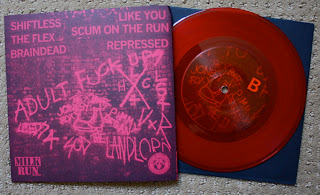 I have been very busy lately and it's been a challenge keeping up with this blog. This is a great record that I was stoked on when I first got it. I bought it on a whim because of the description and the relation to Violent Reaction. I thought I would be a trend setter, and I slowly watched every single blog in the world post this record before I got a chance to. Haha, I guess great minds think alike. As everyone else has noted, this release pressed on red vinyl out of /600 is all around red and I think it looks great. A fantastic EP by this English band that sounds alot more like 80's USHC than you'd think.

Time for some Action 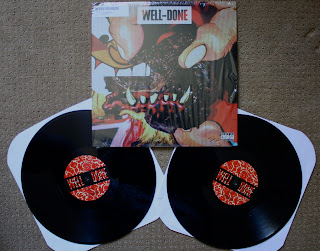 Action Bronson is without a doubt one of the best "new" rappers to come out in the last few years. With a voice and delivery strikingly similar to Ghost Face Killah, what could go wrong? Action Bronson is a professional NYC chef turned rapper and alot of his lyrics reflect that. This is the first pressing of his album with Statik Selektah, "Well-Done". This may be remembered as the apex of his career, but time will tell. This release is an instant classic. They did a second pressing on red vinyl, which I failed to buy for some stupid reason. Maybe because hip hop LP's usually sell for $20-25 bucks (much more than punk/hardcore), so I have to be a bit more selective with what I buy. This dude is blowing the fuck up right now so keep an eye on him. 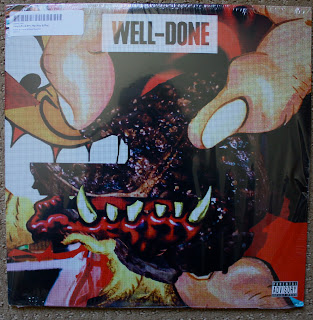 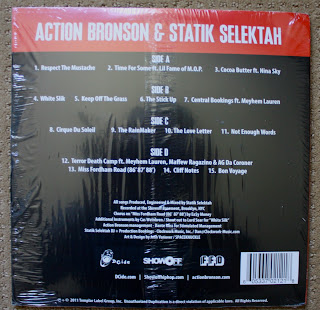 Statik Selektah as always comes through with amazing beats for this. Mixing one of the best up and coming rappers and one of the best producers in hip hop, this thing will be considered one of the best hip hop releases of the 2010's when it is all said and done. Check out one of the singles from this release, "Not Enough Words" below: 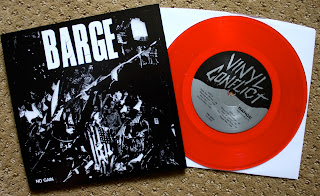 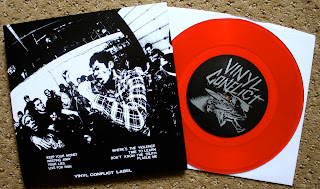 Here is a rager of a 7" from Richmond, VA's BARGE. I don't know if you would classify this as power violence or just hardcore, but all the songs are about a minute long with a pretty similar formula. Fast blast beat parts and then sludgy,  hard as fuck break down parts. At first listen, I hated this record. But now that I have given it a few more listens, I could listen to this thing all day just for the slow heavy parts, which sound brilliant. This is the limited version out of /100 which was released on Vinyl Conflict Records, which I think has some sort of affiliation to Grave Mistake Records. The limited copies are still available and they look great on red vinyl. This is a record that you'd more likely see on Utopia Banished or Skull Fucked (which have both reviewed this record) than here. I may not know jack shit about this kind of style, but Barge plays just enough slow parts to keep me interested. These guys have drawn comparisons to Coke Bust, Infest and Mind Eraser. I can dig it. 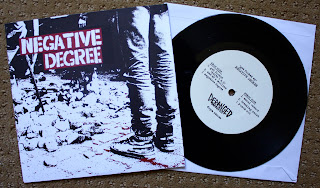 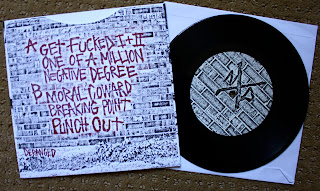 I bought this on a whim based on the great artwork, band name, and the fact that Deranged put it out. This has been a huge pleasant surprise for me. Stripped down USHC out of Colorado, this thing freaking rips. Something about this is a huge fresh breath of air for me, maybe it's the fact that the guitar has almost zero distortion and it's mostly mid tempo that makes it almost sound a bit Oi-ish? I strongly suggest checking this out, this record is a real sleeper for 2013. I'm not sure if this ever came on colored vinyl, but I do believe that this is the first pressing and my copy is on black.

You can preview this release at the Deranged bandcamp (my favorite is "moral coward", but every song rips!). I am bummed that this didn't come with a digital download card though because this thing has proven difficult for me to find via google-fu. If anyone has a lead on a free download let me know.

Give Me Liberty, or Give Me Death 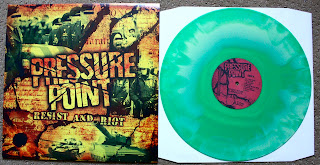 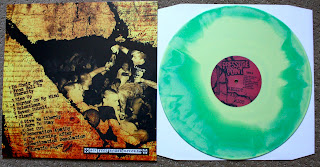 Here is the "Resist and Riot" LP by Sacramento Oi! legends Pressure Point. This may be their latest release (don't quote me on that!) and it came out in 2007. Their early releases like "Youth on the Street", "Life's Blood" and "Cross to Bear" are widely considered to be some of the best American Oi! releases ever, and it took me a while to really get into this release. This is by far Pressure Point's most experimental musically and lyrically of any of their other stuff.

For a long time, I could care less about politics. But over the past few years, I have been waking up to alot of things and alot of these lyrics couldn't be any more dead on about some of the shit that is going on today. This may be my favorite Pressure Point release now, as for the last few months I've been listening to it non stop. I am posting this close to 4th of July because this is some truly patriotic American Oi! Not "ignorant patriotic" like alot of Oi, but these lyrics are much more critical of the government and encouraging people to find out what the fuck is going on. They're talking about the government spying on you and drones and shit flying around all the way back in '07, quite prophetic if you ask me. Give me liberty or give me death, motherfucker. Out of /103 on green and yellow swirl vinyl. 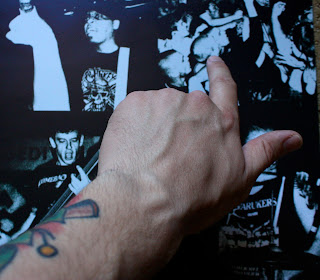 "Give me Liberty" by Pressure Point is the perfect song for 4th of July...

But "Rise Up" is surely my favorite track on this LP.