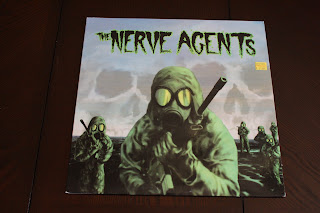 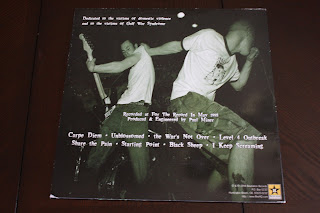 Here is a pretty generic copy of the Nerve Agents' S/T Ep on Revelation on black. Nerve Agents were one of my favorite bands growing up. I was lucky enough to see them live four times. Once at the Gilman (Berkeley), once at Slims (San Francisco) and twice at the Pound (San Francisco). I am going to give a few little stories of my experiences seeing them. When I went to see them at Slims, they were playing with All Bets Off. (I found a flyer of the show actually and am posting it below. For some reason I don't remember Powerhouse actually playing that night though.) Across the street from Slims there was a little liquor store that me and my friends were trying to shoulder tap at to get some beer before the show. I was a pretty inexperienced kid in the scene at that point, still being about 13 and I was wearing a "Condemned 84" shirt. Apparently at the time word had got out that Condemned 84 was racist or something, and I had no idea about it. As we were standing outside the store, some older guys were giving me a hard time about it but I just said I didn't know what they were talking about. After the show we went to walk to our car which was parked at the parking garage that is now Costco, a few blocks away from the venue. Once we got to the car some of them spotted us and beat me up because of the shirt I was wearing. I went home to my mom with a busted lip and black eye, and at the time I told her that I was just "messing around" boxing with one of my friends. She never forgave my friend for that! Even though it was a lie, I told her the real story years later, and she still to this day thinks that my friend (who was about 4 years older than me at the time) really beat me up that day!!! Sorry, dude! 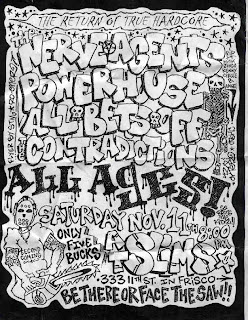 So I seen them twice at the Pound in SF as well. The first time they were opening for either the Unseen or US Bombs. Or maybe both. I really can't remember, and I can't find any flyers online or anything to corroborate that. After all these years and so many different shows, they all kind of blend together. But the night I remember sharply as one of the funnest shows I've EVER been to was their last show they ever played which was at the Pound in December of 2001. They played with Lars and the Bastards, and I think Intrepid AAF opened. So the day started around noon. Me and my friends used to have a liquor store that would sell beer to us in San Jose that was called the Mini mart. We were some of their best customers, going there all the time to get 40s. We would just have to wait outside until it was empty, and then the owner would sell to us. The thought of a bunch of 14 year old kids buying crate fulls of steel reserve 40 ouncers is pretty hilarious when I look back on it. Then we would go drink them all day at this spot in the woods across the street we called the "log spot". So we would have warm ass 211 fortys for that night of the show. The Pound in SF was in a really industrial shitty area of SF and way out in the middle of nowhere really. There was just some fields and a bunch of semi trucks parked all over the place by the venue. I remember that night was rainy and cold as fuck, and sitting out there in some field drinking warm ass 211 fortys before the show. They were really incredible that night, kids were going fucking berzerk hanging from the rafters and shit. I've really never seen anything like it since. It's so sad that they are not around anymore, they were a great band. Below I found some footage of them playing at the Pound in 2001. I may have been at that show, but I know the footage below isn't from their last show and I'm sure they played there a bunch of times. Anyways, enjoy the footage!

Posted by Across Your Face at 2:14 PM