Way too much BACKTRACK 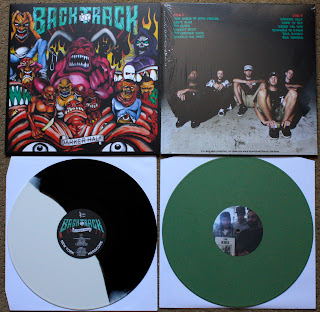 Since I'll be seeing Cold World and Backtrack tonight in Oakland, I wanted to post my copies of Backtrack's "Darker Half". I bought the black and white copy when I saw them with Trapped Under Ice last year. At the time I had never listened to them, but I was so blown away that I had to pick up the record and some merch. At the table I remember they had all four vinyl pressings, but I opted for the most common one on black and white vinyl (out of 1000) because I thought it looked so great and the fact that the album is called "Darker half". Then a few months ago I saw that Reaper had posted the pre-order green (out of 300) which was the most limited color and I had to scoop that one up as well. I'll probably pick up the clear and yellow copies if I can get them on the cheap on ebay or something, but I don't really feel the need to pay full price for them. 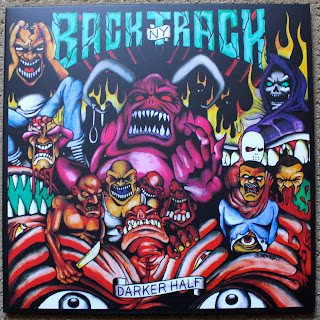 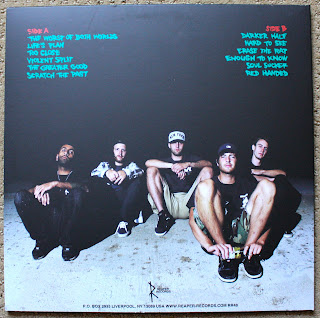 The artwork and layout is incredible. Another prime example of why Spoiler art is just untouchable. It seems pretty obvious that this is inspired by the Agnostic Front "Cause for Alarm" album art, not just because of the obvious devil connection and other similarities, but there's a dude getting choked out for christs sake! 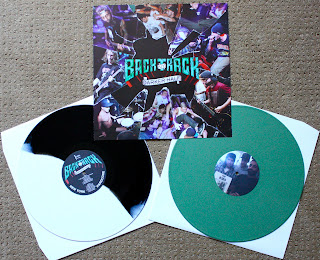 Now onto the record itself... This thing is an absolute banger. I sincerely think this thing may be remembered as a classic from this era in another ten or fifteen years. This is one of those albums that I loved from the first listen and I can listen to every track. If you haven't picked one of these up, I would definitely do so immediately! 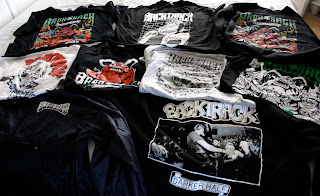 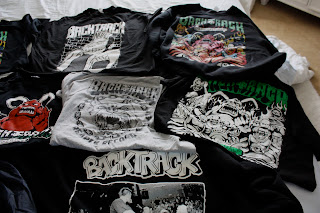 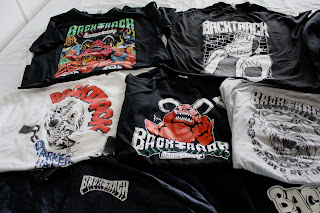 I also have slowly amassed a silly amount of Backtrack merch. I have never been that big of a merch guy. Do I have a shit load of band shirts? Hell yeah, I mean I've been going to shows on a regular basis for well over a decade so it just happens, but I've come to the point where I have enough damn shirts and hoodies that I rarely feel the need to buy something unless I absolutely love the design. It all started at that first Backtrack show, I got a Darker Half crew neck and the white "face" shirt with the vinyl. A few months after that I was ordering some stuff from Reaper and decided I wanted the Darker Half logo on a T shirt and also threw in the Spoiler devil and barking dog shirts while I was at it. Then I seen them again recently in Santa Cruz and bought the black Ape shirt and the black Darker half alternate "green" shirt. Then a few weeks ago, I see an update saying they have left over tour stuff for sale, so I picked up the windbreaker and Darker half hoodie (both in the front). Does the insanity ever end?? I'm going to have to try really hard to not buy any more Backtrack stuff tonight. So far the tally is (1) crew neck sweatshirt (1) hoodie (1) windbreaker and (6) shirts. That is by far the most merch I have of any band, and I feel like a huge dork for having so much. It just kind of happened and built up on me slowly... What can I say, there artwork and designs are just too awesome to deny!
Posted by Across Your Face at 4:32 PM