Entering the TO ZONE 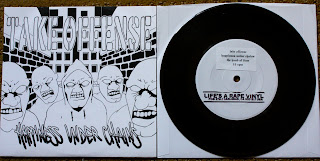 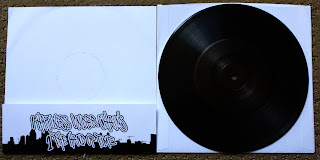 Before I go see Take Offense and Maya Over Eyes play in San Jose tonight, I figured I would put up my copy of Take Offense's "Happiness Under Chains" on Life's a Rape Records. This record is supposedly OOP, however I did a little bit of digging and saw that Sorry State has some copies left, for those of you that still want to get one. This has two early recordings from "Tables Will Turn" LP. I haven't done much research on this, but from what I've seen I think this may have been Take Offense's first vinyl they put out? I know they have another 7" called "Peace in Death" that is still available, and I know they had a demo called "Negative Outlook" but I don't think that ever made it to wax. The fact that Peace in Death is not OOP yet, leads me to believe that this 7" came first. I don't really know and I haven't been able to find an official discography for the band, unless its on their facebook or twitter or something but I don't have accounts for either of those sites.

(Note: Included a download link I found for "Negative Outlook" demo. I did not upload these songs. I am only posting it because the songs are not available for purchase anywhere. If you want me to remove the link then just let me know.)

Posted by Across Your Face at 1:15 PM