This is for my weather people... 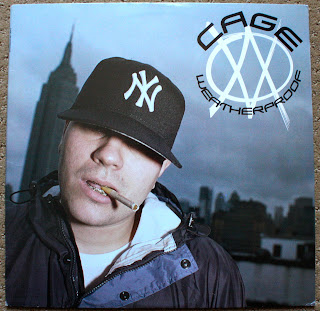 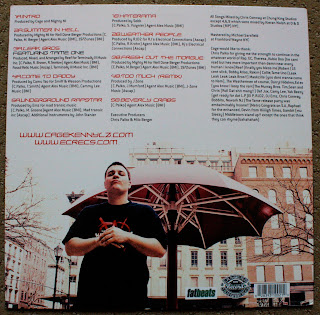 Here's the Cage Kennylz classic "Weatherproof". This 2003 release was, in my opinion, his last good solo work. This is definitely considered a classic as far as New York hip hop goes, and this vinyl is pretty rare now. I rarely see them ever pop up. This is not on the same level as Cage's debut LP "Movies for the Blind", but "Weatherproof" is still the shit. It has the first "Leak bros" track with Tame One that ended up leading to the idea of the Leak Bros concept album (both of those I'll post in time). You straight edge kids might be hating on this. Cage was heavily influenced by PCP and his rhymes reflect that. The cover is of him with a "dipped" cigarette (dipped in embalming fluid) which is PCP, "wet" or "leak" (hence Leak Bros). After 2004 Cage got off drugs and got all emo and basically sucked after that. Kind of sucks that he needed PCP to make dope music, but yeah I don't fuck with anything by this dude after 2004.

Here is one of my favorite tracks from this release, the original "Leak Bros" track. I was lucky enough to see a show in 2003 with Cage, Tame One and Camu Tao (RIP) all on the same bill in San Francisco. I will never forget that shit, they played all the classics - including this track.

Posted by Across Your Face at 4:20 PM