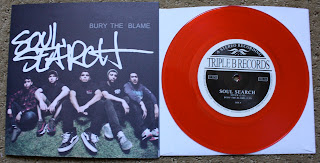 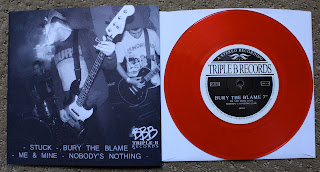 Here's the Bury the Blame 7" that recently came out on Triple B. Good release, pretty decent layout. Nothing ground breaking or original about these recordings, but sometimes thats a good thing. This came out on clear red, clear green and black, with 300 on red and 100 on green. There was also a United Blood sleeve (/50) and Tour pressing sleeve (/100). I don't think they ever had green available on their site unless maybe in a pre order, but after pre ordering the last Stick Together 7" I really don't think pre order matters at all, you're not gonna get that color unless you catch one of the bands early shows when they start their tour. Usually by the time East Coast bands come out to the West Coast they are long gone. However, there are actually a couple copies left on red if you hurry up! 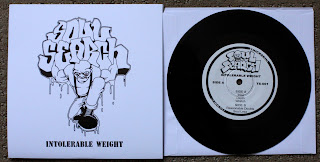 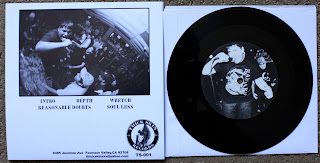 Here's a copy of Intolerable Weight, which I believe was their first 7". This also came on Gold vinyl, but besides that I'm not too sure about what other different variations there were. I love this cover art! As if you didn't realize by now, anything with Spoiler art is kind of a big deal to me. My only gripe is why did they not have him incorporate the "Intolerable Weight" text into the design? Having it just in a regular ass text underneath it looks like they added it real quick later on Microsoft Word. I mean what the hell, if you're having Spoiler do a sick ass cover for you why not go all out? Maybe it was his call? Either way it is a small gripe for such an awesome cover.
Posted by Across Your Face at 12:22 PM