No beer with your steak on this one... 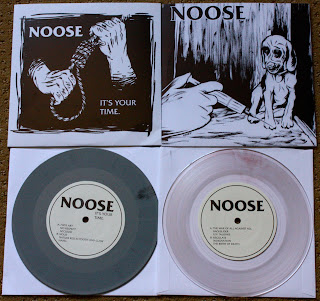 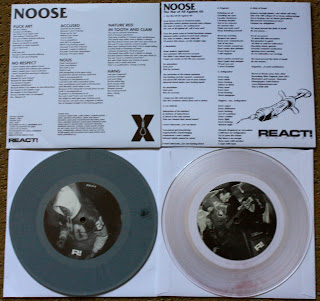 Some recent React! pick ups, here is NOOSE, a vegan straight edge band from Chicago. I cannot lie, this is one of those records that I went off with strictly because of the album art. I figured sick album art, they are on React!, it is at least worthy to add to my collection for those two reasons alone. I was not very happy to say the least to see the "It's Your Time" jacket all bent to hell on the bottom corner, but fuck man, I am really glad I picked these up! I'll probably have to add some other colors later on. Really fast, angry and aggressive as all hell. Both came with a similar layout, plain white back with the lyrics. Also each record just has the band name on songs on A side and then a live picture on the back (kind of reminds me of all the recent GIVE records). All the recordings are noisy and distorted as fuck and sound like they were recorded on a shitty 4 track, but it adds to the intensity and rawness. Whatever this band is doing, I hope they keep it all the same for their next releases. Definitely check this out.

Posted by Across Your Face at 1:40 PM