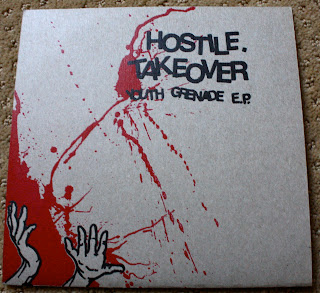 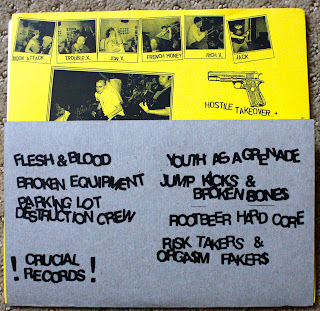 Here is one of my favorite 7"s that I own. San Jose's own (RIP) Hostile Takeover - "Youth Grenade" EP. This band was with members of In Disgust before In Disgust. I think this was one of their only seven inches that had Jon AND Trouble on Vocals, as most of their recordings after just had Trouble. I think I may be wrong, but I believe this was their first seven inch? I love the layout, just plain cardboard with a nice thick screen press coming off of it that you can actually feel with your fingers. Plus a great design with the hands throwing blood up on the wall. But this seven inch has more to it than just the great design, lets have a look... 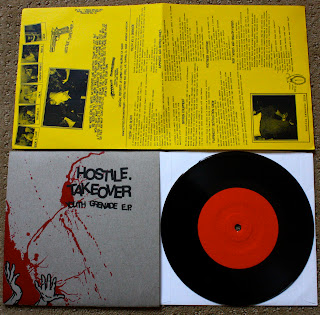 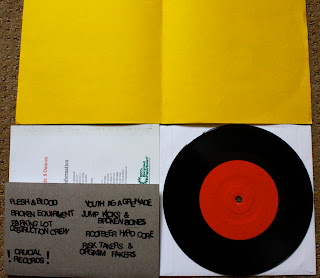 Ok so it looks kind of plane so far, a Xeroxed lyric sheet, plain red labels with no writing, what the hell is so special about that?? Stay with me here, it gets better... 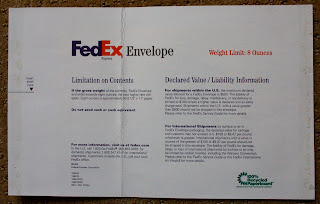 Voila! What the hell, a seven inch made out of a FedEx envelope?! Now THAT is fuckin' DIY and punk as fuck! I have seen handmade stickers out of the USPS mailing stickers, but this really takes the cake. If I remember at the time I think Rich worked at FedEx in downtown San Jose. After so many years the memory fade and it's hard to tell who is who and what is what. It says this came out in 2004, but I seem to remember actually getting my hands on this in 2003 at a show. I may be wrong. Anyways, I have no idea about how many of these were pressed or if there was color vinyl, but there is a copy just like mine on sale at discogs right now for five bucks, I would definitely head over and swoop that one up before its gone forever! Plus they also had an hour long documentary made on them, check out the trailer below, or click here for the link to the entire documentary:

Posted by Across Your Face at 1:35 PM