Late to the GIVE party... 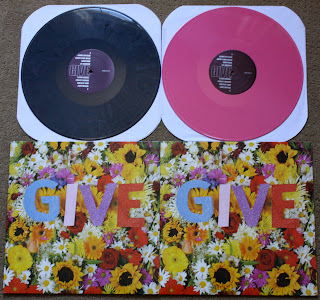 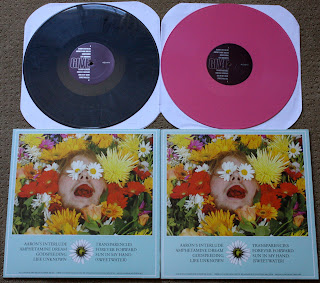 So I have been seeing all the Give vinyl around for a while now, and finally after seeing it on so many other bloggers pages I decided to give them a try. At first I was like, these guys look hella lame, with long hair and flowers everywhere. I figured they were just some emo band, but from the moment I heard their first song I was on a mission to collect all their vinyl. Typically I'm into that more meat head type hardcore, but as I grow older my tastes are starting to vary and expand. No doubt about it, this band is weird. Their lyrics are weird, their music is weird, they look weird, but you know what? They are fuckin good!!!

Here are two copies of their self released full length. About a month ago I ordered a bunch of their stuff off their bigcartel account and picked up the second pressing on Pink vinyl out of 640. The first pressing of 500 on Marble gray was all sold out. Bummer. So the other day when I was record shopping at Thrillhouse Records in San Francisco I was stoked to see a first pressing for only $7! I definitely prefer the pink vinyl, but here's a close up of the two records next to each other: 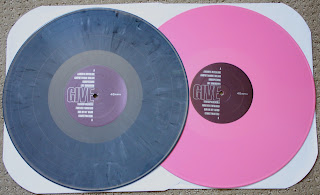 After close inspection there is absolutely no difference between the first and second pressings besides vinyl color, same with the jacket and insert. I hate being late to a party and having to play catch up, but oh well. I now own at least one copy of all Give's releases, although I had to settle for alot of black vinyl since some of the color copies were long gone by the time I decided to make the leap. Good thing I got lucky and found a copy of the first pressing on gray for cheap! Some of their other limited colors might not be so cheap to come by on Ebay! I'll have to keep my eyes pealed, this Give vinyl quest may take a while.

Posted by Across Your Face at 1:13 PM

Email ThisBlogThis!Share to TwitterShare to FacebookShare to Pinterest
Labels: GIVE, Other