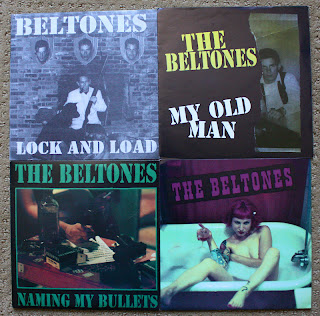 Here it is boys, my 100th post! One that I've certainly been itching to write for some time now. Most of you are probably unfamiliar with the Beltones, who are originally from Florida and then moved to Texas. They were inactive for almost the last ten years until last year when they started playing shows here and there. If I had to only listen to one band on an island for the rest of my life, it would be the Beltones, without a doubt. I am all about lyrics, and I have yet to find any punk, hardcore, whatever band with better lyrics than the Beltones have. They're just fucking untouchable, no one really comes close. Check out the video for "Fuck you Anyway" at the bottom and just read those lyrics! Fucking epic! I started listening to them when I was 13 and have listened to them constantly over these past 12 years. This is the music that has been there to help me through the worst (and best) times of my life and has really kept me going. 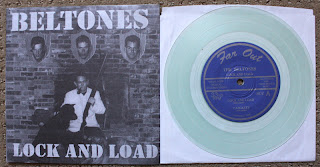 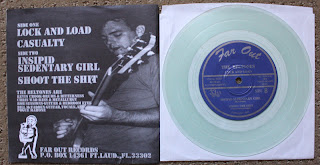 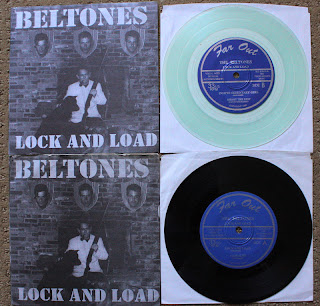 Let me ask you, have you guys thought out this scenario in your head: your house is on fire and you only have time to save one record, which records would you save? Well without a doubt, I would save my copy of "Lock and Load" on Clear. This is the Beltones first release ever on Far Out Records and it came out in 1995. I don't know about how many were pressed on black, but there were /100 pressed on clear. I have never seen a clear copy go up for sale since I bought mine in 2006, and "Beltones" is always the first search I do every time I sign onto ebay. The black copies pop up every once in a great while, but even the black copies maybe will pop up twice a year. As far as I know, there hasn't been a clear copy on sale since 2006! At the time I paid $40 for this, which is an absolute steal! I'm sure I could put it up with a $200 BIN and have no problems getting it, but fuck that. This is some of my favorite Beltones shit ever recorded, all these songs were on their debut album "On Deaf Ears" but these were earlier versions of the recordings, and they are all a little bit slower and rawer. They just sound amazing. 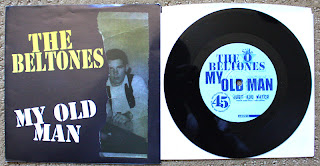 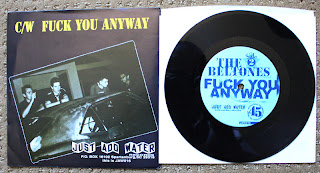 Here is an equally hard to find vinyl, with early recordings two of their best songs ever "My old Man" and "Fuck You Anyway". This came out in 1996 on "Just Add Water" Records, and had /100 on White vinyl. Several months back, I had a chance to pick up a white copy of this release and I fucked up majorly. As the time ticked down, my $80 bid quickly got blown out of the water and doubled! It ended up selling for around $170 and at the time I was thinking "wow, that is just way too much money", but now that time has passed and I know that I may never see a white copy again for years, I am starting to think that I should have gone over $200 for it. Lord knows when I will track down that white copy, but when I do victory will taste so, so sweet. I'm happy enough to have a black copy, because even these hardly ever pop up. 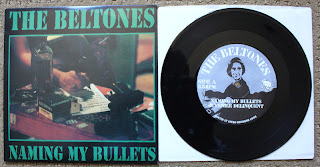 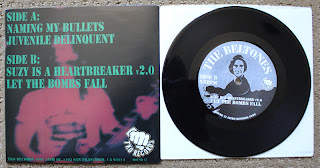 Here is "Naming my Bullets" that was released on TKO Records in 1998. All of these songs are the same recordings as the ones featured on "On Deaf Ears" on TKO, so this isn't quite as special as their other seven inches which feature songs ONLY available on those vinyls. This was pressed with /900 on black and /100 on green. The black copies are usually not too hard to find, I usually see one pop up every few months and you can get one for under $20. However, I have NEVER seen a green copy go up for sale, ever! If a green ever pops up, I don't know if I would drop the kind of coin on it that I would for "My Old Man" on white, but I am definitely going to be a major player on it. 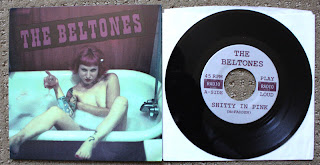 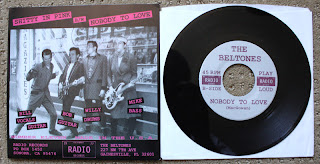 Here is their (by far) easiest to find vinyl, "Shitty in Pink" which came out in 2001 on Radio Records. I have the first pressing on black /1000. It also had a "tour pressing" with the Singers face imposed on the girl in the tub (pretty funny) out of /250, and /250 pressed on blue/green vinyl, with 50 of them being hand numbered with alternate covers. This was also repressed on 2011 on Modern Action records, with /300 on purple vinyl, /45 of which are on alternate hand painted covers. Confused yet? I never really felt the need to go after all these represses, but now I wish I did because I only have the most basic copy of the 2011 repress. Since there are so many different covers and versions of this release I never really actively pursued it, but hopefully one day I'll be able to acquire atleast most of those versions. This release has the song "Shitty in Pink" which was on their "Cheap Trinkets" album from 2001, and a cover of the Nips' song "Nobody to Love", which is a great cover.

So there you have it... My Beltones collection is FAR from complete, and even at where it stands I have been searching for copies for years. This stuff just doesn't come up very often (especially color copies), and when it does it is unfortunately out of my price range. This is a quest I will not give up on though, and I know one day I will have every piece to the puzzle. It may take me another 20 years, but hey it will happen. Thank you to everyone that has been reading my blog for the first 100 posts, keep coming back! Now for your listening pleasure here's "Fuck You Anyway" with lyrics:

Posted by Across Your Face at 3:44 PM