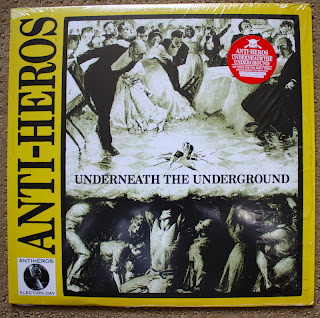 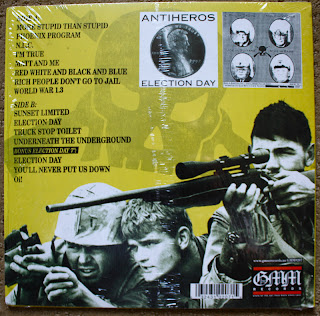 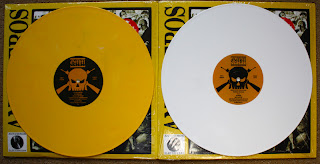 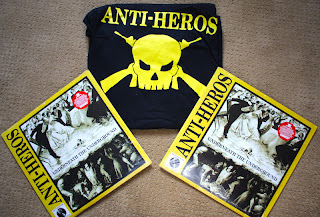 GMM Records recently released Anti-Heros 1999 (and final album) "Underneath the Underground" for the first time ever on vinyl. Anti-Heros, in my opinion, is the best Oi! band EVER. Yeah I said it. I was so psyched when I heard about this that I didn't hesitate to order the package deal from Victory for both copies and a T-Shirt. Although this record is not even close to their classics "That's Right!" and "Don't Tread On Me", this is still a solid album. It's surprising that this was never released on vinyl so I'm glad they got around to it. This release is /100 on yellow and /400 on white, pretty limited for such a heavy hitter Oi! group. I've actually been giving this album more listens on the ipod lately since I heard about it being repressed, and it has really grown on me in a big way. It's just that when you're so obsessed with their first two albums for a majority of your life, it's hard to accept anything else. So like I said, this really is one of my favorite bands ever and here is some proof..... 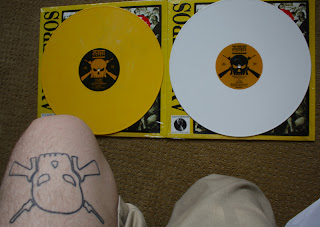 That's right baby, my first tattoo I ever got was on my thigh in order to hide it from my mom. I remember taking showers and always putting shorts on after before walking out of the bathroom. Eventually my mom jammed me up about it and wanted to know what I was hiding. When she saw it she was had an "I don't care" attitude about it, and so I didn't either and started getting more underage tattoos. Regardless, the Anti-Heros popped my tattoo cherry so if they are reading this then send me a test press to show your appreciation.

Posted by Across Your Face at 2:12 AM