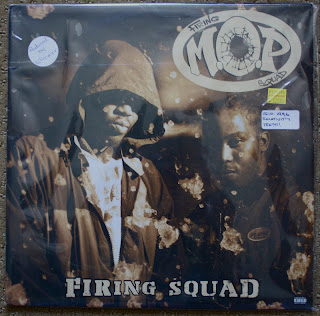 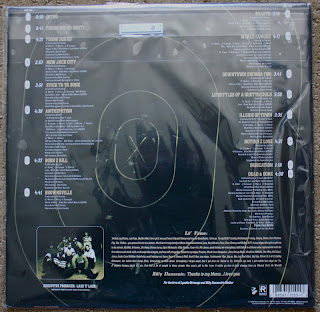 At a recent record store shopping trip that I mostly came up empty handed in the hardcore and punk sections, I was thrilled to find a gem in the hip hop section. One of my favorite groups of all time M.O.P. (Mash Out Posse)'s "Firing Squad" album from 1996, and an original pressing at that. Even though this is my second favorite M.O.P. album, behind "Warriorz", this is still a classic and essential hip hop album. If you ask my friend Max who is a complete hip hop connoisseur he will swear up and down that this is M.O.P.'s best album. For those of you that don't know M.O.P. and say you like hip hop, well, you suck. Billy Danze and Lil Fame (aka Fizzy Womack) are two of the hardest, rawest rappers ever and they blend perfectly together. Especially for someone that likes hardcore music, these guys are basically the hardcore version of hip hop. They yell and have a ton of energy. Crucial record. 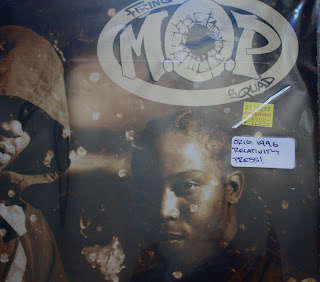 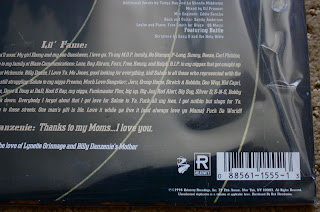 Although this is not necessarily super rare, it is still hard to track down and old hip hop LPs don't come around too often on ebay. Especially when you consider 90's hip hop on vinyl, they probably pressed a few thousands and most of them were used as promo copies. Back then, and even today, it is difficult to find most hip hop new releases on vinyl. It is especially difficult to find them with the real album art, as most hip hop LPs are promo copies, which basically mean they are a plain black sleeve with just a sticker on it with the rappers logo and the album name, and a little blurb about the album. Either way I'm stoked to own this now, and I'm just going to keep it sealed since I already know for a fact that this was only pressed on black vinyl. This is an original pressing on Relativity Records so it is much rarer than the later repress on Epic Records which was a 2LP version. Check out the rather corny video below for "World Famous" which suddenly turns into "Downtown Swinga", so the video is like half of both songs:

And still my favorite M.O.P. video, their first ever single "How About Some Hardcore?" So Good! This is the type of song that you can play at any social gathering and in the words of Lord Finesse, "turn a house party into a concert". My old band used to play this over the PA before we started our set: