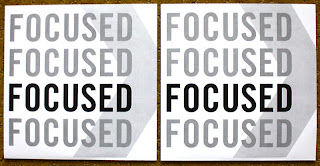 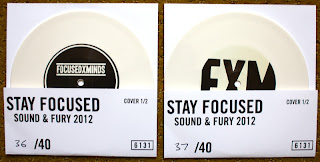 I just took over a hundred pictures of new records (that I've been lagging on taking for almost a month), and I don't have much time so I'll do a quick post. I didn't make it to Sound and Fury fest this year. There just wasn't enough bands that I really wanted to see for me to justify the cost. I was happy when I saw that 6131 was putting up their remaining copies of their Focused Minds "Stay Focused" S&F2012 press. I quickly headed over and ordered two copies, since one side says "Focused" and one side says "Minds", I figured I would get one of each. Unfortunately I received two copies of the "Focused" cover instead. Focused Minds is another one of those bands that I never was that into until I saw them live and was blown the fuck away. So don't get it twisted, these guys are really good. Now I'll have to be on the look out for the "Minds" cover on ebay. Stay tuned for a bunch new stuff in next couple weeks!
Posted by Across Your Face at 4:34 PM