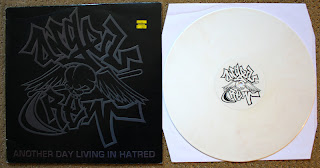 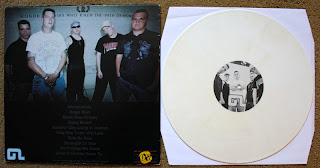 On a recent trip to San Francisco I got to stop by Amoeba Records and found quite the gem for $2.99. A slightly tore up copy of Angel Crew's "Another Day Living in Hatred". I have had this record on mp3 since 2001 and I have always loved it. Angel Crew was a European tough guy hardcore band from the early 2000s, and this record is raging as all hell. I have never owned any Angel Crew vinyl and honestly I haven't listened to this record in probably a year or two and had somewhat forgotten about it, but I was thrilled to find it for so cheap. After listening to this the last few days I am remembering now why I loved this release so much, this release is filled with absolute bangers. 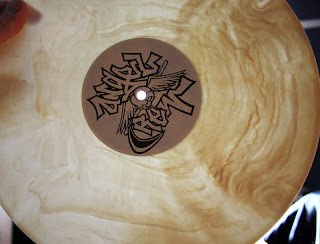 It came on what appeared to be normal white vinyl, but as I took it out at the house I was surprised to see that when held up to light its kind of an off white marble. Looks pretty interesting though. If you have never heard of these guys, check out the opening track below, ant that brutal intro:

Posted by Across Your Face at 3:58 PM