Welcome to the DANGERZONE 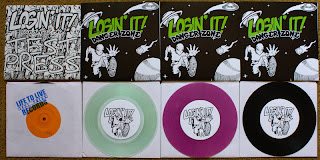 I was hesitant to put this post up yet but Mike at The One Thing That Still Holds True's post today inspired me. I was even going to name this post "Losin it in the Danger Zone", until I realized his post was the same exact name. Always one step ahead of me! Life to Live records really has it going on right now. They have three great new young bands in Losin' It, Step Aside and Provider and Losin' It is on a full US tour. The reason I was putting off posting this is because my collection is incomplete. I still need the pre order copy which I missed out on, but who knows when one will pop up on ebay and I could end up having to wait a year to find one,  so go check out Mike's pre order copy for now to get the full effect! Above is the Test Press /25, Clear /125, Violent /155, and Black /155. The violet copy I think is by far the best looking version. 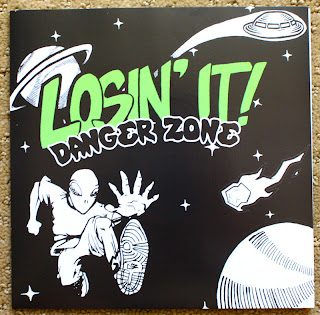 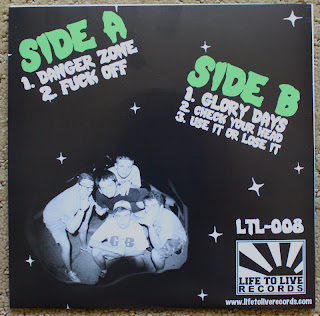 What is there not to love about the cover art? 1) Floorpunch is awesome. 2) Aliens are awesome. So a  Floorpunch alien, hardcore dancing through space? Hell yes that's awesome! This is a really awesome record too, good fun youth crew straight edge. You just can't go wrong. 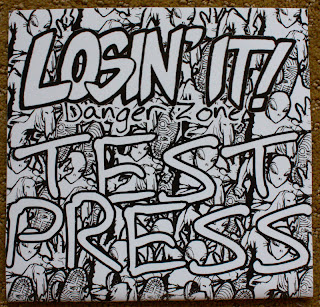 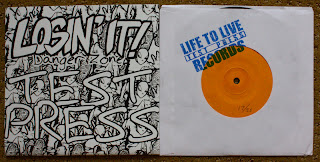 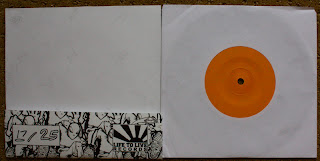 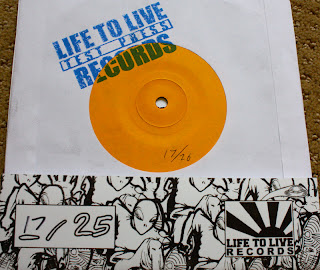 I was even more excited to get the test press. One of the band members from Truth Inside was selling it on Ebay before they took off for their US tour a few weeks ago, and I was able to snag it for $28. I think that may end up being a good price, depending on how well Losin' It catches on. It's kind of like getting a good players limited rookie card, but he's not quite on the all star team yet. As with all Life to Live test presses it is hand numbered on the sleeve and the record itself, and has the Life to Live stamp half on the record and half on the white sleeve. What's strange is the Sleeve says 17/25, but Dan wrote 17/26 on the record itself. I'll have to ask him when I see him when Losin' It comes to San Jose on their tour. Go check these guys out while they are on tour and snag one of these copies up before they are all gone! I think just before Dan shut down the Life to Live store for the tour, the clear and purple may have been all gone, so hopefully you can still scoop one somehow.
Posted by Across Your Face at 4:00 PM