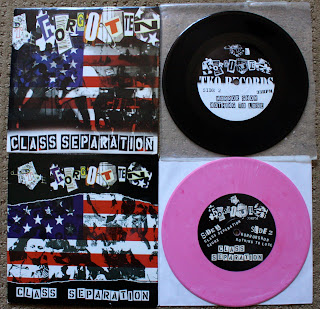 So this will be the first post of a series of posts I'm going to do called "More than just wax", stuff that has been in my collection for a very long time that has special meaning to me and I'll post little stories with it. For a while now I have been just posting mostly new stuff that I've been getting in and have left out my most sentimental records because I just felt they deserved my attention for a nice long post. First we have The Forgotten's "Class Separation" 7" that was TKO Records' Round 2. The Forgotten is a band from San Jose that still plays every once in a while, but have been inactive for long periods between now and then. During the late 90's, early 00's street punk glory days, the Forgotten were so big they would pack out any place they played. They were truly the king's of the South Bay at the time, and anyone from other parts of the Bay instantly thought of the Forgotten whenever you mentioned San Jose. Some of my best memories from shows as a kid was from Forgotten shows. This was one of the first vinyls I ever bought and I'm amazed it even still plays since it's been spun so many times. I got this about 1998 or 1999 around the time the 2nd pressing came out, and spun this over and over again on my dads record player. This has got to be in all time top 10 favorite 7"s list, ever. This release really started my interest in collecting vinyl, and after this I started to transition from buying Cd's to vinyl. Thanks Forgotten! 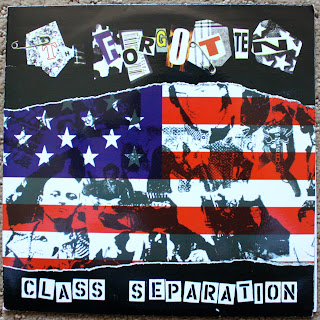 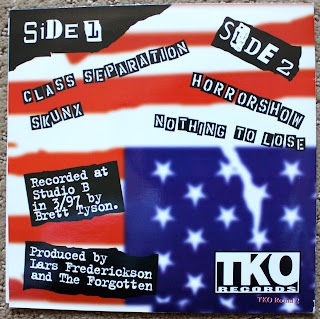 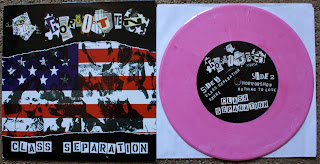 The 1st pressing came out in 1997 and was on pink vinyl. I'm not sure of the pressing info on this, I think I read once it was out of 500. If someone could clarify that would be fantastic. As you can see in the first picture, the first and second pressings had slightly different layouts. This was recorded at Studio B, which at the time was recording alot of the Bay Area heavy hitters. This copy took me years to find, but I got one about a year ago off ebay for only $1. It amazes me how much street punk has lost it's value. I remember around 2001, a friend of mine sold his pink copy to another friend for $30 bucks, which was hard for us to wrap our little 13 year old minds around. I even see a pink copy up now on ebay at a BIN of $5. 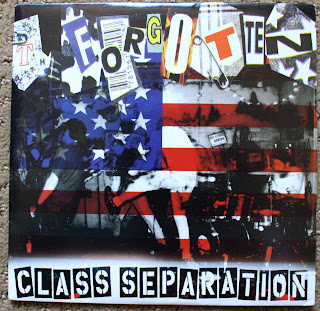 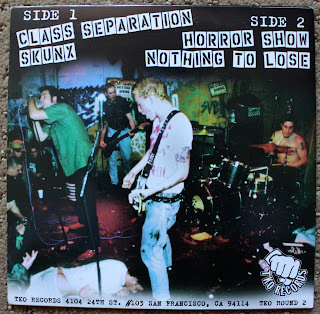 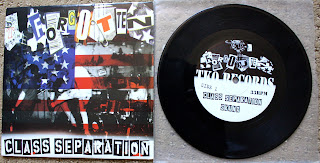 Here is the 2nd pressing, the actual copy that I've had for years. I know they pressed a bunch on black, probably over a thousand and I think 100 on gray. I have been meaning to pick up a copy on gray, but I haven't found one for the right price. I've seen people post them for $25, but I'm not really willing to pay that much when I know I can probably scoop one sooner or later for only a couple bucks. This record is one of the records that really got me out and inspired to go to shows. I would always go to the Cactus Club on Sundays for their all ages punk shows and when the Forgotten would head line it would be all sold out. I got introduced to alot of my favorite music through the Forgotten, since because of them I bought the "TKO Records Punch Drunk Vol. 1" sampler which introduced me to many of my all time favorite bands. That sampler had the likes of The Beltones, Anti-Heros, The Bodies, The Templars, Pressure Point, Reducers SF, Swingin' Utters, The Workin' Stiffs, The Randumbs, Dead End Cruisers, The Truents and even US Bombs and Dropkick Murphy's were on that damn thing. This was probably the most influential CD on me ever and these are the bands that always have and always will mean the most to me. If anyone from TKO is reading this, PLEASE reissue that compilation on Vinyl! It is far too important to be wasting away on CD format. So there you go... Many of you grew up on hardcore but this is what meant everything to me and made me what I am today. Long live that Oi! punk sound. Check out the title track from this 7" below:

"The common man's screaming down in the halls, while Oi! Boy kicks down the fuckin walls"

Posted by Across Your Face at 1:33 PM