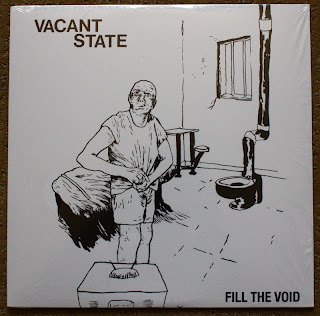 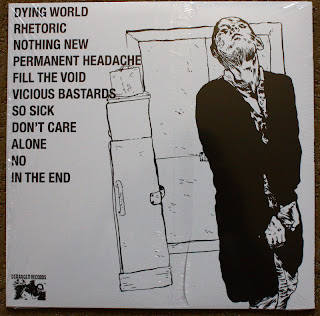 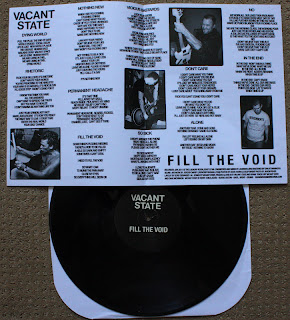 As discussed in my CREEM post, I really can't put my finger on what makes bands popular or fuels the hype. I really think it has to do with several things besides the music itself, such as: where the band is from, how often they tour, what label their on, band image and marketing, etc. I am very happy to see a band like Boston Strangler blowing up, but it confuses me why so many other great similar bands are hardly given any attention. Canada's Vacant State is one of my favorite bands right now, and all their material is really amazing. They bring that early 80's Boston hardcore with a little Oi! flavor and are pissed as all hell, with pissed off negative vocals and lots of distortion. This release came out in 2011 on Deranged Records, and according to discogs there was only 500 pressed on black. If that's true and only 500 were pressed on this, I'm amazed this is not long OOP and going for ridiculous amounts on ebay. This record is a fucking classic! At the end of the year I'll probably have to make a top 10 list for 2011 AND 2012 since I didn't do one last year, and I can't imagine ten other records in the last 2 years to keep this out of my top 10. 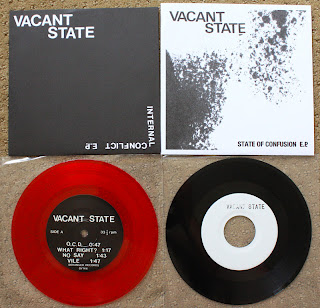 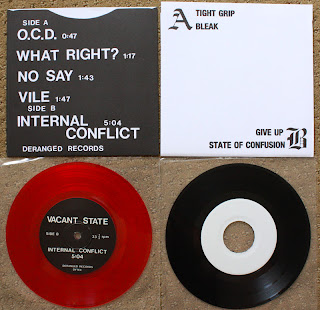 Here is my copies of "Internal Conflict" on Deranged Records (red) and "State of Confusion" which was a self release. I like how State of Confusion has a cool "Vacant State" stamp on the A-side. Both of these are fantastic as hell also. I prefer "State of Confusion" between these too, it seems to have a little bit more of a raw, less polished feel to it. I would go pick up both of these if I were you though and decide for yourself. Listen below to Vacant State's title track "Fill the Void" from their LP:

Posted by Across Your Face at 2:42 PM