COMMITMENT CREW - What Are You? 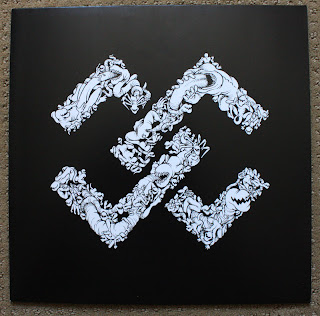 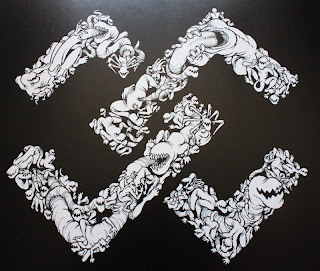 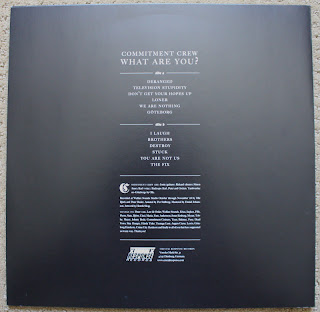 Here is Commitment Crew's - What are you? LP on Germany's Crucial Response Records. Pressing info is /500 Black vinyl, /261 Red and /261 Blue. I think this title appropriately fits this band, because at times this release flirts with epic Oi! and at times it flirts with being generic and incredibly annoying. You know me, I have to keep it real. It's not like every record I buy is the good. The music on this thing is great, but the vocals really kill it for me. I've said it time and time again, the vocals will make or break any band for me. The singer pretty much sounds just like the vocalist from 86 Mentality at times, which is awesome, but then he goes into this throaty super Oi! yell that instead of sounding cool, sounds more like someone gargling listerine or a cat getting choked. So much potential. That being said it's not all bad. I still feel this release was well worth my $12 and an occasional listen. But am I going to fork over the big bucks to get the red and blue copies from Germany, like I did with the Shipwrecked LP? Hell to the no no. 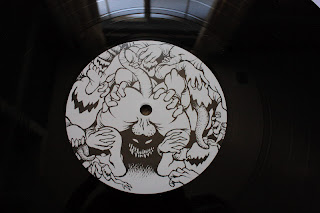 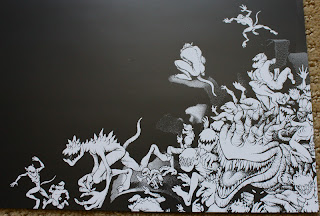 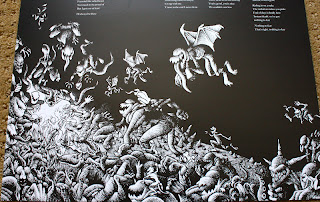 As seen in the cover art, the artwork is definitely incredible. At first I thought it looked stupid because I couldn't really see what it was. The pictures on Grave Mistake weren't all that clear when I bought it. I could clearly see the CC, but I thought it was some celtic crap or flowers or something. But after getting the actual record in my hands I could see what was going on. all these demented little demons and monsters. Hell yeah. Really cool artwork in the layout too, but the best is on the record itself. Yes, they used the label hole as a butthole for some demon. I don't think I've ever seen the hole on a record used as a butthole. Either way this record is atleast worth a listen. If you can deal with the annoying vocals, then you may end up loving this.
Posted by Across Your Face at 4:16 PM