ROTTEN FUX ARE PIST AS FUK! 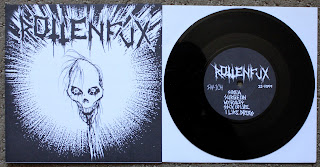 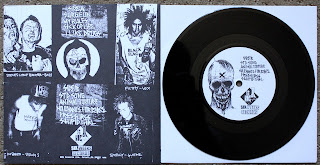 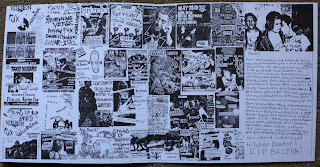 So I needed to balance out all the straight edge stuff I've been posting lately (and it seems that all my next pictures for upcoming posts seem to be of straight edge hardcore bands too) with the extreme opposite with San Jose's ROTTEN FUX. This release came out in 2006 I think on Six Weeks Records. I don't usually listen to music like this, but of course I am biased because these guys are all my friends, and I have known some of them for 10 plus years now. Even looking at the inside of this makes me all reminiscent, playing alot of these shows my self or atleast going to most of them. Love them or hate them, Rotten Fux we're a big name for a long time in the Bay Area hardcore scene, playing a ton of big shows on a regular basis all over the Bay. Rotten Fux name has always been surrounded by controversy as well. You may look at them and see spikey hair and studded leather and not associate this with "tough guy" hardcore, but trust me these guys would fuck you up faster than any of these so called tough guy bands that are playing right now. Rotten Fux we're known for having some of the most violent and crazy shows in the Bay Area, and it wouldn't be a huge shock for them to stop in their seat to beat someone's ass and then return back to the finish up the set, or to have a huge fight of 30 kids infront of the venue swinging chains, throwing bottles and hitting each other with brass knuckles. These guys didn't hesitate to write offensive songs either, with titles like "Animal Torture", "I Like Drugs", "STD Song", "No Chance for Peace", and those are just on this seven inch alone so you can only imagine what the rest of their stuff was like. Either way if you like that fast style, you should pick one up on ebay for $5 here. I know they pressed 500 at the time, and I really doubt there are that many left. Here is my favorite song below from this release, "My Rules":

They don't have much live footage on youtube, being pre cell phone video era and all, but here's a little 30 second clip of what most of their shows looked like. A good time to be had by all!