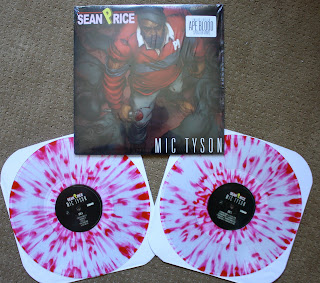 Sean Price is one of my favorite rappers ever. You may know him as the rapper with Cold World on "How the Gods Chill", but he has had a 20 plus year career in underground hip hop. He is in my top 10 dead OR alive favorite rappers, and is criminally under rated. When I saw the pre order for his latest LP (and first album since his 2007 classic "Jesus Price Superstar"), I was all over it. I was thrilled to find out that the pre orders came on a limited "Ape Blood" splatter vinyl that goes perfectly with the cover. It is hard to see in my crappy pictures but he basically beat the hell out of a bunch of apes. This is kind of a play on his first album where he was on the cover fighting with a bunch of apes (see below). 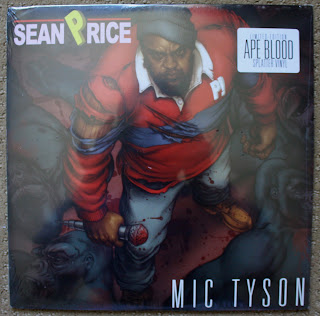 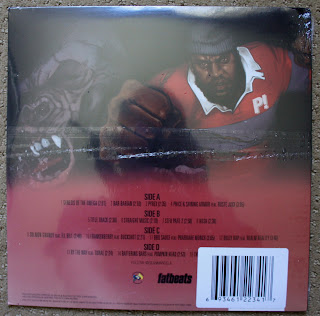 Unfortunately, this is probably the weakest of all of Sean P's full lengths. However, weak for Sean Price standards is basically head and shoulders above 99% of the competition, so this is still a great album. Also, considering his other two LP's ("Monkey Bars" and "Jesus Price Superstars") are considered some of the best East Coast hardcore hip hop albums ever made. I was really hoping this would be on the same level as his first two albums, but rappers can't make classics with every release. It just doesn't happen. With all that being said,  there are still some serious heaters on this album. Sean P really goes all out against main stream rap and bullshit in the hip hop culture. Lines like "you a happy meal nigga with a toy in the box, I clap the steel nigga, put your boy in a box" or "Wake up all the crack in the street talk... It's made up like Jack and the bean stalk" are just fucking brutal. At 40+ years old, Sean P still got it.

Check out my favorite track "Pyrex" below: