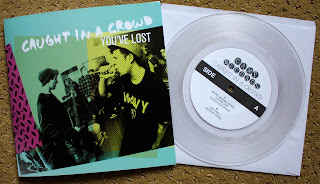 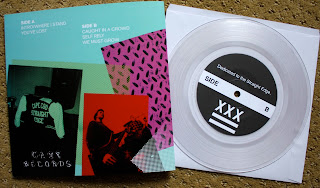 Mike posting this nice piece about receiving the above record yesterday sparked me to finally put up my impressions of my experience. Mike is a really nice and patient guy, and I'm glad it worked out for him. I think that I am wound a little bit more tight than Mike is, so I am still fucking furious with Camp records about this release.

Like Mike, I ordered my copy well over a year ago after seeing Mindset post something about this new up and coming band that is going to be the shit. Ok cool, I figure I will check them out and scoop some limited vinyl. No problem. Months and months go by, emails don't get responded to, false promises come out on facebook that they are going to release the record over and over again and it never comes out. I went to paypal and tried to get my money back, but too much time had passed. I sent emails to the label that never got replied to asking for a refund, and I never got any responses. I pretty much gave up. I figured it was Flatspot Records all over again.

Finally about a month ago I got a package in the mail with the records I ordered. It had some stupid ass letter saying I was awesome for waiting for so long or something along those lines. Man, Fuck you. Don't fuck with me, don't fuck with my records. Those are two things you don't want to do. And then send me some corn ball shit to boot? You should have atleast added some extra free shit.

What sucks is this is a really good release and it will probably be worth a lot of money soon. It is the limited version on /100, with /500 also being pressed on black. Caught in a Crowd will be having a record come out on React records soon. Hopefully they will get it to me sooner than Camp did. 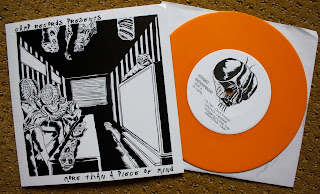 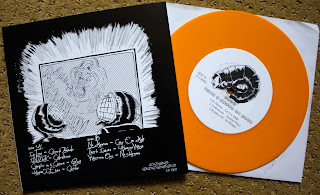 I also picked up Camp's "More Than A Piece of Mind" comp, which features some pretty good bands. This is on "solid yellow" (but it's really just orange) out of /100. These are still available, but I would not recommend ever buying anything directly from Camp unless you are a glutton for punishment.

And as with all "Labels Behaving Badly" posts, check out another episode of People Behaving Badly from my main man Stanley Roberts: