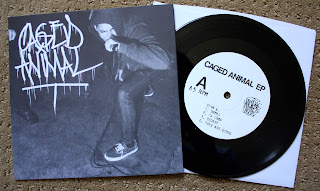 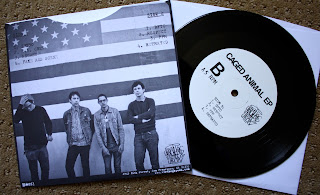 I had what felt like a cruel April Fool's style joke played on me several weeks ago when Caged Animal (a Bay Area hardcore band I haven't seen yet) was set to play with Trapped Under Ice and Soul Search in San Francisco. I went to buy my tickets to find it was long sold out, Oops. I screwed the pooch on that one. So I missed the show and was really bummed, I was really looking forward to seeing these guys. The graffiti on the cover is what originally drew me to buying this, and I've heard these guys be compared to the likes of Negative Approach. I can see that relation. This is a pretty good release, and I think this band will get better over time. Definitely worth checking out and I could see these guys blowing up soon. They are raw and hard as hell, that is for sure.

I was stoked when I put this on my deck and heard the San Jose homey the artist formerly known as Corny Jones, aka Antwon doing the intro. He's a San Jose hardcore kid named Tony that has been a part of the local hardcore/punk scene for years but now he's blowing up doing his rap stuff. He's on tour with Odd Future or something right now. If you are a fan of Steven McQueen, the movie Bullet, or just good rap then check out his video below (Antwon - Helicopters):

Posted by Across Your Face at 6:45 PM