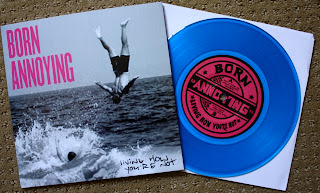 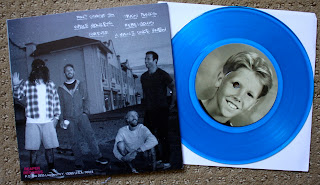 So recently I picked up the combo pack for the Born Annoying "Living How You're Not" EP from Reaper. It came on blue out of /762 and clear out of /212. When I received my package I noticed I just had 2 copies of blue vinyl. I emailed Reaper, and they said they are out of clear. Well, that pretty much sucks. I only ordered the blue because it was only a couple dollars more in the combo, but I was really just interested in the clear vinyl.

As far as the release itself, I'm not really too impressed by it. The music is tight and crisp, and truly is on point. However, I'll say it over and over again; my opinion of releases live and die with the vocals. The vocals on this just annoyed me right from the first listen. They have an angry, screachy, pre pubescent sound to it that reminds me of nails on a chalk board.

On a side note, the cover art is really strange on this, but for whatever reason I think it's really cool. I cannot put my finger on it. Would have loved to seen this come on a pink vinyl to match the Born Annoying text.

Posted by Across Your Face at 4:48 AM