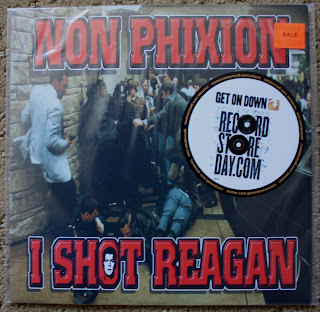 Record Store Day 2013. I am going to keep this particular post with no whining and my real feelings on RSD. I will wait for that for the next post. Ultimately, I got a few releases that I was really excited for, but some of the ones I wanted most I missed out on. I'll give the whole story for that later... 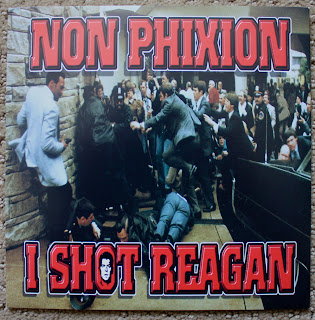 Now let's get down to business. Here is a 7" release by New York's late 90's/early 00's underground hip hop group Non Phixion. Non Phixion consisted of Ill Bill, Goretex and Sabac Red. Their single "I Shot Reagan" is a classic and was originally released in 1998 and is very hard to find. Needless to say, when I saw this was being released I was super excited about it. This release is probably still available at my record store since most of those main stream bozos have no clue what this shit is. People were trying to ask me about it in line and I was very cranky, so I ended up telling some jack ass "Heard of google?". 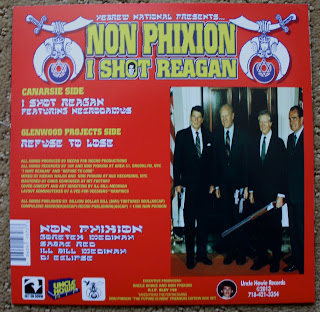 Here I am whining on my non whiney post. Stay focused. This is an AWESOME single. Two of Non Phixion's hardest songs, and I am super happy they re-released this. This was one of the only bright spots of my RSD 2013. 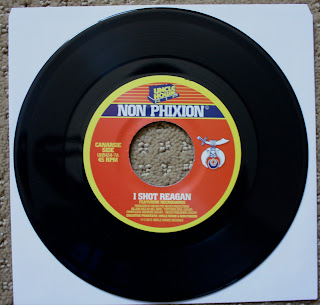 Non Phixion obviously got the name from the Suicidal Tendencies song. Ill Bill is a big fan of hardcore and constantly referencing to hardcore songs/bands in his lyrics. For all you hardcore kids out there, you'll probably find this still weeks from now in your RSD leftovers bin at your local store and it is worth it to pick up for your first hip hop 7". Out of all the rap shit I have, this is my FIRST 7", because it's typically always on 12". My only gripe with this release is that they didn't release it on red or yellow vinyl, which I think would have gone so great with the cover.