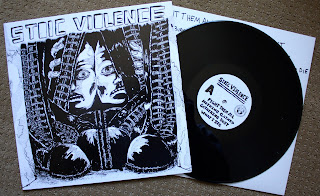 Surely to be one of the best releases of 2013, behold Southern California's STOIC VIOLENCE 8 song LP. This is an absolute shredder from start to finish of old school hardcore similar to Negative Approach. The vocals are very similar to those of 86 Mentality and Violent Future, except Stoic Violence is defintely faster than those two. You can download this entire release for free here, so there is no excuse for you not to be jamming this! This was released on Katorga Works and Video Disease records. Katorga Works has been putting out some serious heavy hitters. 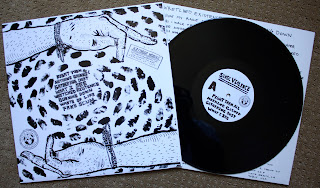 This release has really awesome artwork. The faces are looking through laced up boots as if they are behind bars, interesting. My copy is on black vinyl and I don't know if any color vinyl was released for this. It will be interesting to see how well these guys are perceived. I am sure if they were from Boston or something they would be blown up as hell by now, but since they are from the West Coast it may take a little more time for people to catch on. Don't be fooled, this is an amazing release and is deserving of any and all hype that it receives. 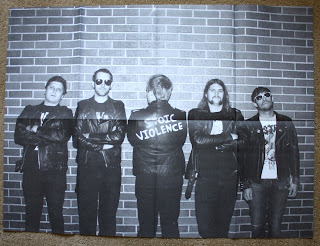 A big old poster insert. Sweet jacket. Listen to "Fight Them All" below and try and tell me that doesn't pump you the fuck up!? I'm hoping these guys come play in the Bay Area soon, I am so there!

Posted by Across Your Face at 1:12 PM