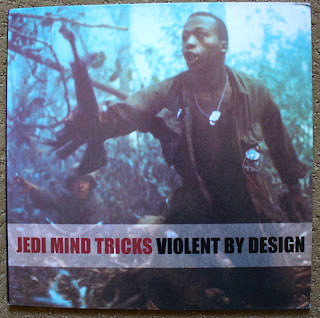 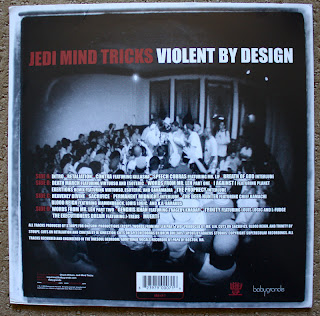 Here is one I had to go diggin' in the crates for. When I bought this almost 10 years ago and I had the choice of getting it on CD or LP, I am glad I opted for the LP. As a 15 year old kid, I am glad I had the insight of downloading the shit for free off the internet and owning a copy of it on vinyl. In my room I had a little shitty CD boom box, but for my record player I had my dads old stereo set up with two big ass Technic speakers and an old Technic record player. So basically I was faced with either A) listening to CD's on a shitty boom box or in my car, or B) listening to vinyl on some big ass speakers and rocking the fuck out. Needless to say, this very record got the neighbors coming pounding on my door telling me to keep that shit down on more than one occasion.

Some say that Jedi Mind Tricks "Violent by Design" is their classic album. I believe it's Legacy of Blood, then Violent by Design, but to each its own. This is not the original 1999 pressing on Superegular Recordings, but the 2003 repress on Babygrande. Either way, you can't really find this release for under $50 dollars anymore. For a while these were going on ebay for upwards of $100 dollars! 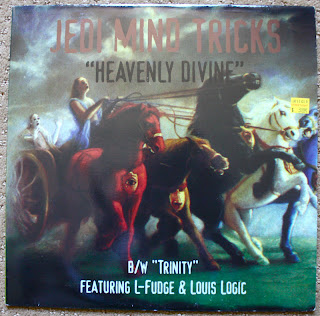 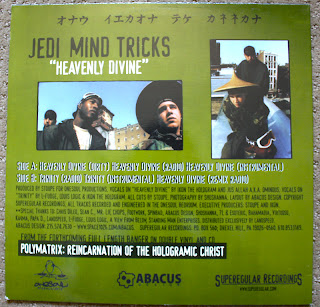 Here is my copy of the "Heavenly Divine" single on Superegular Recordings. Heavenly Divine is definitely the most well known song on the album, and probably still Jedi Mind Tricks most famous song. When this LP was recorded JMT consisted of Vinnie Paz, Jus Allah and Stoupe the Enemy of Mankind on production. After this release Jus Allah had a falling out from the group, and rejoined years later in 2008 on "A History of Violence". But its like when he came back his voice sounded all weird and way too gruff, so to me this release and his one solo album are the only releases where he actually sounds good. Check out Heavenly Divine below:

And check out one of Vinnie Paz's most recent solo tracks. For those of you that don't know Vinnie Paz is all about that hardcore shit, check him out repping that Trapped Under Ice and Terror merch: