Catching Up on School Jerks

At this stage in the blogging game, it gets hard to keep up with what I have and haven't already posted. For example on my last Night Birds post, as I was writing it I searched for my post that I thought I did on "Other Side of Darkness" so I could put a link to it, and to my surprise it was all a dream. I had taken the pictures, and it was backlogged with hundreds of other records.

As I was getting ready to post the other new Grave Mistake release by School Jerks, again I went to post a link to some previous School Jerks records that I thought I had posted that were all imaginary. Ok, well I'll get to Other Side of Darkness some other time, but for now all also include the other School Jerks 7"s! 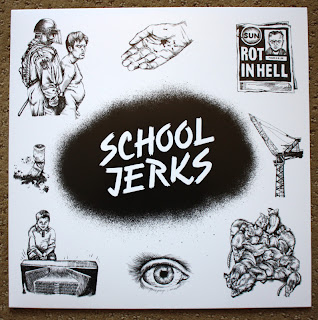 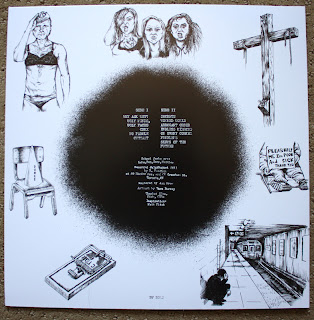 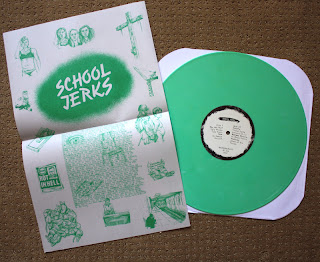 Here is Toronto's School Jerks' latest release on a gorgeous sea green marble vinyl, or as GM coined it "Green Slime". Great release of raw, fast, snotty old school punk rock. I feel like I'm drinking a 40 and hanging out a Shady Acres when I put this one on (my SJ folks know what I mean). Fantastic artwork on this, in a way it almost reminds me of the old Age of Quarrel demo cover with all the twisted shit going on. I love how the vinyl perfectly matches the ink color on the poster. The green vinyl is out of /200 and still available from Grave Mistake, so don't get caught slipping. 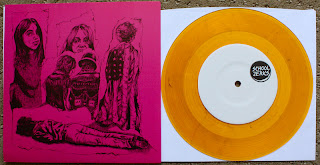 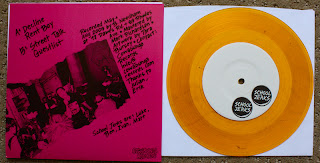 Here is the School Jerks' "PPDSCEMFOBBT" 7 inch on Cowabunga. What the hell that title means? Good question. More interesting art work. This is a 3rd press on gold vinyl. Cowabunga's "Discography" page states this is out of /107, yet the Cowabunga store states its out of /100. 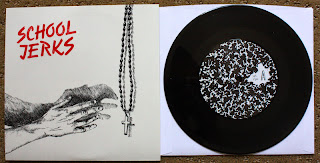 And their "Control" 7" on black vinyl out of /900, also on Cowabunga. This release had /100 on clear, which would be nice to eventually track down. I am really digging all this School Jerks art work. What makes this release interesting is apparently the red "School Jerks" logo is hand stamped on all 1000 sleeves, so basically every sleeve looks different. Man, that must have taken forever.

What really irks me about this post is the fact that I have their "Nothing Else" EP and I never took pictures of it, but I am far too lazy to go dig it up and take pictures of it so you'll just have to take my word for it.

Posted by Across Your Face at 3:38 PM