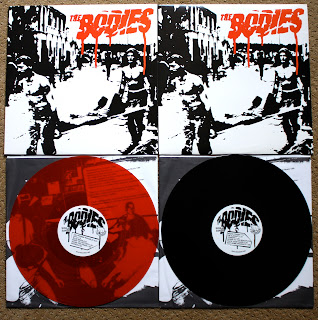 This is a post I've been waiting on for a while. One of my all time favorite albums and bands, The Bodies' S/T LP which came out on TKO Records in 1998. I've said it again and again, while most chase after Rev vinyl or other labels, I am all about early TKO vinyl. I'm not sure if I talked about it before but I'll tell the story again. When I was a kid I took a chance on some compilation CD that was selling for a few bucks at my local record store. It was the first volume of Punch Drunk by TKO Records. That damn CD single handedly changed my life and changed me forever. Ever since I first heard that comp, I have been chasing down nearly every band on that CD. The Bodies were on that comp, and there track was one of my favorite songs. Also on that comp was the Beltones, Anti Heros, The Templars, The Forgotten, Reducers SF, Swingin Utters, and a bunch more. In my opinion, this is the best compilation EVER made, Yes to me it is more important than any of the old classic compilations. 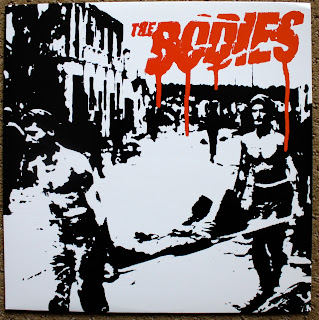 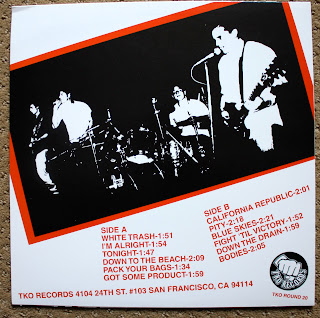 The first time I ever went to see the Bodies play in San Francisco, I got beat up at the show for being from San Jose. The Oi! and Street punk scene in the Bay Area was very violent in the early 00's, and crews had no problems beating the shit out of little kids coming to punk shows. Sadly for years I avoided Bodies shows because of all the drama and violence that surrounded them. It was really hard being from San Jose back then. If you were from San Jose then you would have to fight at almost every show that was out of town. Now things are so peaceful at shows, I can go anywhere and not have to worry about it. It makes me sad to think of all kinds of Bodies shows I missed as a kid. I would say from 1999 to 2003, gangs were such a problem at SF and Oakland shows that it wasn't even worth going. I'm glad those days are behind us now. 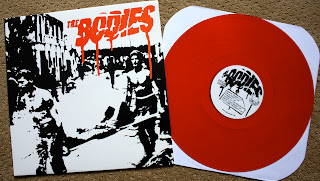 This album on glorious red is one of my most important pieces of vinyl. TKO Records only used to press maybe /100 on color and the rest on black. This red vinyl is out of /100 and is impossible to find. I think the black vinyl is out of /900, but I'm not positive on that. It took me years (and lots of money) to acquire this. What's amazing is that the Bodies never really toured that much and weren't that big, but have a huge cult like following that will pay retarded prices for their vinyl. These guys maybe play about once a year now, and whenever they do it is a big deal. I saw them last year in Oakland and they almost sold out the Uptown, which is a huge club. I was shocked at how many people came out to see them and were going totally postal. (You can watch the footage I shot of it here). This is my 2nd most important record, after my Beltones "Lock and Load" 7" on clear. 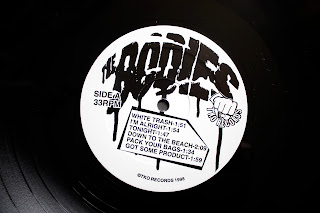 This album is an absolute classic. Every song fucking rules. One thing about the Bodies is that pretty much all their songs sound the same. That is fine with me, because they are all awesome. They are all simple as fuck and very catchy usually with an easy sing along chorus. Their vocalist changes his voice drastically on certain songs on this album, to the point where it almost sounds like two different singers.  No matter how Abe sings, it sounds incredible. His voice has always reminded me a bit of old Glenn Danzig ala Misfits (think "Hybrid Moments"...). My favorite track on this is "Down the Drain", a song about him losing a friend to the world of drugs. "I saw another plane go down in the neighborhood tonight, Saw another friend spiral down out of sight..." 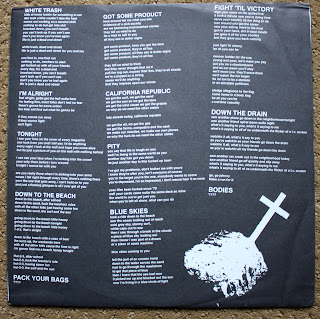 Instead of a standard white sleeve or an insert it comes with a printed insert containing the lyrics on one side and a live shot and some info on the back. 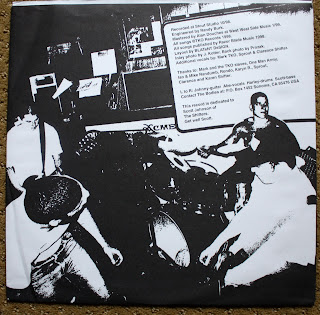 The Bodies are deffinitely one of the most fun and entertaining live bands I've ever seen. They usually play somewhere in between really drunk and blacked out drunk. They have been known to fall around the stage and act a damn fool. Their singer always seems to forget half the lyrics and will just start singing non sense, and everyone loves it! Most of their songs are real happy go lucky and their shows are always a blast. Despite for a few years over 10 years ago where they had a lot of shit heads causing problems at their shows, their shows now are a total blast and everyone just has a great time. Last time I saw them in Oakland, their guitarist poured a full beer right on top of my head. All in good fun! Check them out live below playing "California Republic" to see how much fun their shows are:

And the song that started it all for me. "Pack Your Bags" which was on this release and Punch Drunk vol 1: