No Gods, No Masters 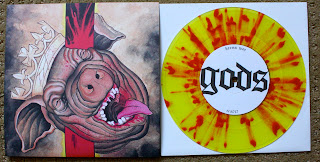 I remember seeing Harms Way at a Locust Street house party in San Jose when they first started. They were on one of their first tours with Weekend Nachos. At the time, no one really knew who Harms Way or Weekend Nachos was, and it's crazy now how big they have become. I have read alot of stuff online about them being "assholes" or whatever, but my only recollection of them is being cool dudes. I remember I bought their first two seven inches at the show, and their singer who was selling the merch gave me a free t shirt with it. It was one of those shirts with the pentagram and the goats head on it that everyone has. What's funny is those two seven inches are somewhat of a rarity now, and I've seen them go for stupid prices on Ebay. I got this "No Gods, No Masters" EP sometime last year. Not really too sure on the pressing info. Come to think of it, I have pretty much everything that these guys had done early on (3 seven inches and 2 twelve inches) and this is the first time I've posted any of it. Hmph. 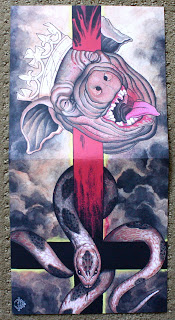 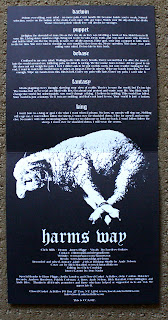 Pretty sweet artwork, going with their kind of weird satanic-ey theme. Honestly though, I really can't listen to Harms Way very often. I have never been into metal and I like lyrics that I can kind of understand, which Harms Way doesn't provide. One thing I will say about them is that they are heavy as all hell, and when I'm in that certain mood they are super refreshing. Kind of like Indian food, it is something I enjoy occasionally, but I can't eat that shit all the time like I can Mexican food, ya dig?

Posted by Across Your Face at 8:29 PM