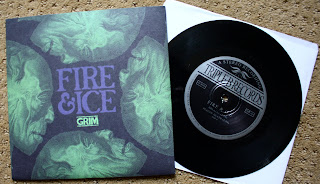 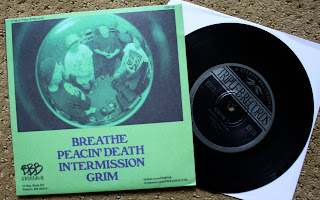 A few months back I ordered a sweet Fire and Ice wind breaker from their big cartel. After about a month of no wind breaker and no word I started emailing them to bug them about it. It took a couple weeks but finally I basically got an apology and was assured that I would get a "surprise" with my wind breaker. Visions started coming of a Fire and Ice test press, or maybe even a rare record release copy of one of their releases or something cool like that. I waited anxiously for my wind breaker and my "surprise". Well, it turned out to be a rather anti climactic copy of "Grim" on black vinyl. Major let down, but still a nice gesture I suppose. I didn't have a copy of this 7", so I'll take it.

If you want to see what a real Fire and Ice collection looks like, then read The One Thing That Still Holds True. My shit is just stupid boring compared to this: 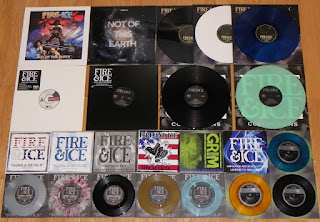 Posted by Across Your Face at 6:34 PM

Email ThisBlogThis!Share to TwitterShare to FacebookShare to Pinterest
Labels: Fire and Ice, Hardcore, Triple B