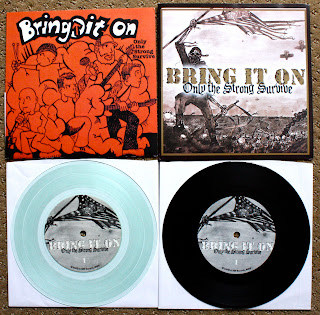 Since Mindset just showed my blog some love by posting a link to it on their facebook, I figured I would show Baltimore some love by putting up the Bring it On "Only the Strong Survive" 7". I also wanted to show Baltimore some love for winning the Superbowl yesterday. As an Oakland Raiders fan that lives in the Bay Area, I would have hated to see the 49ers win and hear constant shit talking from my friends that are Niners fans. It was bad enough dealing with the Giants winning the world series two out of the last three years. So yeah, Good job Ravens!

Onto the wax... This was actually the first release for A389 records. I really didn't know anything about this but jumped to buy these in an ebay auction last year. I think the ebay add described it as "raw NYHC style from Baltimore" or something and then I saw the record release copy and I figured how bad can it be? I think I got both copies for about $5, can't beat that. 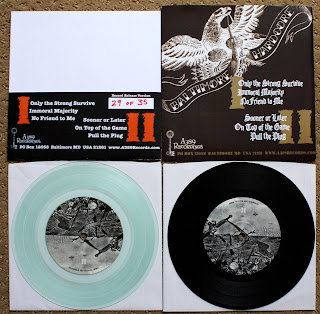 I was stoked to get the record release version with the alternate cover on clear. You can see the back is clearly labeled #29/35. Honestly though, I think the cover art for both versions is pretty terrible. With the corny skeleton  and Microsoft Paint text on the regular version, or the goofy cartoon on the record release version which doesn't resemble the music at all. However, the music on this is actually quite good. These guys really remind me of Sheer Terror. I don't really know anything about this band besides this seven inch, or any other pressing info on this release, so feel free to leave some comments if you have more insight on this matter. I'm sure my East Coast bloggers are more familiar with these guys. 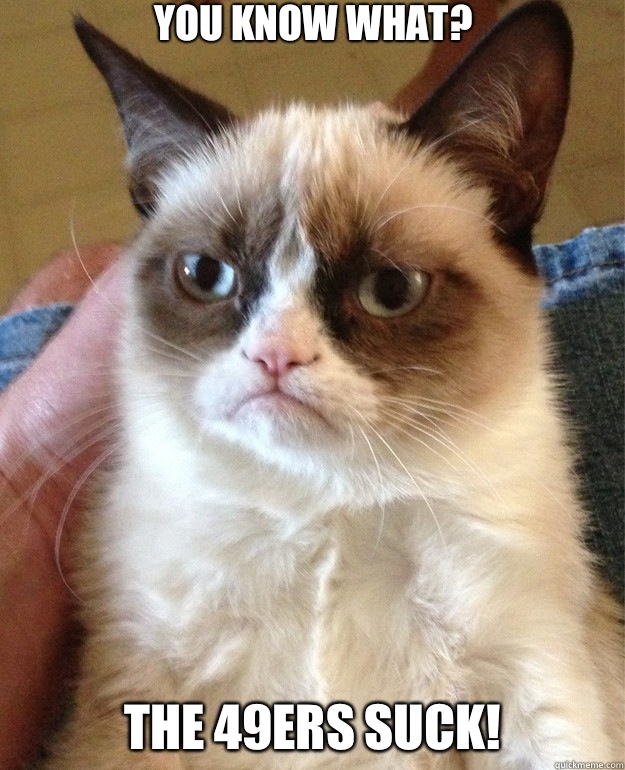 Posted by Across Your Face at 9:27 AM

Email ThisBlogThis!Share to TwitterShare to FacebookShare to Pinterest
Labels: A389, Bring It On, Hardcore