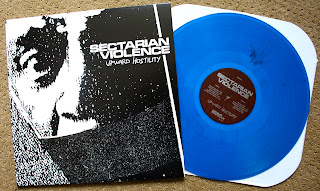 Back when I first started this blog, one of my first posts had Sectarian Violence's 7" from Grave Mistake. I can only laugh when I look back at the old pictures I took that look like shit. I liked that release at the time, but I pretty much listened to it once or twice and forgot about it. Nothing on that release really stuck with me enough to make me want to listen to it again. I wasn't really expecting a whole lot from this release, but being limited Grave Mistake vinyl I knew I would have to have it anyways. All that being said, Sectarian Violence knocked this one out of the park. This is a fantastic release, and no doubt will be in many Top 10 lists for 2013. 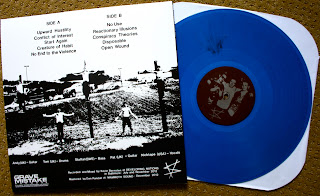 I feel like international straight edge hardcore powerhouse Sectarian Violence really found their niche on this release. What's funny is now that I go back and listen to their old 7", I love that shit now too. I don't know why I never gave it more of a chance. Right now, I am on a total S.V. kick. As of right now, this limited blue vinyl is still available and I believe it is out of /200. And you european fuckers can find this shit on even more limited vinyl at Carry the Weight Records! Don't sleep on this and end up regretting it. I may end up ordering this from Europe as well. 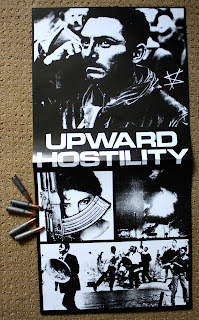 I love the simple design of this record and the poster. Since it has a chick with an AK-47, I just so happened to have some AK rounds lying around so I figured I would throw them in the pic to give all you non gun nerds an idea what an AK round (7.62 x 39mm) looks like. Actually, judging from the indentations on the wood grips in the picture that rifle very well may be an AK-74 which chambers a smaller round, but let's not get all technical. This record rules, OK. 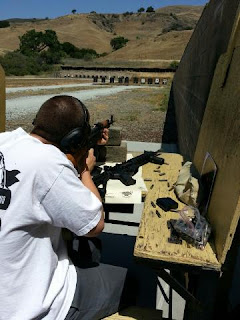 Posted by Across Your Face at 2:34 PM