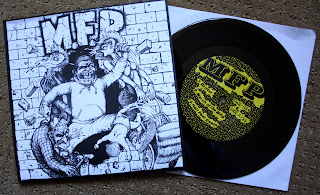 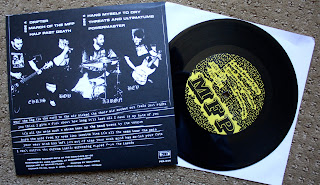 Towards the end of 2012 and the beginning of 2013, I was not paying a whole lot of attention to record collecting. Most of my attention was focused on other more important stuff, so I had totally slept on MFP. However, when Utopia Banished posted about them I took notice. Not too long after I headed over to Painkiller and picked up a copy of their 7".

As described on the Painkiller page; "hardcore influenced by hardcore", this is essentially stripped down Boston hardcore. Is there anything special about it? I don't really think so. I don't think MFP brings it to that next level the way some of the other Boston hardcore bands are doing with this similar style. Does that mean I don't like this EP? Fuck no, this thing is pretty darn good. Sometimes simple and generic is just what the doctor ordered, and this thing is plain fun all the way around. I just wish I would have gotten a copy on blue when I had a chance! On a side note, this may be remember as the best cover of the year. I mean, a HC kid breaking through a brick wall, with a baby flying out of a crib?Take no prisoners!

Posted by Across Your Face at 4:42 AM