Kicked In, and how people amaze me 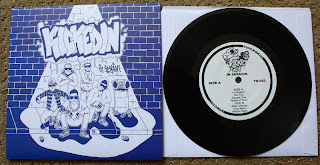 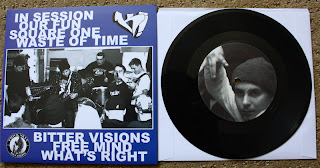 This release by Kansas City's Kicked In is pretty much what I've come to expect from good straight edge hardcore. They aren't doing anything to reshape the wheel, but damn that same old tried and true formula just works every time for me! This is a really solid 7 inch and deserves every bit as much credit as some of the "it" bands right now. Yeah, these guys can hang with anyone in this style of music right now.

Recently this band posted on facebook that they are now "75% straight edge", and the hatred and disappointment I read in some of the comments totally blew me away. I have never been straight edge, but I have been friends with alot of straight edge people and I'll drink right in front of them and they don't give a fuck or treat me any different. Come on people get a grip, it's not about what that person claims to be or what they do, it's how they treat you as a friend and person that counts. It goes without saying that you give respect to get respect, so of course if you treat someone with respect about their life choices and you are straight edge, you shouldn't expect to have some holding their drink or smoke right in your grill and trying to convince you to partake in their activities, they also need to respect your life choices. My best friend is straight edge and we go to shows together all the time, he is usually the designated driver and he comes with me to bars and hangs out all the time with no problems, so remove that stick from your behind and just have fun in life and respect people's choices. Even the way the band posted a facebook post with a decision in someones life like it was some TMZ segment was unbelievable to me. Either way, this "75% straight edge" band is really good, and I hope to check them out on tour sometime soon.
Posted by Across Your Face at 4:30 AM