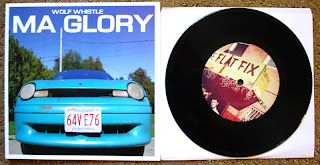 I pre ordered this Wolf Whistle 7" from Six Feet Under a while back not really knowing much about the band, but just seeing that they had shared members with a bunch of other good Boston hardcore bands. That' was good enough for me. I was pissed when I opened this up and saw it on black vinyl. I had to search around to find out that the black was the most limited color of all three colors. I haven't seen official pressing numbers on this release but I saw there are two different blue versions and one of them was out of /300, so I think it's safe to conclude that the black is most likely out of /100. If anyone knows the actual pressing info, please hit me on the head! Onto the music... I really don't know what to think about this release. Short, fast and aggressive hardcore directly to the point, but, I just need a little more than 50 second songs. It's like once the shit is really about to get good, the song ends. For what it is and considering the style of music, this is a good release. Just not really my style.
Posted by Across Your Face at 9:06 PM