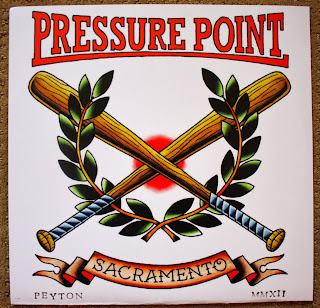 A few months back me and my best friend made the drive up to Sacramento to go to One Voice Fest. A bunch of great bands played that day, but we especially made the drive because the Cro-Mags played the first day. Pressure Point, one of my all time favorites also played and they did a limited cover for the festival. I have posted about this record before, and over the last year I have put a stupid amount of spins on this thing. It was release in 2007, but over the last year it has really become one of my favorites. Pressure Point is one of those top tier Oi! bands that you just can't fuck with. 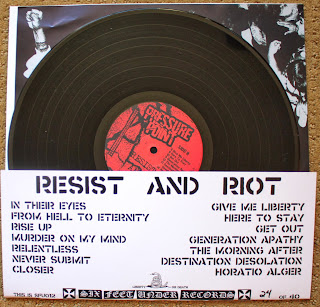 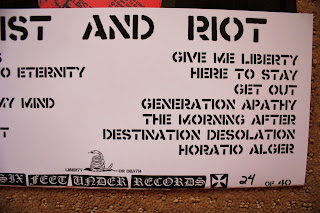 I got number #24/40. I love the Gadsen snake on the back. Also as a side note, the dude that did the cover art is a tattoo artist from Washington DC that also played in Set to Explode. 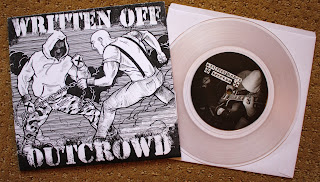 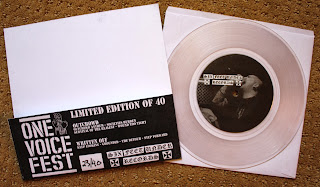 I also picked up this Written Off and Out Crowd split. I own a regular copy of this record, but I can't seem to find it in my posts? I guess I never blogged about it (yet). At the festival the guy that runs Six Feet Under was there and I said what's up to him. I didn't realize he used to play in the Boils, and I had met him in 2003 when my old band played with the Boils at a house party in the Santa Cruz mountains. Small world indeed. 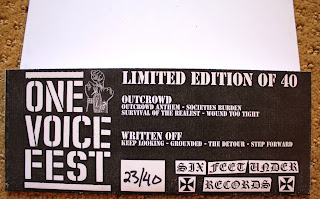 This was #23/40 and on clear vinyl. I was looking at my regular press of this release which is on white vinyl. I don't know the pressing info as far as the colors go, if you do know please leave a comment.

Posted by Across Your Face at 9:17 AM