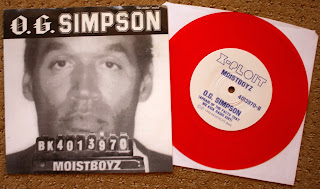 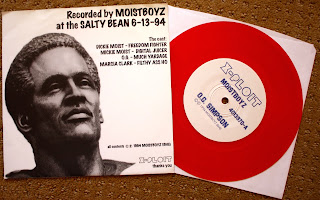 A few months back I picked up this 7" for 25 cents because the cover was so awesome. I really had no idea what the fuck it was, or even for sure what the band name was. But I mean, C'mon, it was recorded at "The Salty Bean" for christ sakes, so it was pretty obvious this was going to be a fun way to spend a quarter. Apparently the Moistboyz were an intentionally offensive side project of some band called Ween, that I've never heard of. Also from my internet observations, it appears that the Moistboyz still plays today and has a cult following, and likes to let everyone know that they will "never retire".

The music itself it kind of strange rock/old school punk similar to Iggy and the Stooges mixed with the Murder City Devils. This song by all accounts seems to be coming to the defense of OJ Simpson (I think? It's all quite bizarre). Either way, this is really cool and interesting and actually a catchy song. Check these guys playing this shit live in 1995. I'll definitely be on the lookout for more Moistboyz.

Email ThisBlogThis!Share to TwitterShare to FacebookShare to Pinterest
Labels: Moistboyz, Other, Punk, X-Ploit