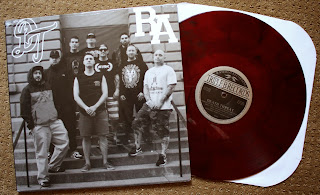 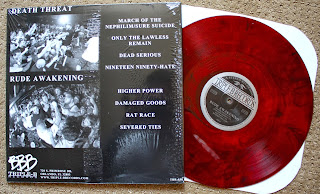 Above is the lasted offering from Triple B, the highly anticipated Death Threat and Rude Awakening split. This was the most limited color on red and black swirl out of /300, which is now sold out. They also have black /500 and clear red /700. Unfortunately, I am really disappointed with this release. I was really looking forward to some new Death Threat recordings because it has been a while, but these songs just seem flat and forced. DT's singer sounds really bored. I actually enjoy the Rude Awakening tracks on this alot more and I've never been a huge Rude Awakening fan. This release is no doubt Rude Awakening's best stuff they have made so far though, and they are sounding pretty fuckin' good I must say. On a plus note, I don't know what it is about the simple cover and lay out but I really love the cover art and layout for this release.
Posted by Across Your Face at 4:36 AM