My last "Labels behaving badly" post turned out to be a huge success. When I compared shady labels to local Bay Area news segment "People Behaving Badly" with Stanley Roberts, I was shocked to see Mr. Stanley Roberts himself stop by and leave a comment on my page! Well Stanley, I'm going to pay homage to you yet again by exposing another shady record label that's been fucking people over. 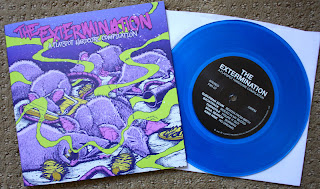 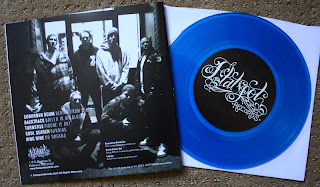 All the way back in April, yes over 6 months ago, I pre ordered the Extermination comp and a few other releases from Flatspot Records. Knowing it was a pre order, I knew I would have to wait a while for my order to come, no big deal. Time passes, and I see all over facebook that the comp is out and orders are shipping. Ok, cool, it should be coming any week now? A month or so goes by and nothing comes, so I decide to send them an email to see what's going on. I got a response in June "Yeah, I'll send it tomorrow" or something like that. A week or two goes by and nothing ever shows up, so I ask again what's up with it. No response. After over 10 emails over the course of 5 months, I finally begged the guy to just send me my records. This was after I even tried to deal with a refund through paypal, but surprise surprise; too much time had passed for a refund. What's a shame is this is an excellent compilation, and this record label has put out some great stuff, but this guy is shady as all hell. 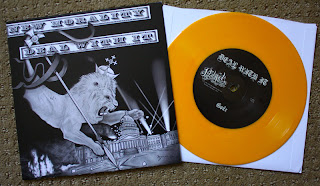 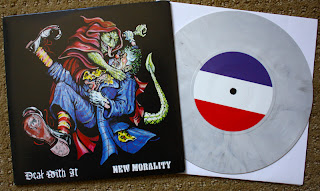 The Flatspot guy did say he would throw in some free records to make up for the long ass wait. I was thinking well, maybe if he threw in a test press or something I could forget about writing this post. No such luck, it turns out he just threw in a couple of filler distro records he had lying around. I did also buy the Deal with It and New Morality Splits, as well as a black copy of the Backtrack 08 Demo. It's a shame that a label that is putting out such solid stuff is fucking it up for themselves by being so shady and on top of that straight lying to people in emails. My poor friend Jake at Screaming for Records is still dealing with them trying to get his order too, and he's been getting the same treatment. Apparently Flatspot gets more shipments "lost" in the mail then any other shipper in the history of the US Postal Service! Interesting! I will never order anything from Flatspot again, and I suggest that you don't either! 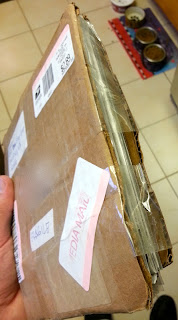 To make matters worse, just look at how this was shipped. Surprisingly none of my records were too damaged, but this has to be some of the worst packing I have ever seen, EVER. All of the records were  in the jackets of course (ringwear city) and it was just two flimsy pieces of card board wrapped with tape. I'm amazed that all the records weren't destroyed. I'm sorry Jake, but if he ever does send your records, there won't be much left of them if they are sent all the way to the UK in this manner.

And now for your viewing pleasure, another fine episode of people behaving badly. LOL @ the guy running around on the freeway selling knock off jerseys.