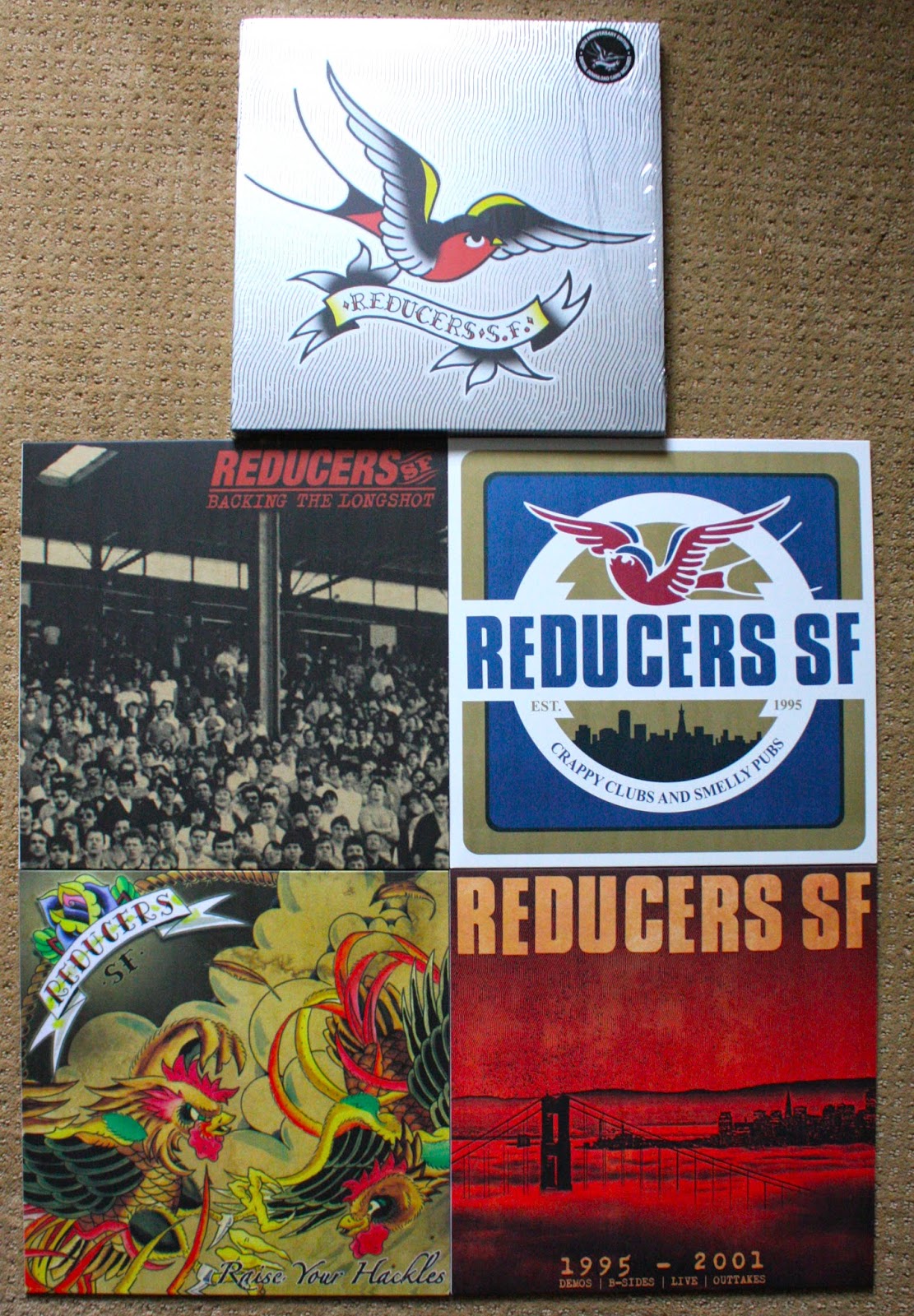 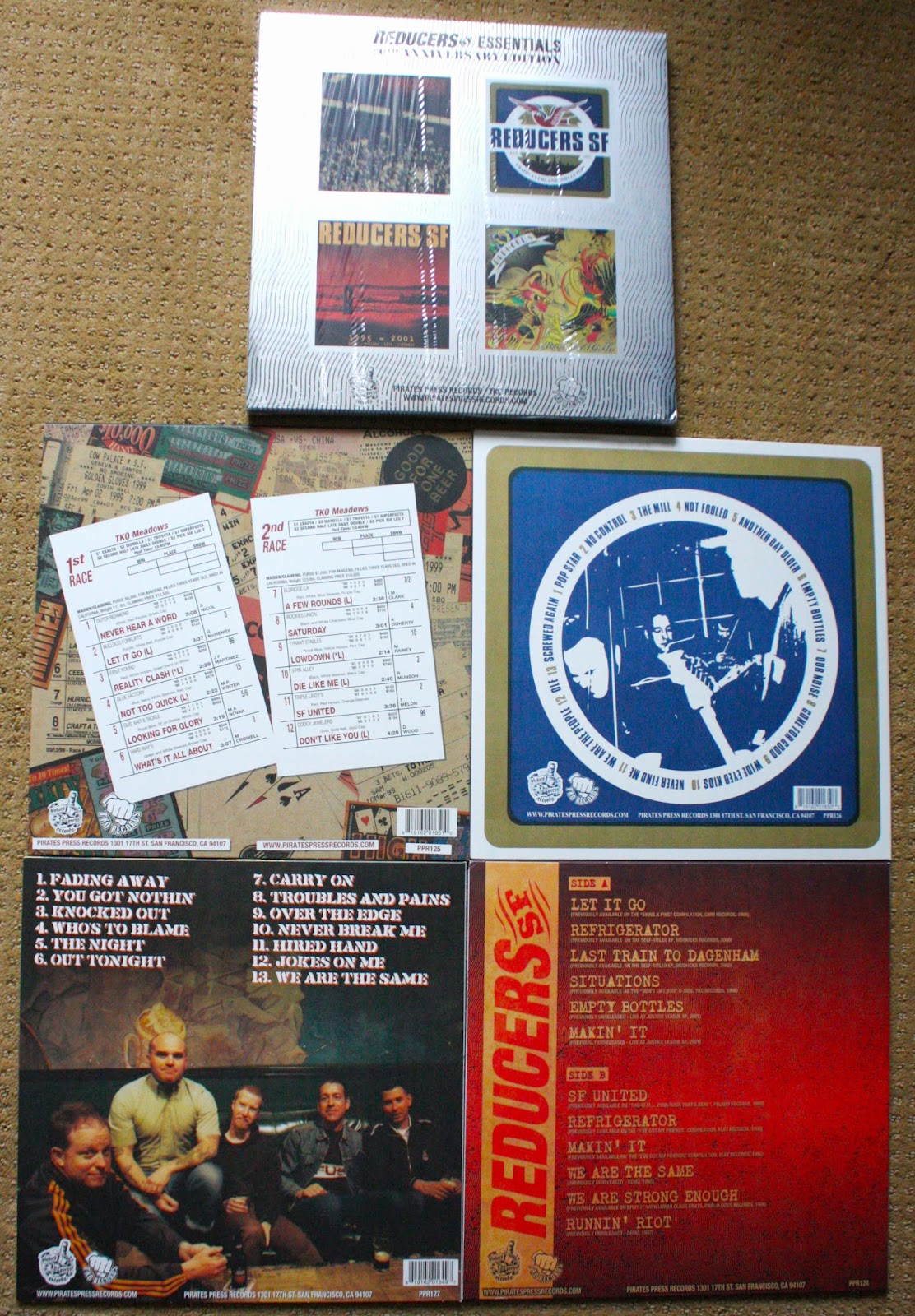 As evident in my second post ever on this website, I am a huge Reducers SF fan. Reducers SF are West Coast Oi!/Punk rock legends that have been mostly dormant over the last decade. I grew up on this band, and would go see them all the time. They were a huge influence on me to say the least. When Pirates Press records had their 10 year anniversary weekend, they announced a Reducers 20 year anniversary box set (Has it been that long? Jeez...). It came in a nice silver box with all three of their albums and a brand new "B Sides" style collection LP which I was thrilled to get.

There was three pressing versions, with a total of /500 pressed. TKO Records had the most limited press out of /50 with all of the records on gold vinyl. Revelation had the largest pressing with /350 and each record on a solid different color (blood red, bronze, royal blew and piss yellow). I opted for the over the top Pirates Press version out of /100 but by far the most unique. 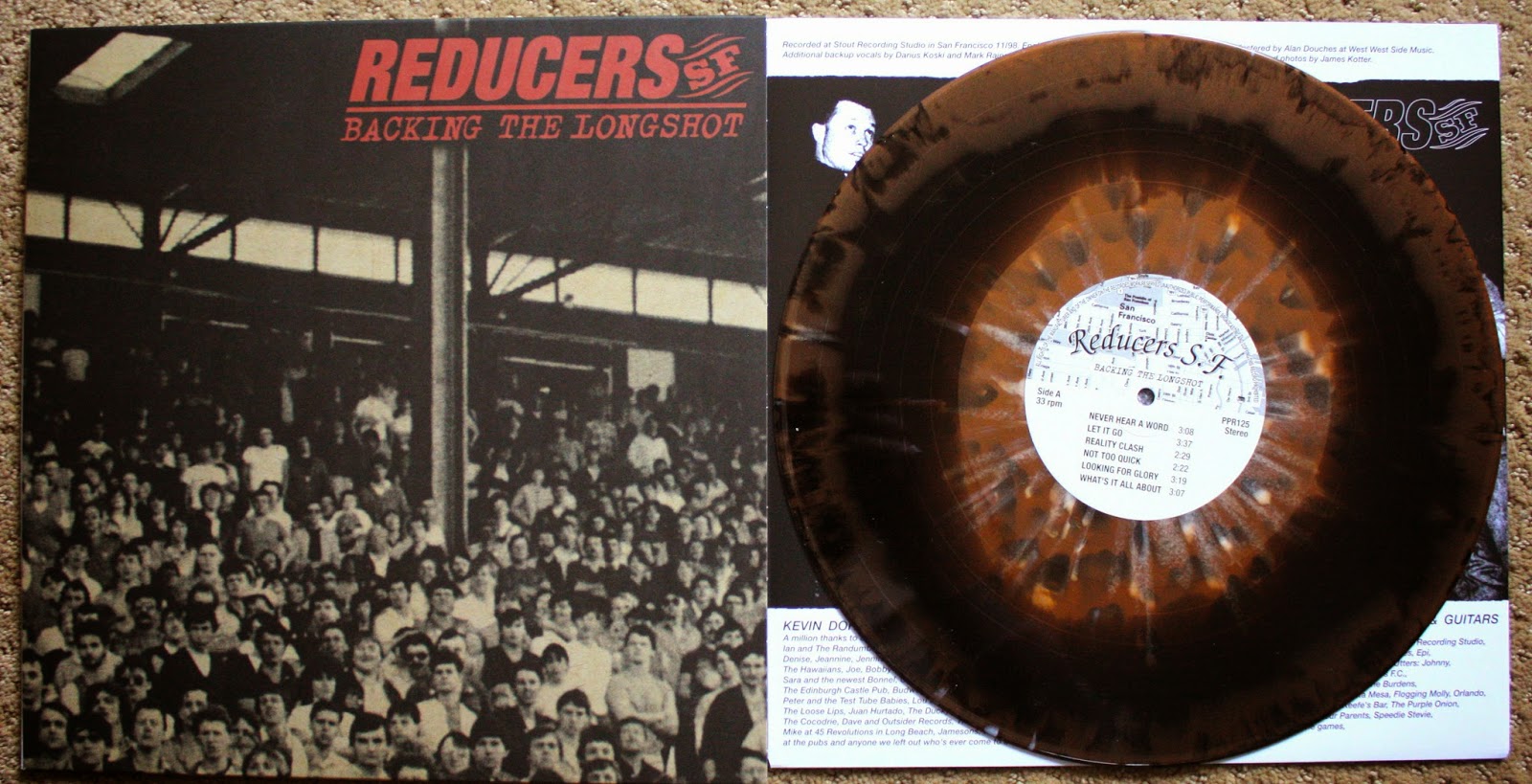 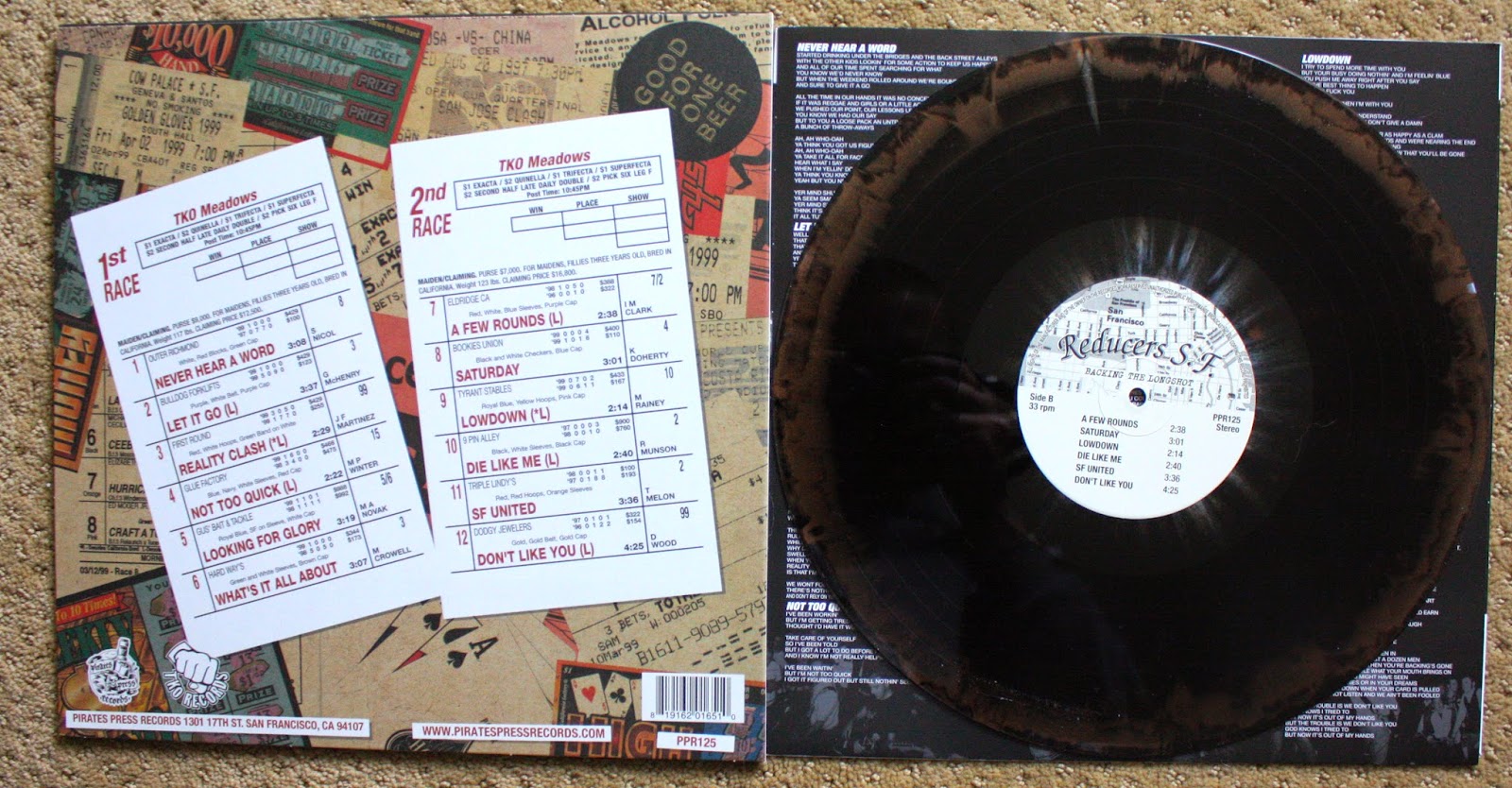 Here is their debut LP (1999) and my favorite of their work. This is arguably one of the best Oi! releases ever made, a total classic. This version comes on "Bronze and Black A-Side with White & Beer Splatter vinyl B Side". 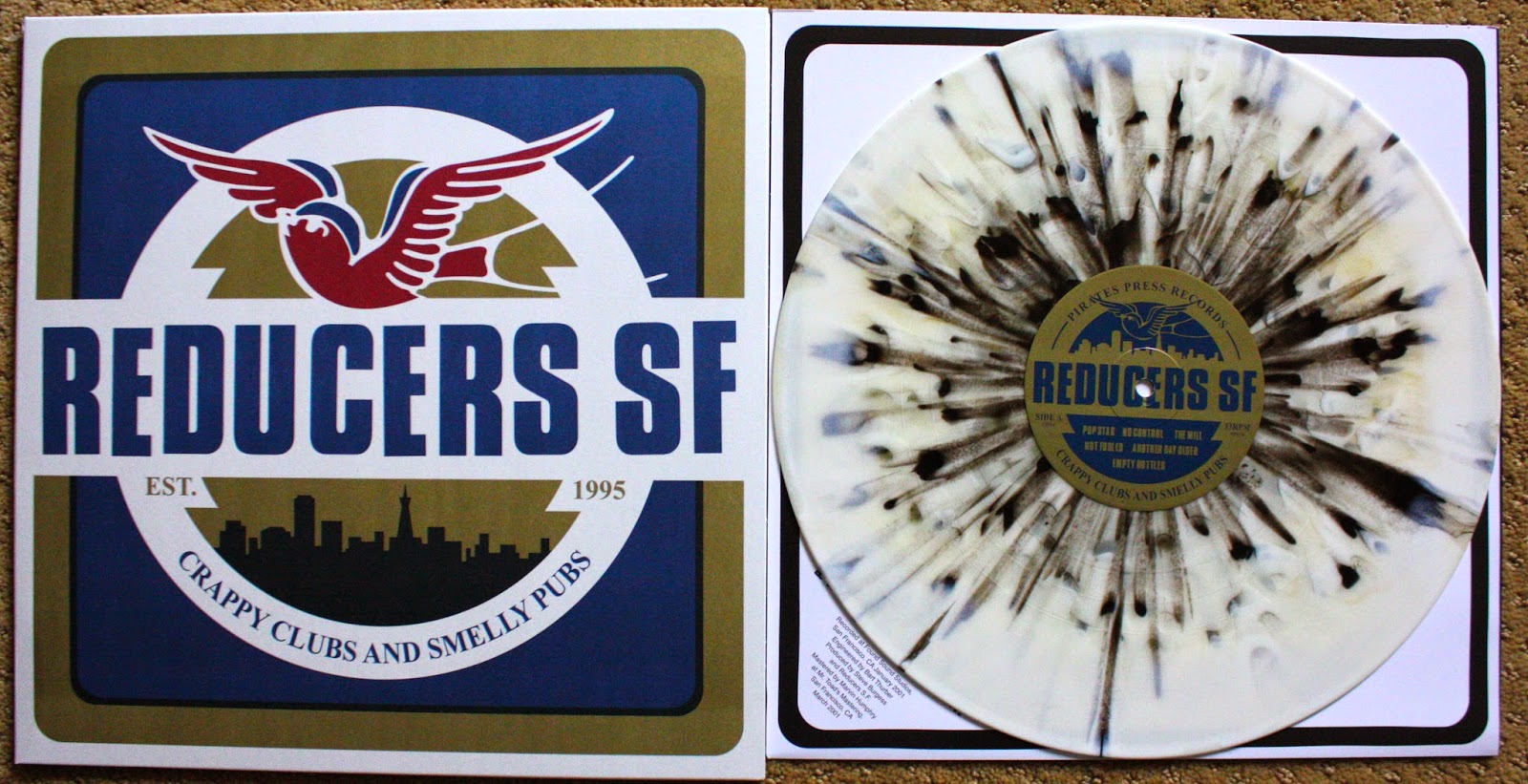 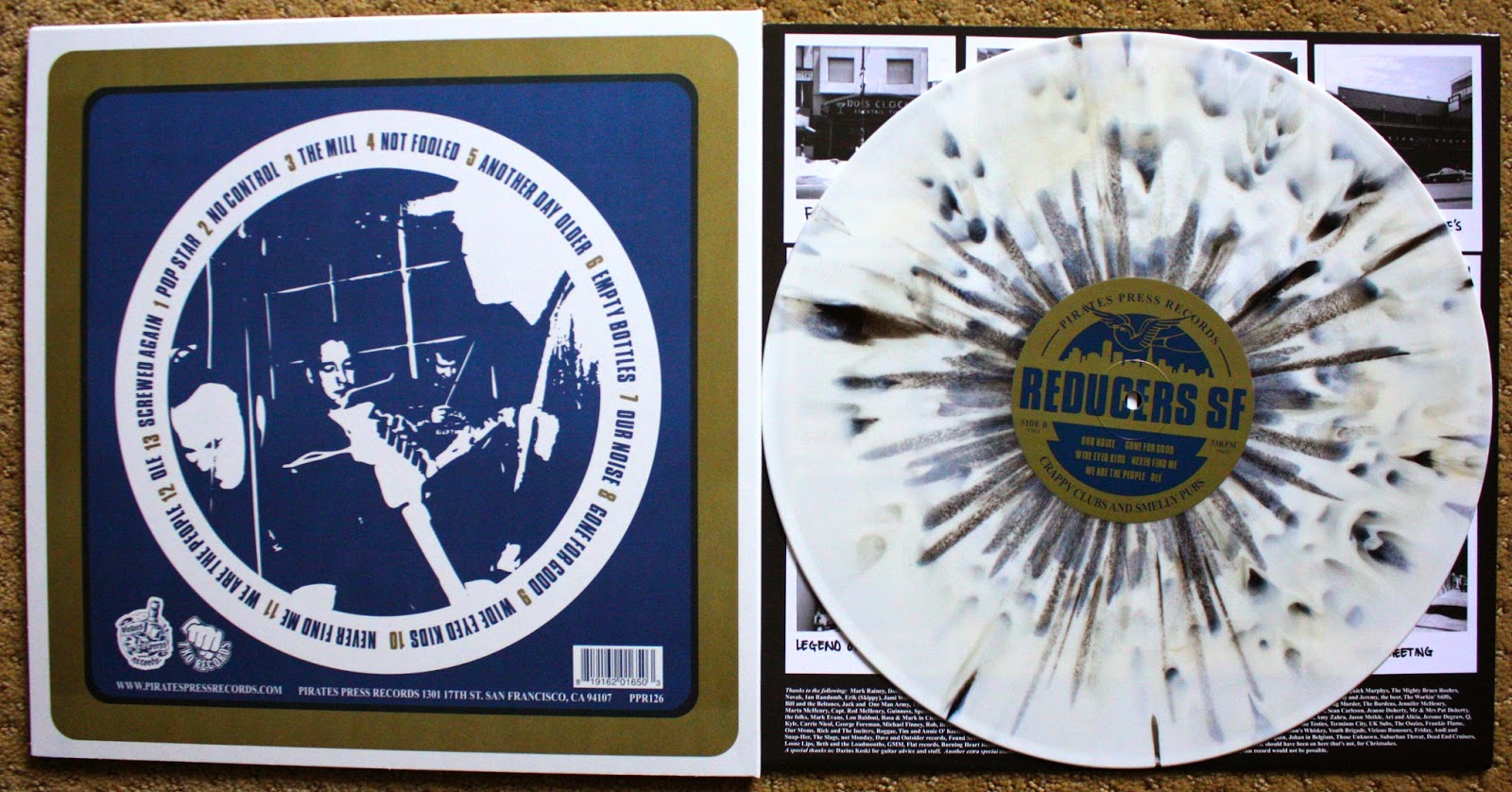 Here is the bands second release, "Crappy Clubs and Smelly Pubs" (2001). Many consider this is their best work, and this is also considered a classic Oi! album. I absolutely love this album and it has my favorite Reducers song on it (Empty Bottles). Also I love the nod to the Randumbs on here with a "Our Noise" cover. For those of you not familiar with the Randumbs, they were a really fast and angry punk band and the Reducers took the song and made it way slower and catchy, and they sound nothing alike. It's awesome. Randumbs version comes in at two minutes, Reducers version comes in at three minutes and twenty seconds. This is on "Royal Blue and White A side with Gold, Royal Blue, and Black Splatter B-Side vinyl".

On a side note I was lucky enough to go to the record release show for this album at the Pound in SF. Unfortunately, my 14 year old ass got beat up in the parking lot after the show. Oh, the good old days! 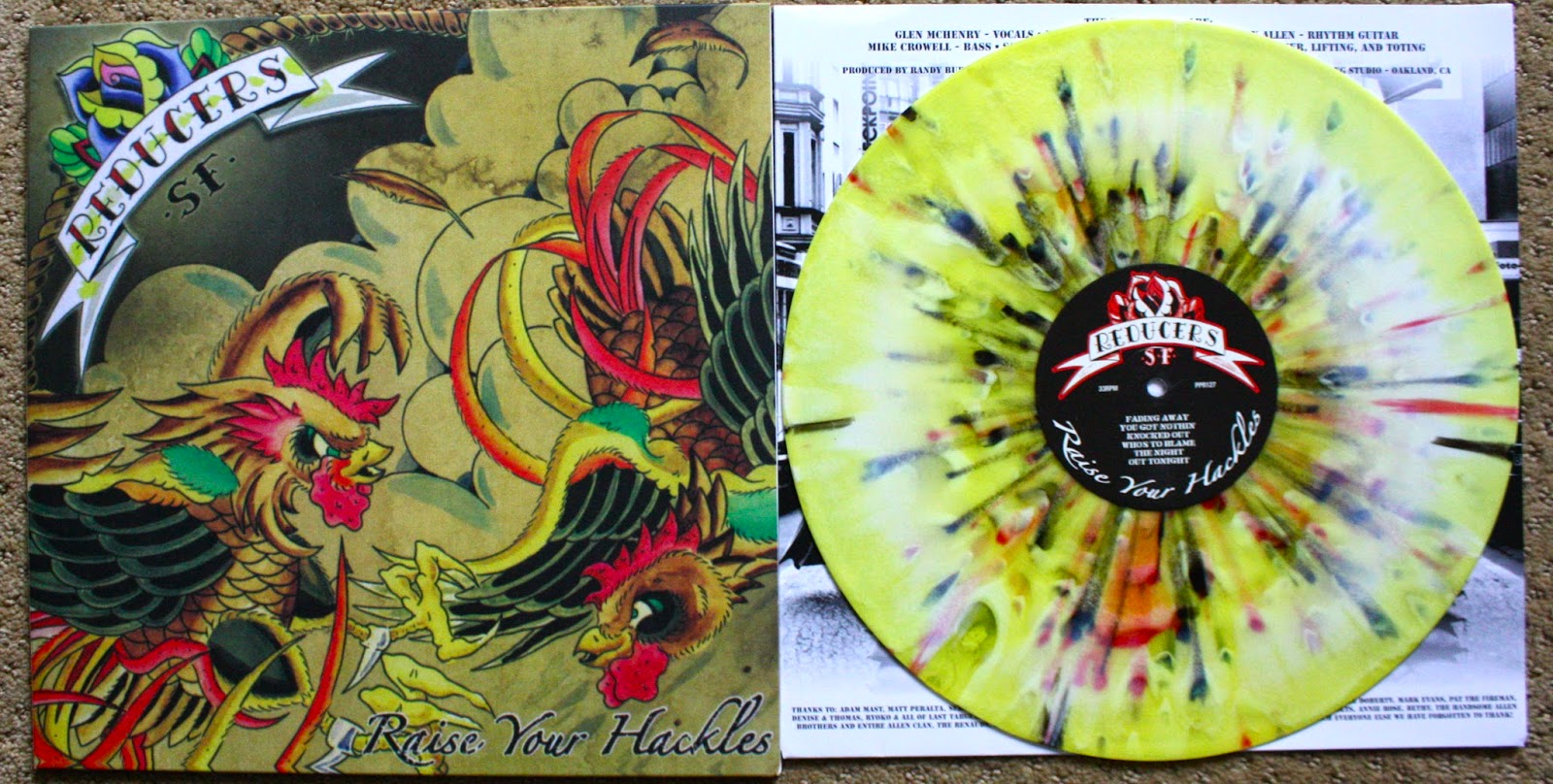 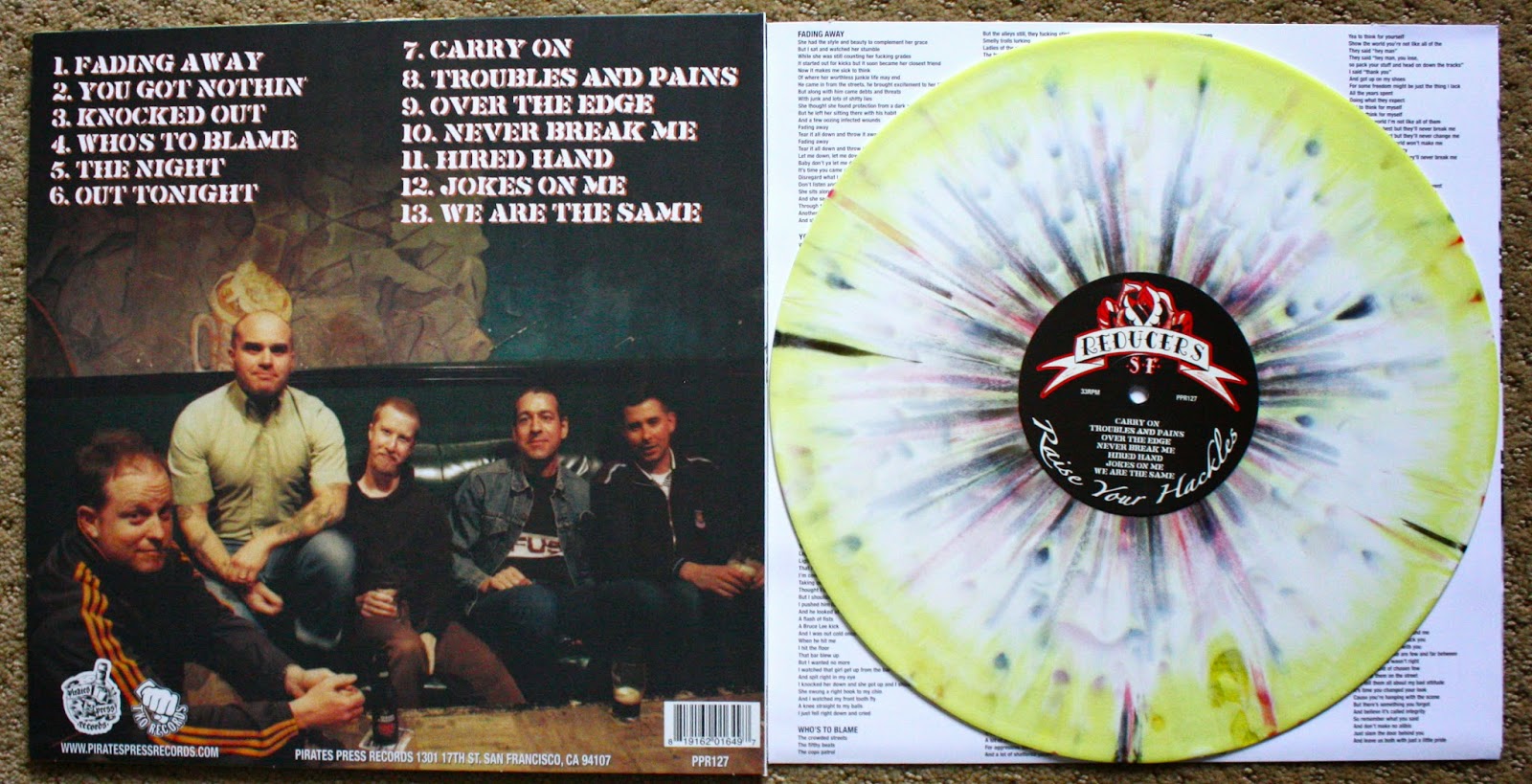 "Raise Your Hackles" was their latest release (2006). This is a good solid release, but I guess I never had the same love for it as it's younger brothers. Looking sharp on "Yellow and White A side with Gold, Yellow, Red, and Black Splatter b-side". This is probably my favorite looking pressing of the bunch. 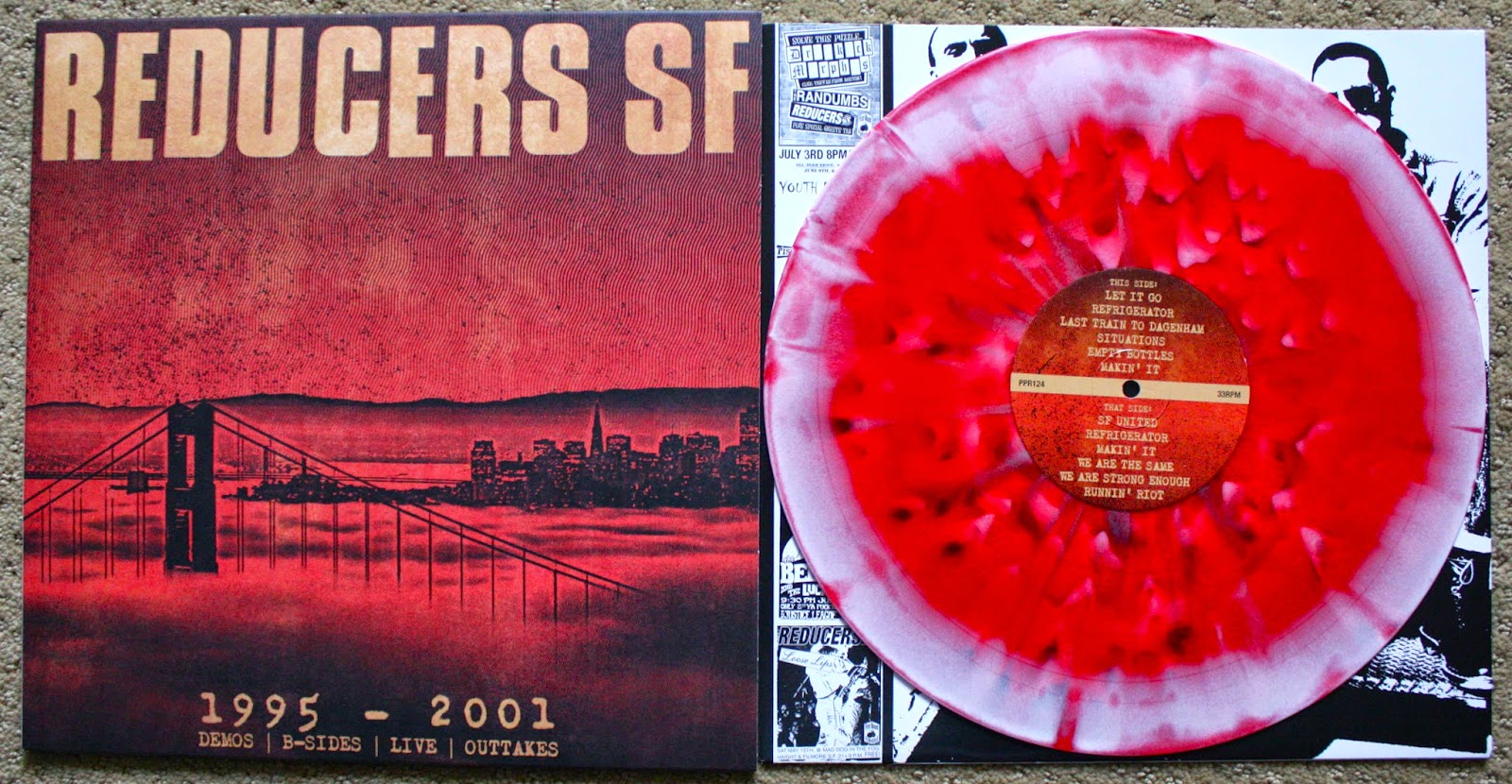 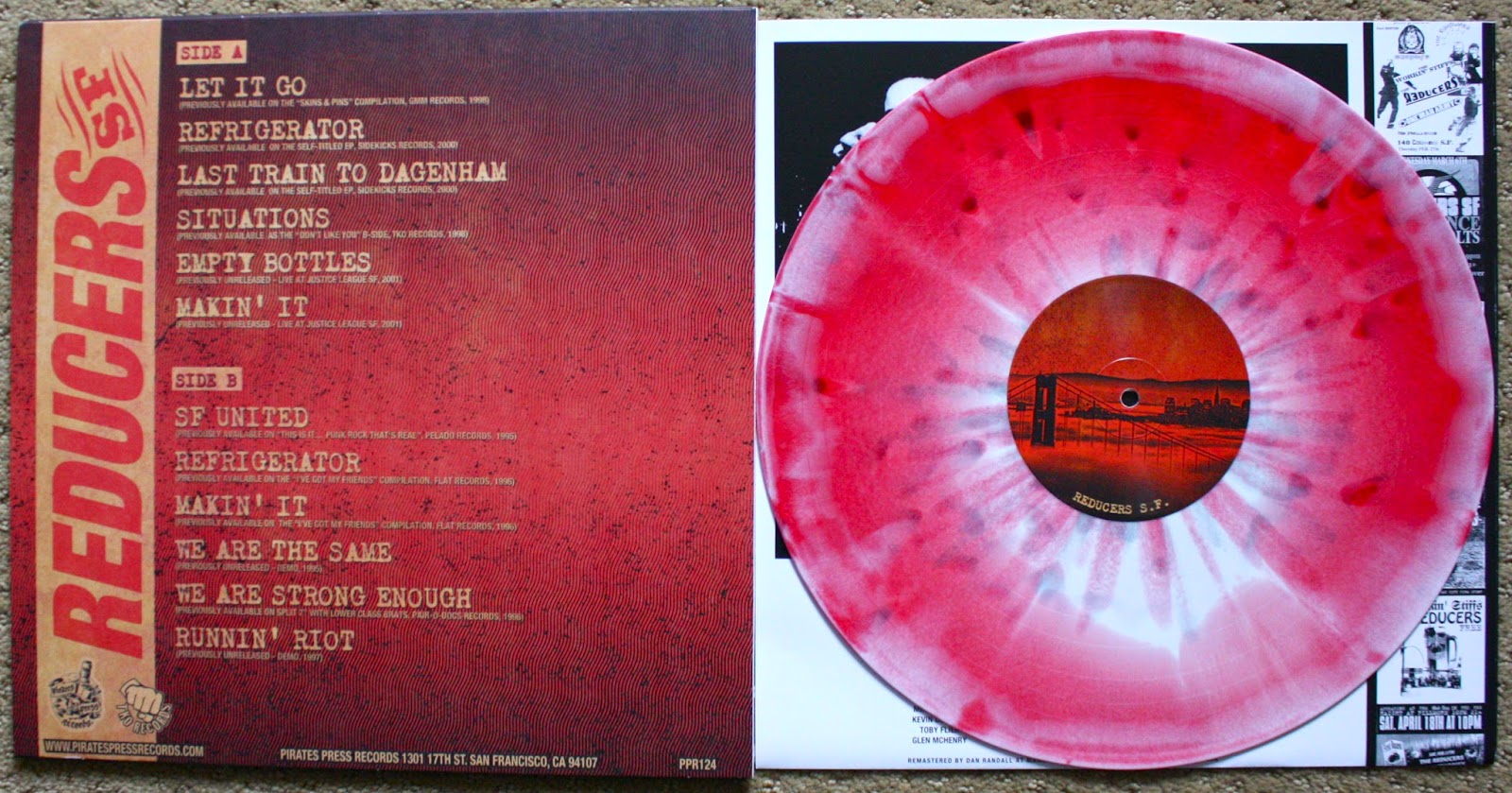 I was most excited to get this out of everything. First thing I did was rip this thing open to get the digital download of this. Getting a download of Reducers covering "Situations" and "Last Train to Dagenham" is worth the price of admission for this box set alone. All of this stuff was either unreleased or incredibly rare, so I'm thrilled to get my hands on it. It comes on "Red and White A side with Red and Silver Splatter B side." 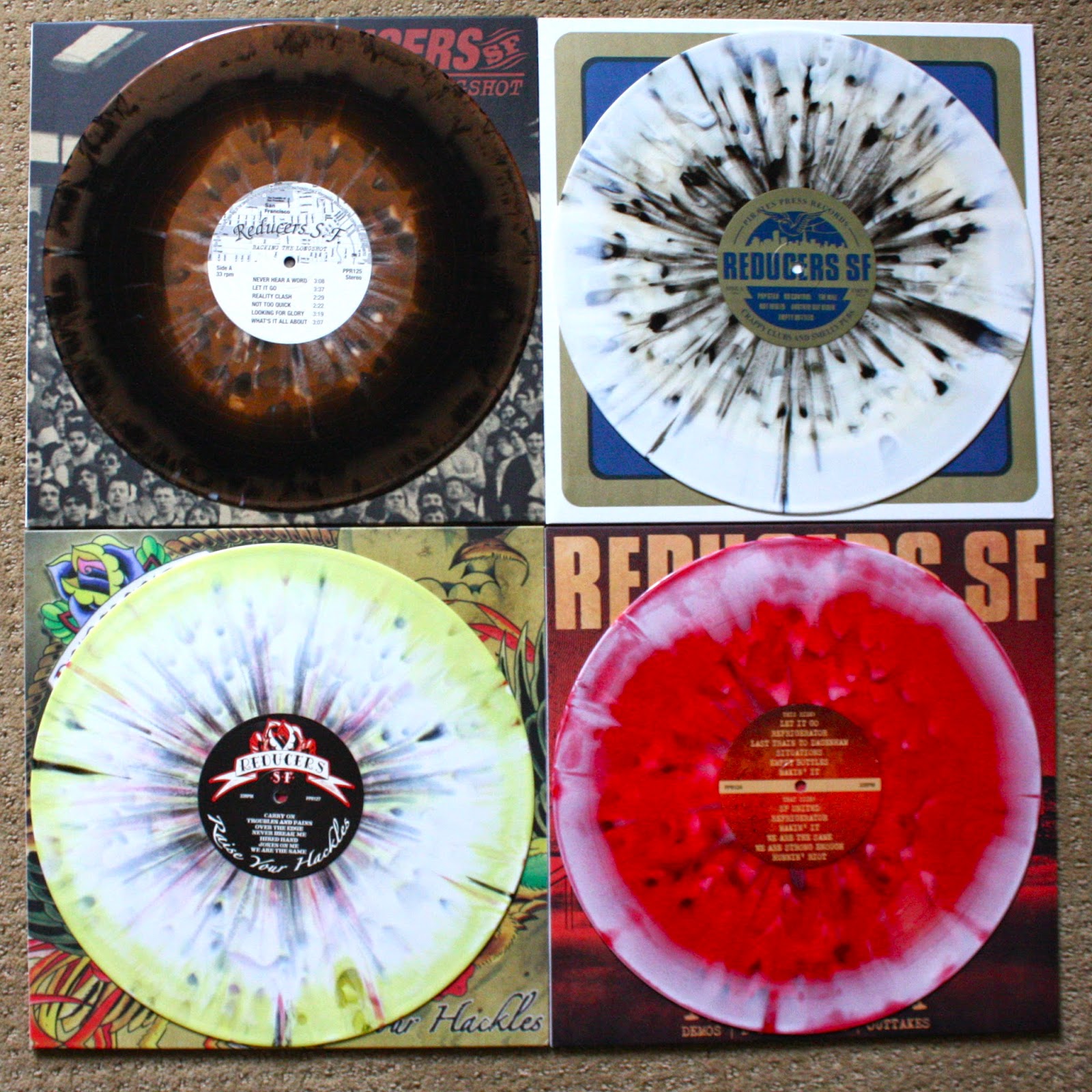 Looking good Reducers! Great job Pirates Press, and thanks for bringing one of the Bay Area's best Oi! bands to the fore front for a new generation to enjoy.

Posted by Across Your Face at 8:39 AM