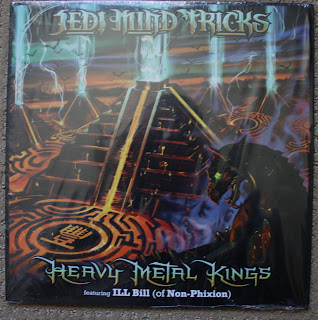 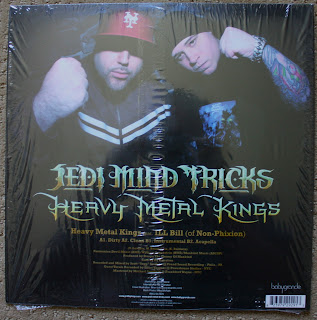 Ok, so follow me here. "Heavy Metal Kings" is a group consisting of Ill Bill and Vinnie Paz from Jedi Mind Tricks. Before they were an official group, this was a single put out in 2006 for Jedi Mind Tricks LP "Servants in Heaven, Kings in Hell" which featured Ill Bill. At the time the single was pressed on plain blue vinyl and has been extinct forever. I never even remember hearing about it and they are pretty impossible to find. Turns out, that 100 copies turned out on a turquoise vinyl as a pressing plant mistake and were held back by Babygrande. They just reissued these this year and they sold out right away, but luckily I was able to snag one before they were gone. This is a true piece of rap history and I'm glad I scored a copy! 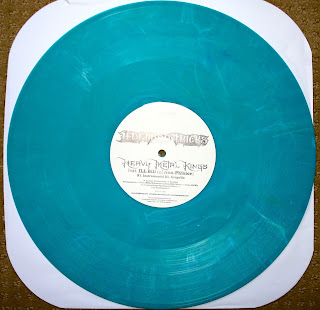 Looking AMAZING on turquoise marble out of /100. This is a classic track to a classic album. Vinnie Paz and Ill Bill, does it get any better than that? For you hardcore kids out there, both of these rappers have been down with the hardcore scene for years and give shout outs in a bunch of their lyrics. If you don't know Jedi Mind Tricks, Vinnie Paz, or Ill Bill then I suggest you go check that shit out ASAP. Below is the original music video for when this came out.